STERLING HEIGHTS – During eight of the first nine seasons of MHSAA Girls Bowling Finals, either Vandercook Lake or Sandusky made the championship match to end the winter.

And after meeting – and splitting – the last two Finals matches, it seemed only right that they met to decide a title again in year 10 at Friday's Division 4 tournament at Sunnybrook Golf and Bowl.

“We were really hungry for Sandusky,” Vandercook Lake senior Becky Cecil said. “We worked our butt off and got our scores up, so if it came down to Vandercook and Sandusky, we would be ready for them.”

After being separated by only six pins with three frames to bowl, the Jayhawks pulled away for a 1,322-1,166 victory to give themselves two of the last three championships – Sandusky finishing first in 2012.

Facing Sandusky always provides a chance to measure his program.

“That’s who you want, is the best,” Reichard said. “I’m very proud. We set a goal, we wanted to get back here and bowl Sandusky, and we’re right back here now. And we got what we wanted, and I’m thrilled to death.”

Sandusky coach Gordon Williams said he was “extremely proud” of his young squad this season.

And he agreed that the teams seem to bring out the best in each other as they seemingly meet annually in big competitions.

“We always expect to see them at this point,” Williams said. “It was a great match; it was a close match until the last three, four frames. They have an excellent program. I've got nothing but good things to say about them.”

Posing with his team and the boys championship trophy was extra special for Riverview Gabriel Richard coach Bob Stempien, who was able to share the moment with sons Austin and Zack, a freshman and junior, respectively, on the Pioneers.

“They don’t see me as coach. They see me as dad, and sometimes that can be an extra challenge; but it’s great,” the coach said.

“Coming here and watching kids do things you didn't think they could do is just incredible,” he added. “I can’t even really describe it, it’s just awesome. I’m just speechless.” 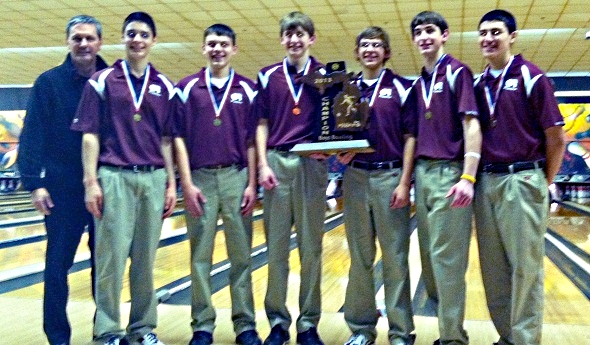 Zack Stempien had similar praise for his Pioneers teammates taking the title.

“It takes a lot of work and dedication, and after you do it, it’s kind of that moment where everything pays off and you have no words for it,” he said.

East Jackson coach D.J. Miller, meanwhile, was proud of the way his Trojans finished the season.

When asked if he believes his young team set a benchmark for the future of the program, Miller responded, “I definitely think they did.”

“They really came through the last two weekends,” Miller added, referring to the Regional and Final. “They bowled extremely well. They bowled up to their potential.”