“It’s been nine years since we’ve had a winning season,” said Martin, who was part of the team’s first outright league title as a senior in 1983. “It gives me goose bumps to think about that.”

But he’s had similar reactions to the outpouring of neighborly support his program has received as it works to start a revival.

Members of the community, made up of about 3,500 residents, have donated $46,000 to go with $15,000 allocated by Maple Valley's school board for the purchase of new equipment that will be used this fall. Some was necessary to fit an influx of players, but the additional funds allowed the program to update and replace some of its older gear as well.

Confidence. Comfort. Swagger. The players anticipate a little more of all three when Maple Valley opens against Fowler on Aug. 28 outfitted in new uniforms over new shoulder pads and with new helmets topping them off.

Those good feelings come with heightened expectations, of course – which are welcomed by a program that made the playoffs seven of eight seasons and played in an MHSAA Final during the stretch preceding its recent struggles.

“It’s coming back. You can feel it,” Maple Valley senior Isiah Garn said. “On the field, the coaches are expecting more … not letting you short yourself. And the community is jumping in on us; there is so much support there. Everyone wants us to be a success again.”

Martin is deeply rooted in the school. His father was a 1953 graduate of the former Vermontville High and started middle school basketball and football and summer league baseball programs in the community before also coaching at the new Maple Valley High School after it opened in 1963. Marty played football for Dan Watson on the Maple Valley varsity after playing junior varsity for Guenther Mittelstaedt, who followed Watson and led the varsity to a 173-70 record over 24 seasons through 2008.

After playing two years of baseball in junior college, Martin came back to the community to work as a postal worker and coach, and under Mittelstaedt helped the Lions to their first playoff appearance, in 1987. He remained on Mittelstaedt’s staff through 2000, then coached a year at Battle Creek St. Philip, four years at Battle Creek Lakeview where he also taught after earning his degree, then with Mittelstaedt again for two years at Lakeview in Montcalm County. 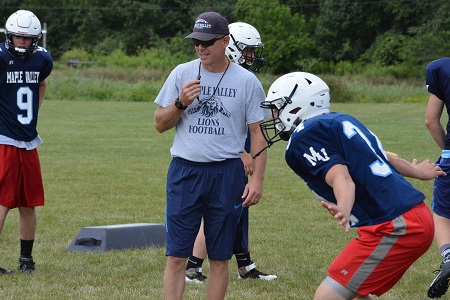 Martin returned to teach at Maple Valley a year ago and became only the third varsity football coach in 30 years during this offseason.

Maple Valley is a little different place than even a decade ago. The school’s enrollment briefly passed 500 during the 2007-08 school year but fell to just over 370 students as of this spring – and Martin said there are fewer than 70 seniors in this fall’s class. The community’s economics also have changed, he added, with fewer families farming or enjoying jobs with General Motors in Lansing or Kellogg in Battle Creek.

Near the top of his to-do list was simply getting more players back into the program. Maple Valley had 40 last year, which at least worked for the amount of equipment the school had in stock.

But 69 students signed up to play this fall and 54 ended up at practice this week – good news, except for the helmet supply.

In addition to new helmets to outfit the new players, Martin also surmised eight more would need to be replaced at the end of this season, followed by 12 more needed after 2016 and 13 after 2017.

Instead, Martin began investigating if his program could get a better price by replacing the entire supply in bulk. After considering two helmets, he worked with his Riddell representative to get a deal on the helmets that included discounts on shoulder and girdle pads as well. The school board responded with its contribution – and then the community came on strong to help the rest of the way.

Martin was called out of class one day to receive a $5,000 check. Then came $1,500 from one family and $3,500 from another. He was at a graduation open house this spring when someone placed a $1,000 check in front of him. Longtime residents, some retired, gave $100; some who had graduated from Vermontville High or the other former school in Nashville, donated a few hundred as well.

Martin’s team spent parts of the summer (and will this Saturday as well) providing muscle to local service projects, but he’s never asked the community for financial help for the program. It just made sense to provide, said 1992 grad and former player and assistant coach Paul Adrianson, whose local business Hickey Electric was among the first to contribute.

“We want people to see the game of football doesn’t just necessarily survive. We think it can thrive if you put safety first or good fundamental education on it,” Adrianson said. “It can be a great sport for our future. … We really feel that if we get all behind and lead as a district and doing safety first, we think that’s going to set a positive trend for the game of football.”

Maple Valley is one of 70 high schools statewide taking part in a pilot sideline concussion testing program sponsored this school year by the MHSAA. The Lions will work with XLNTbrain Sport, which incorporates baseline testing done at the start of the season to assist in return-to-play decisions after possible head injuries at practices and during games.

In addition, the Riddell SpeedFlex helmets Maple Valley purchased include the InSite Impact Response System, a series of sensors that alert sideline staff after a player’s helmet sustains what is considered a significant impact. That player will then be evaluated by training staff; Maple Valley also has a trainer this fall for the first time in 15 years, Martin said. 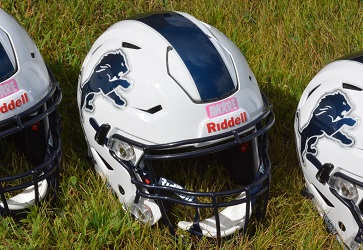 “That was our initial thing. We want our kids to be the safest kids,” Martin said. “We want to be one of those leaders; we want to get this district, this community, out front so everyone in the state of Michigan and the United States knows in this area that people care about their kids to the extent they’re willing to invest $27,000 in purchasing helmets.”

The helmets require reconditioning each offseason and new batteries for the InSite sensors – to the tune of $2,200. But another donor stepped in with $22,000 – enough to keep the new helmets ready to wear for a decade.

“This community identifies with this football team,” Martin said. “So they were ready for a change, and they were looking for this opportunity. I’m very blessed and humbled to think they’re showing trust in my leadership and my coaching staff and in the fact we can turn things around.”

His players have heard the stories of successes past, some before they were born. They’ll try to extend the “look good, feel good” cliché into their play on the field this fall as they work to write a restart into Maple Valley’s winning history that goes with the other renovation projects that are popping up at the school and on its grounds.

“I think there’s going to be tons of people coming out,” senior Brock Weiler said. “It’s the new coach, everything getting re-done in the school. I think the pride’s coming back.”