Hackett held off Macomb Lutheran North to win the team title by nine strokes (684-693) while Cox carded a 74 to go with her 76 on Friday for a two-day total of 150, six strokes better than Frankenmuth runner-up Meg Watkins.

Hackett coach Alan Radomsky stood off to the side of the scoreboard as the team totals were being tabulated. He was comfortable in knowing that his team was prepared to play its best golf, despite the blustery, 45-degree weather.

“I don’t do a lot of coaching when the girls are on the course,” said Radomsky, whose team led by three strokes after Friday’s opening round. “I was confident in knowing that they were prepared to make the shots that would keep us in contention.

“Even though we won by a lot last year (33 strokes), I felt just as good going into the final round this year because I knew the girls would bring their best. That’s the kind of team they are.”

“Lizzie didn’t quite have the round she was hoping for but Naomi and Becca were there to back her up,” Radomsky said, “and that’s pretty much how it’s been throughout the season. They pick each other up, support one another and refuse to let anything get them down.

“This team, more than any other I’ve coached (at Hackett) has truly exemplified what it means to be a team.” 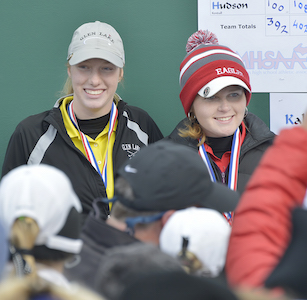 Meanwhile, Cox – who traveled nearly 200 miles from her home in Leelanau County’s Kasson Township (population of approximately 1,500) – felt right at home amid the stiff wind and cold temperature.

“I’m used to it, almost to the point where I look forward to it,” Cox said. “I think I do have an advantage in that the cooler temperatures really don’t bother me.”

Cox said she had a feeling it might be a good day after draining a long birdie putt on the opening hole.

“It started poorly (on hole No. 5) because I pulled my drive under a tree and then had to punch out,” Cox said. “I end up on the back side of the green, a long ways away. Then somehow I manage to sink this impossible, twisty-turning putt for a birdie. I had a feeling some more good things were going to happen.”