You have heard of the Oakridge boys.

No, not the country music quartet best known for its 1981 hit “Elvira,” but the Muskegon Oakridge football team, a perennial playoff power which boasts five championship game appearances and three MHSAA titles.

Now, the “Oakridge Girls” are getting their time on the statewide stage.

The young Oakridge softball team (34-2) hopes to take another couple of steps on its journey at Saturday’s MHSAA Division 2 Regional tournament at Gladwin, starting with a noon game against Cadillac.

“Our big goal is to win a state championship,” said junior ace pitcher Alyssa Fessenden, who is 18-1 on the season. “But that starts with the next pitch and the next at-bat. You have to be focused all the time or you’ll get beat. We learned that last year.”

After advancing to the Division 3 Quarterfinals in 2014, the Eagles never even made it to District weekend last year, falling to neighboring rival Ravenna, 3-2, in a Division 3 Pre-District game.

Fessenden said that loss has helped to bond and focus this year’s team, which has fearlessly made the move up to Division 2 for the first time. That lack of fear starts with an outstanding freshmen class, including shortstop and leadoff hitter Sophia Wiard, big-hitting outfielder Kaylie Piper, and pitchers Kayla Fessenden (Alyssa’s younger sister) and Madison Carroll.

“It has taken a lot of weight off of my shoulders,” said Alyssa Fessenden of the addition of the two freshman pitchers. “Last year, I had to pitch every single game and if I just didn’t have it for some reason, I had to keep going. This year, we have those two who can come in and that takes a lot of pressure off of me and keeps my arm fresh.”

Those three pitchers powered Oakridge to its first Greater Muskegon Athletic Association county tournament championship since 2001, as well as an undefeated season in the West Michigan Conference. The Eagles have continued rolling in the postseason, winning three games at last week’s Division 3 District at Sparta by a combined score of 29-1.

The leader of the Oakridge girls is Joe Coletta, the longtime offensive coordinator of the school’s football team and right-hand man of legendary coach Jack Schugars on all five of the Eagles’ runs to the MHSAA Finals.

“I took over the program because we had a good group of girls coming through that needed a coach,” said Coletta, who coached football at Oakridge for 25 years. “I figured I’d do it for two years. But it has gotten into my blood, and I just love it.”

Coletta has transformed the softball program and helped spearhead the renovation of the school’s dilapidated softball facilities, which he says are now a source of community pride. This summer, the field will get new dugouts, also funded by community donations. 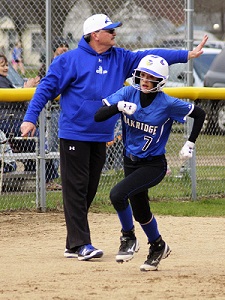 Coletta gives much of the credit for the on-field turnaround to his assistant coach, Red Pastor, who has worked with most of the team’s 14 players since their youth days in the community recreation program, and a tremendous run of female athletes at the Muskegon County school. Oakridge also won a girls soccer District title this year and the girls basketball team has won 50 consecutive league games in the West Michigan Conference.

“This is a very competitive group of girls, but they genuinely enjoy being around each other and pushing each other,” said Coletta, who teaches physical education at Oakridge High School.

Oakridge can score runs in bunches as leadoff hitter Wiard (.513 batting average, 38 stolen bases) and No. 2 hitter Lowe are adept at getting on base, setting things up for the power bats of Alyssa Fessenden (3 home runs, 48 RBIs), standout catcher Hannah Reinhold (6 home runs, 58 RBIs) and Buchner (55 RBIs) to knock them in.

Both of the Eagles’ losses came on the same day – at the Michigan High School Blue Chip tournament at Byron Center, which featured 12 state-ranked teams out of 16 total.

Fessenden hopes the fast pitching the Eagles faced in that tournament will pay off Saturday, when they go up against Cadillac senior ace Gabby Hoagland in the Regional opener. Ironically, Oakridge found a way to beat Hoagland two years ago in a Division 3 Regional game, when Hoagland was pitching for McBain.

Cadillac also will have to find a way to get to Fessenden in what has the makings of a pitcher’s duel. Fessenden sports a 0.96 ERA, 160 strikeouts and just 27 walks in 102 innings pitched.

Fessenden tries not to be superstitious, although she does wear two pairs of socks every game and will do it again Saturday even though temperatures are expected to soar into the high 80s (Buchner is the opposite, wearing socks with the toes torn out).

“Our coaches cranked up the pitching machine at practice this week and moved it in closer, so we’ll be ready for the fast pitching,” Fessenden said. “It should be a great game.”