JACKSON –The East Jackson girls golf team is riding an impressive three-tournament streak. And the Trojans have yet to win a title.

Coach Ray Hill doesn’t pretend to say he knew this was going to happen.

“I really am stunned at what they have accomplished this year,” he said. “All of them worked really hard this summer and played in youth tournaments, and frankly, they didn’t play well. All summer I’ve been trying to calm them down and tell them not to worry if they are shooting 115 in June or 108 in July. That’s not important. We’re focused on the fall.

“I wasn’t sure I was buying it, but I had to convince them, and once the season started, the light turned on and they’ve been getting great scores. All the work they did in the summer paid off.”

Along the way, East Jackson had four girls each break 100 in the same event for the first time in school history. Coach Hill, in his 12th season, already has tabbed this as his best team, but he didn’t expect this much improvement this quickly.

“Before the first tournament, the Northwest coach texted all the coaches coming to the tournament and said all the teams were going to be grouped together and wanted to know what score we anticipated shooting. I said 400, and we shot 392,” Hill said. “The other coaches were giving me a little bit of grief, calling me a sandbagger.”

At East Jackson, finding girls to play on the golf team takes a little work. There is no feeder program, unless you count Coach Hill handing out Tootsie Pops and cookies to any middle schooler willing to hear about the wonders of playing golf.

“I make a point to talk to every middle school girl in our building at some point,” Hill said. “When I’m asked during a school day to sub for the French teacher, I will spend a few minutes talking about golf. 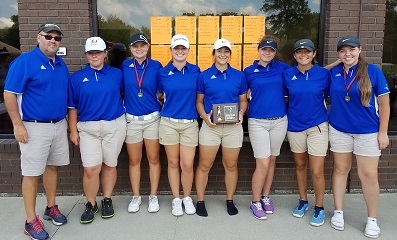 “I have a meeting every year, and I bring Tootsie Pops and cookies to get them to come to the meeting, and it’s kind of hit and miss. I will hand out Tootsie Pops in the hallways if someone will consider golf. “

Hill gets a lot of disinterested or confused responses. Most of them have never played golf in their lives and plan to try out for the volleyball team. Hill has a ready answer for them.

“They say, ‘I’ve never played before,’ and I say, ‘You’ve never been taught before, and once you’re taught, it comes along,’” Hill said. “The first year you just learn how to hold the golf club and hit a shot here and there, and the second year you’re ready to take off.”

This season, East Jackson has four freshmen on the team, one season after having three freshmen – so the Tootsie Pops and cookies must be hits. But in the end, the game of golf is the selling point.

“If I can get them out to the golf course a time or two, I can usually keep them,” said Hill, who also tells the girls and their parents what they can expect from being an East Jackson golfer.

“One, it has to be fun, and I try to keep things loose,” Hill said. “I buy a lot of ice cream, we have snacks, and we make it fun and keep things light and loose. Number two, they are going to improve. They’re going to get better throughout the season. Every time they come to the golf course, they’re going to be better than they were the day before. It’s not fun to do a sport or anything in life if you’re not getting better.

While Hill likely would like to bring more experienced girls into his program, he sees a positive side to their relative inexperience.

“I don’t have to unteach everything that Uncle Larry taught them, and as beginners, they are open to instruction,” he said. “They want to get better. I look for athletic kids who are smart.”

Sophomore Alexis Brzezinski has been the No. 1 player so far. She is averaging 88.6 for 18 holes and earlier this week she broke the school record with an 84. She had virtually no experience as an eighth-grader – just two years ago.

“I started playing right before my freshman year,” said Brzezinski, who earned honorable mention on the all-conference team last year. “I got into a lot of junior clinics with Mr. Hill before that and then I took a lesson. I started getting into it when I started getting better.

“I realized that golf is a really hard sport. I didn’t know what I was getting into. I had played volleyball before. It’s a really challenging game, and you are always batting yourself and you’re never satisfied with your score. There is always something you can do better. I love that about it.”

Zoe Swiatlowski, a two-time all-Cascades Conference selection, is one of three seniors on the team, and she is averaging 94.0 for 18 holes. She joined the golf team as a freshman basically because her older sister Savannah was a senior on the team. 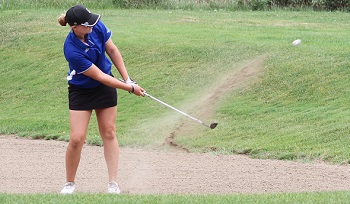 “I really wanted to play volleyball instead,” she said. “I got talked into it, and then I ended up loving it. I thought golf was so boring and dumb. I realized there was a lot more to it. I thought that it was probably just really easy, and it was something you do when you’re bored, but it’s really competitive. It’s a lot more fun than I thought it was going to be.”

One of the things she likes best is the ability to get to know opposing golfers.

“You get to meet a lot of new people,” she said. “It’s not like basketball where you just see them for a half a second and they are running away. You can talk to them for like five hours at a time.”

And then there is senior Alessandra Mireles, a senior who was all-conference as a sophomore but missed half of last season after being in a serious car accident. She is playing with a metal rod in her leg. She is averaging 102, and Hill said “her swing is regaining form” as she continues to recover.

Mireles went out for golf, not so much because of the Tootsie Pops, but because she had a good friend who was on the team.

“She really wanted me to play golf,” Mireles said. “I was like, ‘I might as well try something new.’ It was an acquired taste. Not a lot of girls our age play golf, so I didn’t know if it was for me, and I was trying to play volleyball at the same time, so I wasn’t sure what I wanted to do.

“Now, I just love my teammates; that’s what makes me want to play. And wherever you go, any golf course, they’re so nice. It’s the environment that I like to be in. I would like to play in college, too, but either way, I’m still going to play golf.”

While those three girls have the top averages on the team this season, East Jackson’s depth is helped by Sami Andrus, Reagan Rudd and Jordan Goostrey.

Hill is a realist. He knows the Trojans are not going to break the school record every time out this season, but the girls aren’t as convinced.

“I told them we have to be content with having a blip here or there, and the girls wouldn’t hear of it,” he said. “They all talked about leaving four or five shots on the course, and they felt like they could do better. I see it, I absolutely see it, but I don’t expect it to happen every time.”

While confidence is soaring, a major obstacle keeps the Trojans grounded. It is perennial power Jackson Lumen Christi – the team that finished first in each of the three tournaments this season in which East Jackson set a school record.

The Trojans are very aware of Lumen Christi and that program’s success.

“They don’t have that intimidation factor, and the Lumen girls are a nice group of girls. Still, we’re gunning for them. I don’t think we have the scores yet to get them, but we’re getting closer.”

The Trojans do not shy away from the topic of Lumen Christi. It is obvious the respect is there.

“It doesn’t make us cocky,” Swiatlowski said of having Lumen Christi in the same area. “It might be overwhelming that we are doing so good, but they kind of knock us down. Even when they have a bad round, someone else steps up, just like we do as a team, but they’re just a little bit better. It helps us work harder.”

East Jackson understands it is all a process.

“We’re used to fifth, sixth, seventh, eighth, ninth-place finishes, so second place to one of the top programs in the state is quite an accomplishment,” Hill said. “We’re very proud of that.

“The girls look at all the schools they have beaten and some of them are two or three times larger than we are. They are real excited and proud of that, and we’re trying to maintain it throughout the years.”

Hill concedes that his realistic team goals for this year already have been rewritten because of the excellent start.

“We finished fifth in the Regional, and the top three go to the state meet,” he said. “We’ve never really come close to going to the state meet as a team. I’ve been able to take five girls individually to the state meet over the years. These girls want to go, and if they can sustain the scores they are shooting right now, we’ll be in good shape.

“Qualifying for the state meet as a team would be huge, but Lumen Christi is at our region and Napoleon is in our region, but three teams go, and we feel like we’re in position to do it.”

Along the way, Hill takes pride in seeing the girls learn to play the game of golf and learn to love it.

“I’ve had five girls who had never played golf before their freshman year at East Jackson go on and play in college,” he said. “That’s huge. One of them is an assistant coach now at Siena Heights University, and the opportunity started here. That’s the most rewarding part for me.”

PHOTOS: (Top) East Jackson's Zoe Swiatlowski watches a drive during an event this fall. (Middle top) The East Jackson team poses with one of its two tournament runner-up plaques earned this month. (Middle below) Alexis Brzezinski fires from a sand trap during one of her rounds. (Below) Alessandra Mireles watches her approach from the fairway (Photos courtesy of Ray Hill.)