KALAMAZOO — When he was just 3 years old, Max Keenan was out in the yard kicking around a soccer ball.

With a father who played and coached professional soccer, Keenan was not just kicking, he was learning.

“We’d go in our front yard and we had a net and he’d just come out and play with me,” the Hackett Catholic Prep junior said. “He’d have me dribble, shoot, do whatever.”

Those fundamentals have paid off.

Keenan is part of an Irish squad that is 6-0-2 so far with an eye gazing toward the MHSAA Division 4 soccer tournament in November. Led by Keenan and junior Brennan Creek and bolstered by an experienced and talented cast, Hackett debuted in the first state coaches poll of this season as the No. 4 team in its division.

The Irish have flirted with a Division 4 title, losing to Burton Genesee Christian, 3-2 in overtime, in the Final two years ago and Muskegon Catholic Central, 4-3 in overtime, in a Semifinal last year.

“The special part for me is I played Michigan high school soccer,” said Max’s dad, Chris Keenan, who was born in Manchester, England, and came to the United States at age 14. “There’s a tradition here, and to watch Maxwell go through it and play in those events is just unbelievable.

“His freshman year, Hackett played in state final. He had an unbelievable season. I played in the (MHSAA) Final with Gull Lake and actually lost that game, 3-2 (to Grosse Pointe Woods University Liggett in 1983).”

Chris Keenan also was runner-up for Michigan’s Mr. Soccer Award in 1984 and made the all-state Dream Team.

Now he watches his son begin the journey.

“Maxwell has grown up around soccer his whole life,” his dad said. “I would watch soccer all the time, so he would grow up almost like a gym rat. 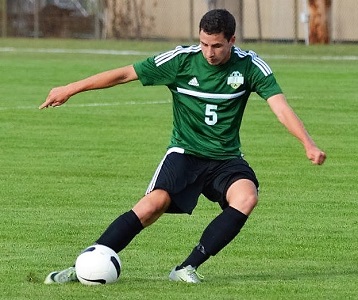 “He is nationally known. We have a lot of colleges right now interested in him.”

Max Keenan and good friend Creek give the Irish a powerful 1-2 punch.

Keenan leads the team with 12 goals, while Creek has nine. Each has four assists.

“Max and Brennan were on the field together from probably 4 years old,” Chris Keenan said. “They’ve participated and trained. They’ve got these skill sets.

“They’re both being looked at for D-I (college soccer). For me, I look at those two, I think having each other as teammates they’re a force to be reckoned with right now.”

“We’re fortunate to have all sorts of competitive teams in our conference and nonconference schedules,” Hackett coach Ian Troutman said. “Divisions 1 through 4, the teams that we play or scrimmage, most of our offensive players make an impact right away. But Brennan and Max definitely draw a lot of defensive attention.

“They really help us open up everything else, and in some circumstances they can be dominant on their own.”

Said Creek: “The harder competition makes us play more defensive. In the playoffs, defense wins games. It’s just preparing us for the best.

“The Mattawan game didn’t feel like a win, but it was definitely a success.” The win against GRCC “was a big one; that was huge.”

Troutman took over the Irish reins three years ago.

With the open position and with his son entering his freshman year, Chris Keenan said he had no desire to apply for the job, although he has a solid pedigree: two NCAA Division I national championship games as a player; induction into three halls of fame including Gull Lake’s; his selection as the 14th pick in the 1988 professional draft; a pro career with the San Diego Nomads and Detroit Rockers; plus his time as a pro soccer coach and owner of Kingdom Indoor Center since 2004.

“The head coach makes substitutions, gives the team talk. I like being on the bench to be involved, to watch. Ian’s a really good coach. I want my relationship to be dad-son, not coach.”

Starting on the varsity team as a freshman was a challenge, Max Keenan said.

“It was pretty hard,” he said. “We had big seniors I had to go against, but I think after a while they started giving me more respect after I kept scoring goals and playing well.”

He and Creek grew up playing together on club teams and push each other on the field.

“It’s just kind of a competition,” Keenan said. “We always try to one-up each other. Since we’ve been playing together for who knows how many years, we just have a really great connection.

“If he moves, I know where I’m gonna go and he’s gonna give me the ball. It’s just like we’re on the same page every single game.” 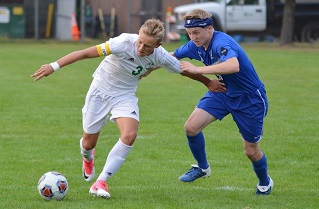 “I think the two goalkeepers we have that were switched back and forth have benefited from the competition and just driving each other to improve,” Troutman said.

“Breyton’s done very well and he’s certainly a starting goalkeeper some days, and he can come off the bench and make an impact as well.”

Troutman said Carr has been a platoon player since his sophomore season.

“The skill set from baseball has transitioned well to goalie, and it has served us well in many games.”

Carr was a defender before going in net.

He said sharing time in net can be difficult.

“That just means I have to work harder in practice,” Carr said. “Usually when I’m on the sidelines, coach has me throw on my game jersey and I go in on defense or in the game somehow.”

Getting in a playoff game, even briefly, whetted Franklin's appetite.

“It was during the playoffs (last season) and I got to have one save against Lawton, and then I came right back out,” he said. “It was a great experience.

“Watching how the game’s played at the varsity level drastically improved my view of the game: the increased speed of the game, what I have to do. My expectations rose. It gave me a better standard.”

More keys to this season will be sophomores Connor Wurtz, Hough and Anders Johansson, Troutman said.

“They started in the state semifinal game last year as freshmen,” he added. “They continue to build off that experience from last year.”

Keenan and Creek are not only Irish teammates, but they have three Super Y League national titles between them. Each has one and they have one together playing on the Kingdom club team.

Creek sees a difference between his roles on his high school and club teams.

On the club team, players are the same age but “in high school, I try to help out the younger kids and help them improve.

“The competitive side of soccer makes it fun. That’s what I enjoy,” he added. “Since I’ve been younger, day in and day out, I’ve been working hard and practicing every day. Getting frustrated at myself for messing up is probably the hardest part.”