Duffey, coming off her fourth Macomb County championship and a repeat Macomb Area Conference Red title as well, ran the state’s fifth-fastest time of last weekend to win her third Regional title and earn the Michigan Army National Guard “Performance of the Week.”

The standout senior has won all of her races this fall except one, finishing second at the prestigious Portage Invitational last month to Traverse City Central standout Sielle Kearney. But Duffey is surging heading into Saturday’s MHSAA Lower Peninsula Division 1 Final at Michigan International Speedway, with her Regional time of 17:48 at Algonac her fastest this season and another sign of her return to form. Despite having plenty of success as a sophomore and junior – Duffey still won 15 of 18 races in which she competed – she accomplished it fighting multiple stress fractures, shin splints and last year an iron deficiency. Her Regional time last week was her fastest since setting her personal record while taking third at the MHSAA Finals as a freshman. She also finished third at the Finals last year and 14th as a sophomore.

Duffey likewise has been an ambassador of the running program at her school, helping the team to grow again this fall under first-year coach Bryan Stewart. She’s also a track star with school records in the 800 (2:14.83), 1,600 (4:50.36) and 3,200 meters (10:38.04) to go with her program-best cross country time – that 1,600 time placed her second at this spring’s MHSAA LP Division 1 Final. Meanwhile, Duffey carries a 4.0 grade-point average and will continue academically and athletically next year at Michigan State University, where she’s considering studying something in the sciences.

Coach Bryan Stewart said: “Karenna is a very hard-working and dedicated individual. She shows this in all aspects of her life. She works just as hard at school as she does at running. Karenna has been great to work with since I started coaching her last spring. It's pretty special when an athlete has a lot of talent and has a work ethic to really develop that talent like Karenna has over her high school career. Her mom (Debbie) and dad (Chris) also are extremely supportive of her running and really go out of their way to help her. … Karenna really sets a good example for the team on how important school is along with working hard during practice and making sure she gets her weekend runs done. Over her career, she has battled through some tough injuries as well and came out an even stronger athlete.”

Performance Point: “Where our start line was, the first 200 meters we were going straight into the wind,” Duffey said. “So I went behind the girl who went out first. And then once we turned, that was right about when I took the lead, and from there I just steadily kept on going. The course itself was pretty nice. It was flat so it wasn’t that challenging. Some parts of the grass were a little soggy, and back in the woods where it was just a dirt trail, there were a lot of spots – I kinda stopped running. I had to walk around one mud puddle, actually. I slipped a few times, but I didn’t fall. I think the girls race I was in was maybe the third or fourth race of the day, so the other kids got the course a little dirtier than it was, but the finish was fun because we finished on the track the last 300 meters. Overall, I think it was a good effort, and I think I’m well-prepared for the state finals on Saturday.”

Fast start, then stumbles along the way: “I think my freshman year I was a lot more naïve. I didn’t know much about running. I think my ego was pretty big because I went into the state meet thinking, ‘OK, I have a chance to win. Winning as a freshman would be so cool.’ But I actually didn’t win. … My parents were never runners; my school isn’t very big into running. We don’t have a huge team or anything, so it isn’t like I’ve been training for cross country my entire life. I finally just walked into it and was – not in an arrogant way – but good at it. (But) after my freshman year I battled through two stress fractures, and I also last year had an iron deficiency. My sophomore year at the state meet in the 2-mile for track, I thought everything was going great … (and) the last 40 meters I was in seventh place and a girl accidentally clipped my heal, so I got scraped up and I got a concussion from that. Obviously, I’m a lot more experienced now. I think my mentality toward racing now is a lot different. I know all of the things that could go wrong, versus, ‘OK, I’m going to go out and kill it today. I could beat anybody.’ I think I’m a little bit more timid I guess, but also a little more cautious. But I think that’s a good thing.”

Back to the beginning, but better: “I also think I’m a lot stronger. My freshman year, I wasn’t as strong. I got out-kicked in the final 300 meters in cross country. Now that’s kinda what I do to everybody else, is I (out-kick) them. That’s how I’ve won a few races. I think that’s definitely my specialty, and that helps me a lot. … I really wasn’t sure if I would ever be back to where I was freshman year, which was obviously scary because basically for two years I wasn’t racing at the same level as I was as a freshman. I’m definitely happy to be back to where I was, and in my eyes, a lot stronger.” 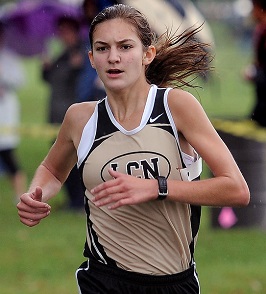 Leaving a legacy: “I’ve tried to help create an environment where people aren’t afraid to try things, especially at our school with the 15 kids that we have, boys and girls, that do cross country. A lot of them, it will be their first sport or something they try out and they never expect to like it, and then they end up liking it. So I try to encourage people to join, but it’s very difficult because a lot of them are like, ‘Running is really hard work. I hated running the mile in gym class; why would I like doing it with a team and at races?’ I’d really like people to join because they’d be able to start something too. Maybe at first you might not be (great), but you’re never going to know how good you can be, unless you try it. Because especially in running, it takes years and years and years to turn into what you really could be. A lot of people have great potential, but they never really start it so they don’t see where they could get. I would say try out for a season or maybe a month or two and see where you get from there. The couple of people I have tried to get to do it, they usually stick with it.”

Final stretch: “There’s a chance my grandfather will be there at the race, and he’s never seen me race before, so I’d like to show him what I’m capable of because he’s heard stories about me but he’s never gotten to witness it. So I’d like to make him proud. … I do think I’m capable of winning, so if I don’t win I think it would be more of a disappointment than if I took second just because I think I’m capable of winning almost any race – obviously not winning against an NCAA champion or anything – but it all depends on how the race rolls out. What sort of moves I make, that sort of thing. I think I have to be there mentally for me to win, so I’m just preparing myself for anything that could possibly happen.”

PHOTOS: (Top) Macomb L'Anse Creuse North's Karenna Duffey pushes out in front of the pack during a race this season. (Middle) Duffey is hoping to improve from third last year to first Saturday at the LP Division 1 Final. (Photos courtesy of the L'Anse Creuse North girls cross country program.