A top-four finisher in both the 50 and 100 freestyles as a sophomore, Turak entered Friday’s prelims seeded second in both races. Her winning 50 time was 77 hundredths of a second faster than her lowest entering the weekend – an almost unheard of drop in time for the shortest race – and she cut an also-impressive 73 hundredths of a second off her top 100 time entering the meet by winning that title in 49.79. Both finishes broke her previous school records in those events. She also swam the first leg on the 200 freestyle relay that won in 1:34.67, and the anchor on the 400 freestyle relay that won in 3:26.35. Both relays also qualified for All-America status, and both entered the Finals seeded third.

Turak will be part of the final senior class at Harrison, which is set to close at the conclusion of the 2018-19 school year. It’s becoming a bittersweet good-bye – she’s excited to be able to honor the school as one of its final graduates, but of course sad to see it close. She will continue to represent though as she goes on to college swimming – she’s sifting through options with more sure to come – and she’s considering studying something in the biology or medical fields. Turak carries a 3.7 grade-point average as part of Harrison’s rigorous International Baccalaureate program.

Coach Kyle Kinyon said: “Her coaches and teammates are so proud of her for achieving a goal she set out to accomplish at the beginning of this season. She obviously is talented, but her success is rooted in her preparation in practice. Ashley is constantly looking for feedback about her technique and training. She routinely pushes herself to be better, as well as encouraging her teammates to do the same. Turak leads the team by her example in and out of the pool. She does the little things right, including proper nutrition and dry land training in addition to her sprint training. It is for this reason she was named a captain of the team as a junior this year.”

Performance Point: “I think the hard work really paid off, because for the whole season my coach kept telling me the end goal is the state meet,” Turak said. “Going into the state meet, I definitely wanted to make a statement, work with my team to get us as high of a placement as we could. I guess my biggest takeaway is you’re going to keep getting better. But with that, you’ve got to keep working hard to get there. … The first day I wouldn’t call it the best day, but I still (cut) time which was good. I guess the second day I was just really fired up going in. I didn’t feel as nervous for the meet and I just wanted to do what I could for my team, because being seeded first (after prelims) in two of my events going in, it was just really pumping me up.”

Making her move: “A year ago, I didn’t even think I would be in this position. I was racing (Brighton) senior Taylor Seaman, and I looked up to her and saw her as a role model. I never would’ve expected to come near her times and even break her state record in the 50 free.”

Farmington pride: “Farmington’s swim program has always been something that has been growing and developing, and we’re getting more and more great swimmers every year. And all of the swimmers are growing individually and as a team. So it’s obviously great to see (this year’s LPD1 champion) Mercy achieve all these things, because they’re the best swim school in the state for girls. When the (Mercy) girls were actually on the podium for first place, my team was chanting “representing Farmington swim program.” It’s pretty cool to come from the same place and have two top teams finishing there. And it’s great for my team because we’re newly developed – we’ve only been a team for two years. So going from last year placing 13th to third place, that was really awesome.” 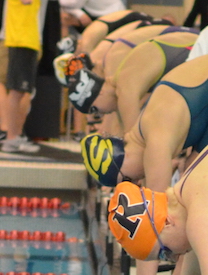 Last of the Hawks: “It’s obviously really sad because we’re seeing the student body (enrollment) is dropping. But it’s really cool to be able to represent Harrison in its final years and be in the last graduating class. My friends and I were actually at a Harrison football game a few weeks ago, and it’s really cool talking to the alumni. They were sharing their experiences about how they went here in the ‘80s and how we’re going to be the last class to represent, and that resemblance of pride in the school. It’s really sad that I’m not going to be able to go to games in the future as an alumni, but I like being able to be the class that represents the closing of it.”

Serving notice: “Swim has always been very underappreciated here, especially the girls team because our boys … have been winning a lot of league titles, which is really cool to watch and awesome to see them do that. The girls kinda being underdogs this year, and coming in winning second in the county of Oakland and third in the state of Michigan for D1, I think it’s cool that we’re making a statement now. I think people are starting to notice, because on Monday swim actually made the announcements before football, which never happens. And I’ve been getting a lot of congratulations in the hallway, and I’ve been noticed by my principal, so it’s really cool that our swim team is actually being noticed.”

PHOTOS: (Top) Farmington/Harrison's Ashley Turak receives her championship medal for winning the 50 freestyle at Saturday's Lower Peninsula Division 1 Finals. (Middle) Turak, third from bottom, prepares to launch for the start of the 200 freestyle relay. (Click for more from HighSchoolSportsScene.com.)