The Panthers’ standout won the 100-yard backstroke (52.02 seconds), took second in the 200 individual medley (1:56.80) and swam on winning 200 medley and 400 freestyle relays Saturday as West Ottawa – then ranked No. 4 in Lower Peninsula Division 1 – defeated No. 1 Ann Arbor Skyline 104-79 and No. 3 Birmingham Brother Rice 111-72. The victories moved the Panthers into top spot in the rankings this week, as Maas earned the Michigan Army National Guard “Performance of the Week.”

Maas’ backstroke time from the weekend is the fastest in Michigan this winter, and his 1:56.08 at the East Grand Rapids Classic ranks sixth in the IM. He finished second in the backstroke and seventh in the IM at last season’s LPD1 Finals, with his times that day – 50.04 and 1:52.93 – his career bests at the high school level. He also owns the USA Swimming state age 15-16 record in the 200 breaststroke of 2:02.61, set as a member of the West Ottawa Swim Club at the USA Junior National Championships East in December.

The school records in both the backstroke (48.49) and IM (1:48.30) are held by Derek’s older brother Kyle, a 2016 West Ottawa graduate who finished LPD1 runner-up in both events as a senior and now swims at University of Alabama. Derek is considering joining his brother after high school among a number of potential southern college options, and also is a fan of University of Michigan athletics. Maas also played tennis as a freshman and sophomore and ran track as a freshman, and he might pick back up one or both of those sports after this swim season is complete. He carries a 3.94 unweighted grade-point average (4.49 weighted) and is considering studying medicine after high school; he lost his 4.0 when he got an A- in Algebra II – while taking the class as a fourth grader.

Coach Steven Bowyer said: “Derek has had a significant impact on the overall success of our program. Derek received all-state honors as a sophomore in the 200 IM and 100 back. In his junior year, he will play a significant role on our state meet relays, and his individual points will be key in helping our team achieve its goal of a top-4 state meet finish. … Derek's success has come from years of hard work and long hours in the pool. He understands both the amount and type of training that is required to excel at the highest level in this sport. He is also a student of the sport, spending time studying his stroke mechanics and researching ways to increase his efficiency. Derek's work ethic and technical understanding of the sport give him a combination of skills that make him tough to beat. … In pursuit of individual excellence, Derek has always placed team success over his own. Derek understands the better the team gets, the better he gets and vice versa. Our team is training at a very high level right now, in part to the example that Derek sets on a daily basis. Derek also sets an unprecedented example in the classroom; he defines the term student athlete. In addition to the hours he puts in at the pool, he maintains a rigorous schedule of advanced placement courses. We are very proud to have Derek representing our program.”

Performance Point: “I was happy about the 100 back time – it was my season best – and also our relays swam great,” Maas said. “A lot of us had the fastest splits, especially on that medley relay. We came pretty close to setting the pool record – we were like 0.06 (seconds) away, and that was a pretty good in-season time for us. … Our team was really excited for that meet, especially. That was a big confidence booster for us, and I think that everybody after that meet really realized that we have a chance to do really well at the state meet. So I hope that that will make us work even harder, and by the end of the season we’ll be able to accomplish our goals.”

Depth in the deep: “We just have a lot more depth than we had years in the past. A couple of years ago we had Tabahn (Afrik), and he won two events (at the 2014 and 2015 Finals), and then Spencer Carl did the last couple years. But besides just a couple top swimmers, they didn’t have the depth we do this year. This year we have a really solid group of 7-10 swimmers. We’ve all been excited, even starting at the end of last season and starting the summer season. We all were really excited for the state meet coming in March.”

Swim family: “Kyle’s at Alabama right now, and my sister (Jenna, a senior) is thinking about swimming in college. And I also have a younger brother (eighth-grader Kevin) who I think is going to be pretty fast. I think he’ll make a much bigger impact than I did my freshman year. … The best part is whenever I’m at a certain point in a season, I’ll know how I’m doing because I can compare it to my brother’s times. And also, whenever I talk to him about swimming, he always pushes me and gets me motivated. Even my younger brother and older sister do too. We all push each other. Last year I compared all of my times to Kyle’s, and I used to text him about that. He was like, ‘Let’s wait and see if you get my varsity records.’” 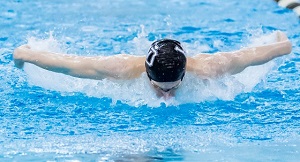 High flier: “My family really likes (U.S. world champion sprinter) Caeleb Dressel. I read in this one SwimSwam article that he had like a 42-inch vertical (leap), and that’s insane. You can see how that makes him way better on the walls, so that made me more focused on box jumps and dry land (training) and increasing my vertical leap than I had been in the past. I’ve worked on it a lot this year; I’m probably just average right now, but I’m trying to improve that. I can dunk, and Kyle can too.”

Paging Dr. Derek: “Both of my parents are doctors, and they’ve always told us we could be any kind of doctor we want, all four kids. Recently my dad has been opening up the options, but it’s most likely I’ll go pre-med, and that’s what Kyle is doing right now at Alabama. I haven’t looked into it a ton, but I know I’d like dermatology and maybe surgery.”