“That was exciting,” Bebble said, “just as exciting as it is now.”

Now, Bebble is a senior and the Snowbirds are in the Quarterfinals again – for the fourth time in eight years and the second time since Bebble has been on varsity.

This time Bebble is hoping St. Mary (23-1) can reverse a trend when it faces Chassell (24-1) on Tuesday at Sault Ste. Marie

“Every year we‘ve been in the Quarterfinals we’ve lost by one or two points,” she said. “We’re excited to get back and try to beat Chassell.”

The Snowbirds lost by two points to Crystal Falls Forest Park in 2012, by two to Climax-Scotts in 2013 and by one to Mount Pleasant Sacred Heart in 2016.

Bebble and Alex Hunter were starters on the 2016 squad. And now the best friends are the catalysts of a senior-driven team that’s rattled off 23 consecutive wins after a season-opening setback at Clare.

Four seniors start for the Snowbirds.

“That’s huge,” first-year head coach Pat Schultz said. “We have a lot of experience where it matters – handling the ball. We have guards that can control the game for us.”

The 5-foot-3 Hunter and the 5-5-Bebble are joined by 5-4 junior Olivea Jeffers in a three-guard lineup. Hunter was an Associated Press first-team all-state pick a year ago. The tallest starters are 5-7 Maggie Schultz and improving 5-8 center Emily Myler.

To compensate for lack of size, the Snowbirds like to press and run – and then run some more.

“We like to get out in transition, push the tempo,” Schultz said. “Our kids are in good shape. We can get up and down the floor. Plus, we can defend.”

Those are the hallmarks of this team, which is outscoring the opposition by an average of 32 points (61-29). Only two teams, Rudyard and Cedarville, scored more than 50 points, and St. Mary won those two Regional games by 22 and 10 points, respectively.

After the loss to Clare – “We’d like to have that one back,” Schultz said – the Snowbirds met all challenges.

“We came together as a team around January,” Hunter said. ”Everyone focused on finding their role and realizing what that role was, no matter how big or small.”

Bellaire, whose only other loss was to Class B Kalkaska, edged Rogers City in double overtime to claim last week’s Regional. The Snowbirds, meanwhile, defeated Rogers City by 35 in early January to start an impressive five-week run that also included wins over Bellaire (41-39 and 38-32), Lake City (60-35) and St. Francis (41-29). St. Francis, which played in the Class C Final two years ago, won the Lake Michigan Conference this winter.

That five-week window opened some eyes.

“We started to believe we might have something in January,” Schultz said. “But when we went to St. Francis, which is a perennially strong program, and held them to 29 points, well, we walked out of that gym with a little swag that night. I think the girls felt if we can play like this we can play with anyone in Class D.”

Schultz said he can go nine deep in his rotation – juniors Megan Loffer and Emma Jo Cherwinski are usually the first two off the bench – but it’s Hunter and Bebble who set the tone.

“She’s a great shooter, a pure shooter,” Schultz said. “You give her an open shot and she’s as automatic as any girl.

“She’s a hard worker, too, a disciplined kid.”

Her infectious upbeat attitude rubs off on her teammates.

“Alex is awesome to play with,” Bebble added. “She’s been one of the most committed (players) all the way through school. She’s makes the rest of the team better.” 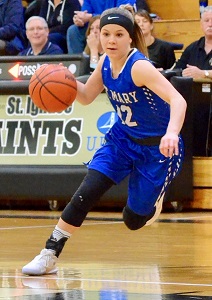 Hunter’s scoring average is down from a year ago, but that’s more by design as St. Mary has spread the points around.

“I had a super strong season last year, but I realized what this team needs from me isn’t always scoring 20 points a game,” Hunter said. “I’m not scoring as much, but I definitely feel I’ve (contributed more) in other ways to help the team. It’s whatever the team needs each game, whether it be assists, defense, drawing defenders to the corner (to open up the offense).”

Hunter is fourth on the school’s all-time scoring list with 1,260 points. She was fourth in the state a year ago in three-point shooting (46 percent) and is 16th all-time statewide in assists (493) and 35th in steals (375). She’s only missed one game in four years.

Bebble’s scoring average is up as she’s elevated her game. The four-year varsity veteran is averaging 11.5 points, 5.1 rebounds, 3.7 steals and 3.6 assists. She scored a career-high 26 points in the Regional Final.

“Averi’s a unique talent,” Schultz said. “She’s not a pure shooter like Alex, but she is so quick. She can be a nightmare (for opponents).”

Schultz put the ball in Bebble’s hands against Cedarville, utilizing clear-outs to take advantage of her quickness in space. Hunter added 14 in the win.

“She can lock down on defense,” Schultz said. “She’s the definition of a pestering defender. You can’t get rid of her.”

Bebble and Hunter have been playing basketball together since second grade.

“She’s stepped up and had an awesome year,” Hunter said. “It’s all come together for her. She’s super quick, pushes the ball, gets to the rim on anyone – and plays defense on anyone.”

The two play off each other, too.

“I know where Alex is going to be on the court, and she knows where I’m going to be,” Bebble said. “It’s easy between us. We’re always in sync with each other.”

Bebble’s sister, Jada, was on the Quarterfinal teams when Averi was the water girl. Her cousin, Kari Borowiak, was the star player then. Borowiak is now an NAIA All-American at Concordia – she was the only NAIA player to average 20 points and 5.5 assists this season – and she still follows the Snowbirds. Borowiak quickly retweeted a Gaylord Herald Times tweet about Bebble’s efforts against Cedarville.

It’s been quite a first year for Schultz, who formerly coached the junior varsity and was an assistant to Dan Smith the last two seasons. Schultz also coaches the school’s volleyball and softball varsity teams.

“I know these girls,” he said. “This group makes it easy.  A lot of people could have come in this year and looked good coaching because this team gets it. I make some adjustments, motivate, and chew on them a little when they need it, but for the most part they make the adjustments that most coaches have to make. They understand and that’s because they’ve played so much basketball, including travel ball. They can auto-correct really well.”

Myler’s developing presence inside, and her ability to guard bigger opponents, has helped alleviate a concern there.

“We’re not a super tall team, but we have posts who work hard,” Hunter said. “Heart over height.”

That will be put to the test Tuesday against a talented and taller Chassell squad that won its first Regional in school history by overcoming a 14-point deficit to beat Bark River-Harris in overtime.

“Chassell’s a great team,” Hunter said. “Anyone left at this point is tough competition. We’re excited for the chance.”

“They’re big, and they’re good,” he said of the Panthers. “We don’t want to allow it to become a half-court game.

Who will have that combination Tuesday?

PHOTOS: (Top) Gaylord St. Mary’s Averi Bebble drives to the hoop during Thursday’s District Final win over Cedarville. (Middle) The Snowbirds’ Alex Hunter finds an opening to the lane during the 61-51 win. (Photos courtesy of the Gaylord Herald Times.)