The Vikings’ three-year starting libero has been part of three Class C championships and has her team pointing toward another run. Lasky had 16 digs, an ace and 12 passes in serve receive without an error as Division 3 No. 2 Bronson downed Division 1 No. 6 Battle Creek Lakeview to win the final of last weekend’s Portage Northern Invitational – earning Lasky the Michigan Army National Guard “Performance of the Week.”

Lasky is one of 10 finalists for this season’s statewide Miss Volleyball Award after earning all-state as a junior and sophomore and all-region as a freshman. Playing libero, she has 293 digs, 56 aces and 33 assists this season and has passed the ball 302 times in serve receive with only 19 errors. During her career, Bronson is 194-31-11 including 27-3 this fall. She set her school record for career digs as a junior, and her total now stands at 2,488. The Vikings beat Lakeview in three games at Portage after sweeping Wayland, Otsego and Stevensville Lakeshore. For the day, Lasky finished with 70 digs, 10 aces and seven assists.

A three-sport athlete as a freshman and sophomore, Lasky also is an all-league basketball player who has helped that team to multiple District titles. She also played softball her first two years of high school and is considering running track next spring. Lasky will sign this fall to continue her volleyball career at Davenport University, and she carries a 3.8 grade-point average. She’s worked on her family’s flower farm since the start of elementary school, and she’s interested in studying business management and marketing and starting her own business down the road.

Coach Jean LaClair said: “Kiera is a workhorse, both in sports and in life. This shows not only in academics, but in her successes both on and off the court. Anyone would tell you that she is a tremendous person, who goes about her business, not arguing calls, not complaining about anything –   just going out and getting the job done. She has the ability to read the game very well, always putting herself in the best position to make the play. She makes what most would consider a spectacular dig look easy because she puts herself in the right position. She is willing to cover more of the court when a teammate is struggling, and has the confidence in her game to do this. Kiera has been the libero on three state championship teams – she runs the back row, and has since her freshman season. Kiera will be missed when she moves on to play in college, but she is doing a great job training our younger players on the work ethic and attitudes needed to keep this program moving forward.”

Performance Point: “Just to be able to play a Class A team and perform well against them is just a win in itself,” Lasky said of the Lakeview match. “We just played really, really well, and we were smart, and it was just exciting to see because we’re not to our full potential yet and it was really cool to see how well we could play when it’s all put together. … Everything we do revolves around our block. So our blockers, our front row, played extremely well. Our middle senior Ashton (Wronikowski) really took control up there and made sure she was closing the block, which makes it a lot easier on the back row because the block takes away a certain part of the court. We could all get in our positions and just dig the ball and do what we’re supposed to do. And we have a lot of hustle plays, and the effort was definitely there. So we just did our job and dug the ball.”

In the running: “I honestly didn’t think I was going to be on (the Miss Volleyball finalist list), so when I found out I was excited. I was like, ‘Oh man, this is an honor.’ But in all honesty, it’s not just my award, it’s the team award because I’d never be able to be where I am without our team. I wouldn’t be half the player I am today without my team and without my coach. At Bronson, we’re all about team chemistry and 100-100 – going 100 percent 100 percent of the time. We know what we’re supposed to do, when we’re supposed to do it, and we hold each other accountable.”

Back row driver: “When I was younger, I was dead set that I was going to be an outside (hitter). I guess my growth just got stunted, so I ended up 5-5, and that’s where I got put. … Being a libero, you don’t get all of the limelight, you don’t get all of the fame. But I think it’s extremely important. It’s kinda like being a quarterback on the football field. You’re telling people what to do, where to go. They just look to you when they don’t know. Especially on my team, I take a leadership role, and so I find it extremely important where other people might not. It’s a role, that if there wasn’t one, I don’t think a team would be as successful.” 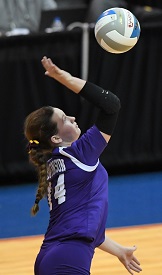 Play like a champion: “What I take away most from (winning three titles) is just from year to year, as I’ve gotten older, we tend to do a lot of the same things. We have these traditions before every game. We go, we’ll stretch, we’ll sit in a circle, we’ll discuss the scouting reports because we do scouting reports whenever we watch film – so we watch film about every single team that we play. That’s a big part about why we’ve won, because we know our opponents – we almost know what they’re going to do before they do it. We know them because Coach’s husband Duane goes and he scouts every single team for Districts and Regionals, so we’re thankful to have him around and for doing things that other teams don’t really get the opportunity to do. That’s a big part, and just taking away from the state championships, people kinda look at you in a different way. They’re like, ‘Oh man, they’re state champs.’ So you’ve really just got to set the tone and be the example, like at school; people look up to you. You always try to do the right thing. Coach always says, if there’s a piece of paper in the hallway, bend down and pick it up. Show people what they’re supposed to do.”

One big Bronson family: “I’m kinda related to half of the town. Last year my cousin Kiana (Mayer) was the setter. My sister Adyson (Lasky), who was a captain, she played outside and she was a really big role on our team. My younger sister Meagan, she’s actually the setter now on this team. The right side is also my cousin, Jolie (Smoker). There’s another DS (defensive specialist) on the team, Scyler (Cary), she’s my cousin too. (Cousin Alanna Mayer also is a returning hitter.) So there’s been a lot of relatives on the same team. It was a little frustrating sometimes, because there were three of us that were sisters and we’d kinda get in little arguments. But it would be over and done with – (and) it’s been a lot of fun making memories. My other two cousins, Kylei Ratkowski played on the 2009 state championship team and Alexa (Ratkowski) who sets at Trine, she was the setter my freshman year. So there’s been a lot of us who went through the program, and there’s more coming up.”