GAYLORD — After the first three weeks of the football season, it didn’t look like anyone was going to be able to stop Gaylord St. Mary.

The Snowbirds, after all, had scored 215 points over three convincing victories during their first season since making the move to compete as an 8-player team.

But that high-powered, explosive offense was ground to a halt over the last two weeks. It wasn’t because of a sudden lack of execution by St. Mary. Nor was it due to a stout defense rising to the occasion. Rather, it was back-to-back forfeits by opponents who weren’t able to field teams that sidelined the Snowbirds’ dynamic attack with an unwanted midseason break.

“Our kids want to play, but unfortunately it is what it is,” said Gaylord St. Mary head coach Kevin O’Connell. “It stunk for the kids because I know they really wanted to look forward to Friday nights, especially homecoming.”

St. Mary tried to turn the two-week pause into a positive. They hit the reset button and went back to focusing on fundamentals, with short periods of live contact during quick, but effective practices.

“Our practices have been nothing short of awesome,” said O’Connell.

St. Mary will find out this week against Suttons Bay if the time off disrupted its offensive flow. But the players are confident the break was not a hinderance.

“I don’t think it broke our rhythm. I think it brought us closer together,” said quarterback Brady Hunter. “We were able to bang heads with each other, get some frustration out.”

Hunter is one of a multitude of weapons the Snowbirds have in their veer option attack. The senior quarterback is joined by a stable of talented running backs in seniors Steven Koscielniak and Logan Murrell, and juniors Christopher Koscielniak and Dominic Keister. Senior center Rory Curran anchors the offensive line.

“I like this offense,” said Steven Koscielniak. “This is what our team is about, quick and fast.”

While the Snowbirds’ scoreboard numbers are eye-popping, the team’s individual stats are more modest – partly because those main threats didn’t play in second halves of two games St. Mary was thoroughly dominating. Also, there is enough talent on board to share the wealth and not miss a beat.

“It’s everybody. There’s not just one player who runs it. It’s the whole team,” said Steven Koscielniak. 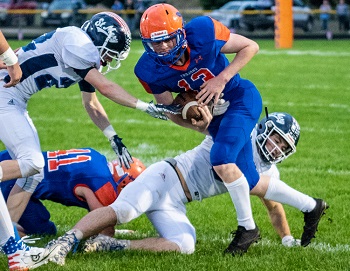 As the quarterback, however, Hunter is thrust into the important role of leading the group, a task he does well. The three-sport standout, who also excels at basketball and baseball, fittingly, has his pilot’s license.

“He’s one of the best leaders,” Steven Koscielniak said. “No doubt about it. He pushes us to the next level. He pushes us in practice, when we’re lifting.”

“He conducts himself the right way in everything,” O’Connell said of his signal caller. “He conducts practices. He speaks respectfully. He’s a great leader.”

Each of St. Mary’s skill players are returning starters, but it’s been a completely different experience this season for the Snowbirds, who were depleted by injuries and suffered through a 2-7 grind a season ago.

“We took our lumps,” said O’Connell, in his seventh year in charge of the Snowbirds. “A lot of that had to do with we were senior-laden the year prior and then a lot of the seniors last year didn’t get quality reps the year prior. High school football is extremely cyclical.”

Still, St. Mary had a good outlook for 2019. It had speed, athleticism, leadership and experience all on its side, plus a better fit as an 8-player team for a school its size.

“We definitely saw it coming,” said Hunter. “Last year we had a little bit of a rough season. Coming into 8-man we had all of our skill players returning. We knew this offensive power was here.”

The offense has been so impressive that it overshadows what the defense can do, but St. Mary is tough on that side of the ball as well. The Snowbirds’ depth allows them to have only a few players who play on both sides of the ball. Kyle Murphy and Chris Grody are disruptive on the defensive line, while Murrell leads the defensive backfield and Christopher Koscielniak – who his coach lauds for his toughness – is an all-state caliber linebacker.

“He’s not physically imposing, but he is so tough,” said O’Connell. “He’s disciplined. He’s good.

“We’re not big in stature. We just have a lot of tough kids.”

The astonishing thing is the Snowbirds have only started to tap their potential on offense. The team hasn’t even utilized some of its capabilities yet.

“We like to spread ourselves so we’re very diverse. If a team comes and stops our run, we’ve got a great spread offense, a great wing set and a lot of stuff we can throw at them,” said Hunter.

The time to introduce some of that could be coming as the schedule ramps up considerably when St. Mary finally steps back onto the field. The matchup at Suttons Bay is a showdown between unbeaten teams and is followed by contests against a pair of current 4-1 teams in Vestaburg and Mio — the latter a rematch from a 48-32 Week 2 game — and 3-2 Brethren.

“It’s definitely going to be fun,” said Hunter. “Those blowout games aren’t really fun for anyone. Suttons Bay’s a great team. Mio, (Vestaburg and Brethren) — they’re all great teams. It’s going to be a good battle towards the end of the season, and it’s really going to prepare us for playoffs.”

PHOTOS: (Top) Gaylord St. Mary’s Logan Murrell (7) follows Steven Koscielniak (1) and another blocker around the edge during a Week 3 win over Central Lake. (Middle) The Snowbirds bring down the Trojans' T.J. Schultz. (Photos by Sports in Motion.)