The 5-foot-8 senior guard scored a school-record 41 points during a 58-39 win over Marcellus on Jan. 7, breaking her previous single-game school record of 38 points scored as a sophomore to earn the MHSAA “Performance of the Week.” West also became her school’s all-time leading scorer Dec. 17 against Bangor, breaking her coach Brooke McClure’s career points record of 1,224, and West is since up to 1,308 after eight games this winter.

For the season, West is averaging 21.3 points, 8.3 rebounds, 4.4 steals, 2.9 assists and a blocked shot per game. She has led White Pigeon to a 6-3 start after the Chiefs finished 8-13 in 2018-19 – after which West was named to The Associated Press’ Division 3 all-state team. She was an all-region selection as an outside and middle hitter in volleyball this fall, and a league, county and Regional champion as a track sprinter last spring. She also ran cross country during her sophomore year, when she was featured on Second Half for her multi-sport success. West will continue to play basketball after high school for Taylor (Ind.) University, which made the NAIA Division II national quarterfinals a year ago.

West fills her time outside athletics as well. She carries a 4.0 grade-point average and is tied for first academically in her graduating class – and will bring 32 college credits with her to Taylor. She also serves as her White Pigeon class president. West plans to study kinesiology at Taylor, in preparation for becoming a physical therapist.

Coach Brooke McClure said: “I have had the honor of coaching Claycee since she was a freshman. She has had a huge impact on our basketball program and not only that, but on me as a coach. Her work ethic and desire to become a better ball player has also inspired me to put more work into the game and become a better coach for her and her teammates. In small schools like White Pigeon, it is rare to have an athlete as dedicated and as hard-working, along with (having) tremendous athletic ability, to play for our school. She is so smooth and makes the game fun to watch.  Sometimes she still surprises me when she does a certain move or makes a difficult shot. … She is such a good example on how to be a great leader. Even when things haven't gone her way, she has adapted and overcome any adversities she has encountered. We are truly lucky to have her be a part of our basketball program and our community, and I am so proud of the young lady she has become.”

Performance Point: “In the third quarter, I just shot the 3 a ton, and I couldn't miss,” West said of her 41-point performance. “I was just on target that game. It was close the whole time, so it didn't really feel like I was doing that much. I didn't notice I had that many until I hit 39 at the end of the third quarter. ... Coming in freshman year even, this was my goal, to break the (career scoring) record. I had a solid sophomore year, and then junior year too, so I knew coming into my senior year that it was going to happen. And so I wasn't really stressing about it, because the chances of it not happening were almost at zero. So this year I'm more focused on getting the team better, getting the team ready for when I leave. I've had a couple of big games this season, but that wasn't the focus. Just to break these records and be leading my team at the same time, that's the best thing ever ... to be able to accomplish my goals and accomplish team goals at the same time.” 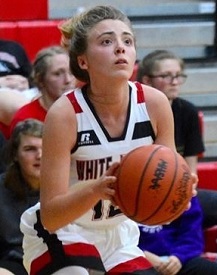 ‘When I leave,’ what I hope to leave: “I want (my teammates) to take the game into their own hands. For a while, they didn't know how to do that. They're so young, and someone's gotta step up and lead. I have a pretty competitive nature, and I want that to stir in them that they can accomplish anything that they set their minds to. Because they're an athletic group; they can play ball, but someone's gotta be leading that. And that's what I'm trying to instill. ... I'm a pretty vocal leader. When I see something, I say it. When it's time to be intense in practice, I let them know that's the time to be (their) best. In sprints, I'm trying to be the first one, and (I'm) coaching everyone to do their best. And just really being intense on the court, during games, during practice, building myself and others to our fullest potential. I think this year, it's starting to click.”

Play them all: “I think it's just the fact that (playing multiple sports) keeps me from getting burnt out on a single sport, and playing volleyball makes me better at basketball, and basketball does the same (for volleyball) in different aspects. It makes me all-around such a better athlete and just makes me compete at a higher level, I think. ... I'm very sad that these next four years I won't be playing volleyball. Track's a little different – it's not my favorite thing. But if I could, I'd play both (basketball and volleyball).”

I love to compete: “I love to win. Just to compete ... I've been raised all my life to be competitive. I get it from my mom. She's a very competitive person. She's instilled it just throughout life. I strive to be the best in anything I can be in at all, whether that be in school, in sports or life in general. My mom really pushes me to be that person. She's my volleyball coach now, and at a young age she was my coach too. I don't know if it was just her doing that or her interaction with me. She just holds me to a high standard and doesn't let me slack, and I appreciate that. She's always been a big part of volleyball and basketball for me; both of my parents have. … Not being able to play volleyball (in college) will be hard. But not being able to play with her is going to be even harder.”

President West: “I started off doing student council in middle school. And just leading – I love to lead. I love to make sure everything is done right. … It keeps me busy. It keeps me doing something active. I get to learn everybody's names. I get to know everyone, be part of everyone's life. I just really like to be that influencer, I guess.”