PORTAGE — One high school match continues to stick out for Kathleen Hawkins. She played it not as a senior, but as a sophomore, and not to win one of her three MHSAA Finals championships for Kalamazoo Hackett Catholic Central, but just to get a chance to claim the first.

“(The semi) felt like a final,” Hawkins said recently, a big smile on her face as she remembered. “It

was crazy. It was a great match. Both teams were cheering super loud.

“It was intense but so much fun. Then Rachel Denny and I became teammates at Western (Michigan University), which is the funny part.”

Hawkins said she will never forget the excitement.

“I think that was the most anticipated match of the weekend,” she said. “It was awesome.

“I haven’t played very many matches where there was so much going on and so many people cheering. It was great.”

Two years later, and now a decade ago, Hawkins graduated from Hackett with two more championships and the Michigan Miss Tennis title.

These days, Hawkins is back where her tennis career started: the YMCA of Greater Kalamazoo, where she teaches aspiring young players hoping to follow in her footsteps.

She began lessons at age 9, working with Maurice Palmer for nine years at the Maple Street Y, before she headed off to college. 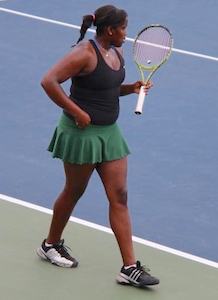 Three years ago, she returned to the Y as the junior tennis coordinator at the Portage branch, working with youth ages 3 to 18.

Returning as a coach was a no-brainer for the personable Hawkins.

“Kat went through the YMCA of Greater Kalamazoo tennis program as a youth player, excelling herself to the top collegiate level,” said Erik Anderson, Association Tennis Director. “She is a direct representation of achievement and success for youth tennis players.”

He added that Hawkins has developed into an elite adult player that people look up and want to learn from.

“There is a spot for everyone at any age and any level of tennis in our programs, and Kat finds the right spot for our youth to get in the sport, enjoy the sport, and excel at the sport,” he said.

One of those students is Ellie Skwiat, a rising junior on Hackett Catholic Prep’s tennis team. (The school changed its name in 2014.)

“She’s amazing,” Skwiat said of Hawkins. “She’s my hero coach, and I’ve only been hitting with her for a year.

“She helps me stay consistent and focus on the game more mentally instead of physically.”

Hawkins said she has incorporated the lessons she learned from Palmer while working with today’s young athletes. 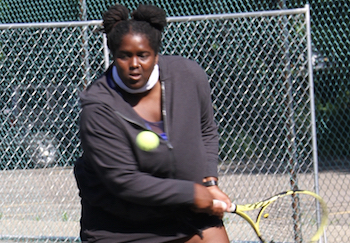 “He was somebody who pushed me to be the very best, not just on the tennis court, but off the court, too. I think that’s super important.”

She said she hopes to instill those same values in her students.

“Confidence in every aspect of their lives,” she said. “I’m not just a tennis coach, I’m a life coach.”

Although 10 years have passed since her high school years, she remembers it all and keeps in touch with those teammates.

“I’m one of those types of people that really remember fierce competition,” she said. “I remember states every year. It was an exciting time of my life, probably the peak of my tennis career.”

Earning the Michigan Miss Tennis Award was the perfect end to her high school career.

“I don’t think I found out I got that award until July 8, my birthday. It was the best birthday present I think I ever received. It still holds a place in my heart.”

Making the transition from high school to college was an eye-opener, she said.

“When I was in high school, I was kinda starting to hit the peak of my game at the end of my career,” she said. “I didn’t even know there was so much further I could go.

While at WMU, Hawkins had an Intercollegiate Tennis Association ranking of 55, making her the first Bronco to break into the top 60.

After graduating with a degree in recreation and minor in business, Hawkins left tennis for a job in marketing with Wyndham Vacation Rentals in Colorado, but returned to Michigan in 2016.

The current pandemic put a stop to her coaching for three months, but not her interaction with the community.

“As a department in Portage, under the whole Y umbrella, the tennis department and the aquatics department teamed up to help deliver meals to low-income communities,” Hawkins said.

“It was nice to do in the midst of all this happening to think about other people. It felt good to do; it felt right.”

As for the future: “I haven’t thought that far,” she said. “Honestly, I just had a child so my ultimate goal is to be a great mom and to catch up on my sleep.

“I’m looking forward to continuing here at the Y.”

Hawkins married Evan Olsen, her high school sweetheart, and they have an 11-month-old son, Hendrix.

As far as her son playing tennis, “I hope so,” she said.