So when the opportunity arose to reconnect with the high school basketball scene, the former Mr. Basketball and Michigan State standout didn’t think twice.

Neitzel, 35, has spent the past five years as a high school basketball radio analyst alongside longtime broadcaster Bret Bakita.

“It was a natural fit for me coming back to Grand Rapids, and I’ve known Bret since he was broadcasting my games at Wyoming Park,” Neitzel said. “He was looking for a partner and reached out to me.

“I didn’t have the time or desire to maybe get involved with coaching locally, so the high school broadcasting was the perfect fit to keep me around the game and feed my appetite for the game. Friday night hoops is one of the best atmospheres with the student sections and great crowds, and there’s a great following in West Michigan. It’s great to be a part of that high school action again.”

Bakita has been a staple in the West Michigan sports scene and has been a mentor to Neitzel.

“Bret is a true professional and a great guy to work with and learn from,” Neitzel said. “It’s been a great fit and a great team, and hopefully we have a season this winter.”

Neitzel and Bakita were broadcasting a boys District Semifinal in Holland the night before the Covid-19 pandemic started affecting the landscape of sports.

NCAA conference tournaments were canceled, and soon after March Madness and the remainder of the high school winter and spring seasons as well.

Netizel currently lives in Grand Rapids with wife, Kristi, and their son, Drake, who turns 1 in August.

The recent pandemic has changed the lives of many around the world, but Neitzel has tried to take everything in stride.

“It’s certainly been different, and my wife and I are both working from home, which has been good since we have a 1-year-old,”  said Neitzel, who works as a financial advisor in Grand Rapids.

“We try to see the positives with everything going on and the craziness in the world, and working from home allows us to spend extra time with our little guy.

“It presents its own challenges, but overall we’re doing well and we’re trying to be smart and responsible by social distancing and staying outside. Not putting ourselves in harm’s way if we don’t have to.”

The pandemic and enforced precautions has put a damper on summer activities, which included Neitzel’s annual basketball camp. 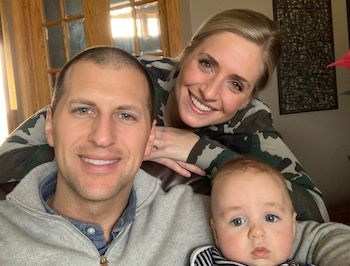 The popular Drew Neitzel Basketball Camp has been running for more than a decade, but likely will be halted due to the pandemic.

“This would’ve been our 12th year, and it has been very successful and continued to grow,” Neitzel said. “It’s the one week in the year that I get to get back in the gym with the kids and my dad and 15 of my good buddies who help coach.

“It’s disappointing that we haven’t had the chance to run the camp, and we haven’t officially canceled it, but it looks more like that’s going to be the outcome with everything going on and the gyms not being allowed to open.”

His stellar high school career at Wyoming Park included becoming the school’s all-time leader in points and assists, while winning the Mr. Basketball Award and taking his team to the Class B Semifinals as a senior in 2004. In one of the most memorable games in MHSAA Tournament history – and before a capacity crowd at the Breslin Center – Neitzel scored 36 points but saw his team fall 79-63 to a Detroit Renaissance eventual champion that included major Division I college prospects Malik Hairston, Joseph Crawford and Tajuan Porter.

Quickly, Neitzel made an impact in East Lansing as well. He was a starting point guard for a majority of his time as a Spartan, and helped Michigan State reach the Final Four as a freshman.

“I couldn’t have written a better college career,” Neitzel said. “You wish you would’ve won more games and went to more Final Fours, but when I look back, to step in and start halfway through my freshman year for Coach Izzo and for him to give me the reins with a senior-heavy team was a great experience.

“That 12 months of my life was absolutely crazy. My senior year of high school going to the Breslin Center, winning Mr. Basketball and then earning a starting spot and going to the Final Four was a wild ride. It was an awesome year for me, personally.”

After not being selected in the 2008 NBA Draft, Neitzel played professionally in Germany and France for five years while also being invited to NBA summer leagues and training camps with Minnesota, Portland and Dallas.

His last taste of the NBA came in 2011 during training camp with the Mavericks. He was eventually cut, and finished the season in the G League.

“That was a great experience,” Neitzel said. “They were a first-class organization and Mark Cuban and Rick Carlise were great. It was the year after they beat Miami in the NBA Finals so they were still on cloud nine from the championship.

“The guys in that locker room were Jason Kidd, Jason Terry, Dirk Nowitzki, Vince Carter, Delonte West, Shawn Marion and Lamar Odom. I was a fly on the wall, and to be around those NBA greats and veterans was definitely one of the highlights of my career.”