NOVI – The frightening thing about East Grand Rapids’ girls lacrosse roster this season is there was just one senior.

It was an opportunity last year’s seniors didn’t receive due to COVID-19 forcing a canceled season, and that wasn’t lost on their former teammates who came back this spring.

“It was really tough last year; we had so many seniors that we loved so much and were excited about playing with,’’ said junior Lucy Cavanaugh, who had six assists and scored four goals for EGR. “This year we wanted to come in strong. We only have one senior this year. Some of these juniors had never played on varsity. We worked so hard this year, and we practiced so much.’’

Junior Lizzie Lundeen, who had scored 102 goals heading into this week, added five more in the finale.

“The only goals that were important were the ones scored in this game,’’ she said. “We practiced all the time. Eliana (LaMange) played great. She had that goal just before half, (that) was amazing. We felt a lot stronger with that goal.

“This was surreal because we’ve had a long, strung-out season because of COVID. We didn’t want to take it for granted.’’ 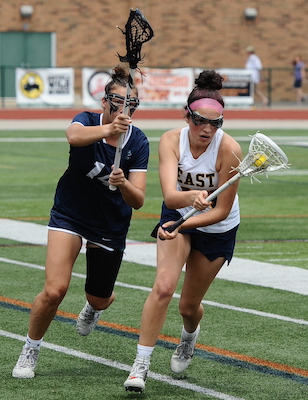 Regulars in the Division 2 Final, East Grand Rapids previously had won six titles while Cranbrook (13-7) had captured championships in 2017 and 2018.

East Grand Rapids (23-2) wasted no time scoring as Lundeen netted her first 40 seconds into the fray for a 1-0 lead.

Cavanaugh tacked on the Pioneers’ second goal for a 2-0 lead as play stayed in the Cranbrook end.

Cranbrook finally got out of its end and scored on a goal by junior Riya Batra to cut the deficit in half. The Cranes then tied it 2-2 on a goal by Lilli Sherman.

Lundeen scored her second goal of the game for a 3-2 lead with Cavanaugh getting her second assist.

Lola Norton tied the game at 3 for Cranbrook at the 15:13 mark, and the Cranes took their first lead on a goal by Eryn McLaughlin with 12:33 left in the first half.

Mallory Brophy scored for the Cranes to make it 7-5. Oliva DeMuth got the Cranes’ to within one goal with a score with 2:37 left in the first half.

Lundeen scored her fourth goal of the half to give the Pioneers an 8-6 lead and tacked on her fifth to put the Pioneers three up. LaMange scored her third just before the buzzer to put EGR up 10-6.

Cavanaugh scored her third to start the second half as East Grand Rapids opened up an 11-6 lead.

The teams traded goals with LaMange scoring her fourth of the game to make it 12-7. Cavanaugh responded with her fourth to increase the lead to 13-7.

EGR started pouring it on as LaMange scored her fifth to make it 14-7.

Consecutive goals by Brophy and Ella Lantigua cut the East Grand Rapids lead to 15-10 with 8:26 left in the game.

After an EGR timeout, the Pioneers went into a four corners offense, draining two minutes off the clock.

“They are a class act,’’ said Cranbrook coach Jeanne Woodbury. “We didn’t play as well as we liked, but we’re a young team and we have a chance to get back.’’