How last season ended can affect how next season begins – and among trends this season are a number of girls basketball programs picking up again after strong finishes last winter.

That’s also a theme among headliners in our Breslin Bound report this week, as we cruise into a holiday break that will slow things down for some – but still include a number of notable matchups, as we’ve also covered below.

“Breslin Bound” is powered by MI Student Aid and based on results and schedules posted for each school at MHSAA.com.

1. Detroit Edison 67, Hudsonville 48 The Pioneers (3-1) continued another great start with a big win over the reigning Division 1 champion Eagles (3-2) at the West Michigan Spotlight.

3. Portland St. Patrick 53, Fowler 49 Two of the state’s best in Division 4 are neighbors, and the Shamrocks improved to 6-0 by handing reigning Finals champion Fowler (5-1) its first defeat; they meet against Feb. 1.

4. Hudsonville 59, Byron Center 56 (OT) While the Eagles’ losses have come to statewide contenders Edison and Midland Dow, they’ve stacked some wins closer to home with Byron Center (2-2) coming off a league title.

5. Sault Ste. Marie 51, St. Ignace 29 Reigning Straits Area Conference champion Sault Ste. Marie (5-3) earned a key win in what could be a three or four-team (out of five) race this winter, with the Saints (3-1) always a factor.

Haslett (6-0) The Vikings are building on a 14-3 finish from last winter that included two losses to East Lansing, including the season-ender in the District Final. They avenged those with a 43-42 win last week, with their only other single-digit victory so far a noteworthy 41-38 edging of Jackson Northwest in the opener.

Utica (6-0) The Chieftains followed two straight 15-win seasons by finishing 6-10 last winter, but closed with a District title. They’ve rolled right into this winter with four wins by 28 points or more, but also two by just a bucket that have been the most impressive – handing the only losses to Port Huron (42-40), and last week, Macomb Dakota (48-45).

Otsego (6-0) Despite last winter’s abbreviated schedule, Otsego did improve a win to 9-6 and has continued to rise this winter. A 53-47 victory over Portage Central on Dec. 7 remains Central’s lone defeat, and the Bulldogs have a chance to close the calendar year with another nice statement when they host Marshall on Dec. 30.

Saginaw Swan Valley (5-1) The Vikings won five of their last six games to close 2020-21 at 10-7, their first winning season over the last three, and they’ve also carried some momentum into December. The lone loss was to still-unbeaten Lansing Catholic, and Swan Valley dealt the only defeats to Reese and Essexville Garber by matching 54-43 scores.

Carson City-Crystal (4-0) Last season’s 8-10 finish included a pair of losses to Mid-State Activities Conference rival Mount Pleasant Sacred Heart, and the highlight of this start has no doubt been the 37-32 win over the Irish last week. All three of the Eagles’ other victories were by 16 points or more. The first matchup with reigning MSAC champion St. Charles is Jan. 21.

Hancock (5-1) Hancock’s only loss came to undefeated Calumet last week as it builds on last winter’s 11-5 finish. The Bulldogs’ highest win total over the last five seasons has been 13 wins, and they should make a run at surpassing that after also handing Ewen-Trout Creek its lone defeat and avenging last season’s District loss (and also a two-point regular-season defeat) to Negaunee.

Baraga (6-0) The Vikings are perhaps the Upper Peninsula’s strongest program that remains a bit under the statewide radar, but they’ve won league and at least District championships the last three seasons and show no signs of slowing down. After opening with a five-point win over Ontonagon, Baraga has won its last five games by an average of 33 points per contest.

Lake Leelanau St. Mary (4-0) Edging a Rudyard team 47-45 on Saturday that could contend in the Straits Area Conference was an attention-grabber for the Eagles, who won five of their last six last season to finish 9-7. Games this week against Saginaw Valley Lutheran and then at Carlton Airport’s showcase to end December will provide opportunities to make noise as well. 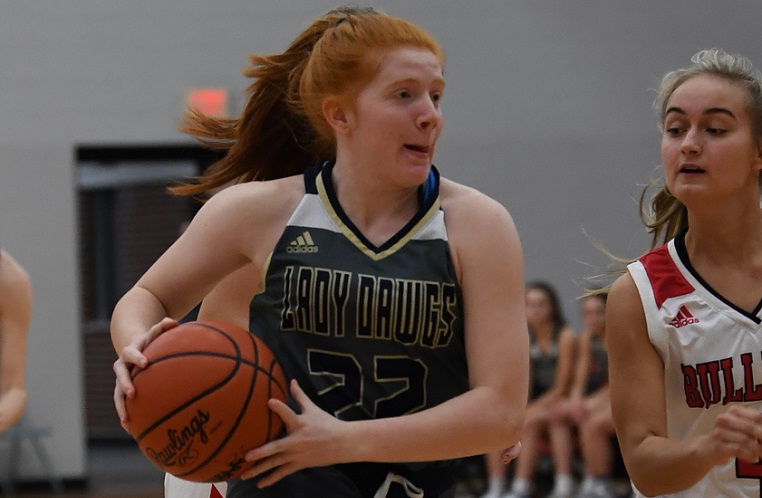 Dec. 29 – Frankenmuth (4-0) vs. Ypsilanti Arbor Prep (4-0) at Redford Westfield Prep – This may be the premier game of the Motor City Roundball Classic, matching contenders in Divisions 2 and 3, respectively.

Dec. 29 – St. Ignace (3-1) vs. Port Huron (3-1) at Redford Westfield Prep – This is another of the most intriguing Motor City Roundball Classic matchups.

Dec. 30 – Marshall (3-1) at Otsego (6-0) – As noted above, this pairs two Division 2 teams that appear on the rise, with Marshall’s only loss by three opening night to Division 1 Battle Creek Lakeview.

PHOTOS (Top) Davison evened its record last week with a 55-40 win over Saginaw Arthur Hill. (Middle) Otsego moved to a 6-0 with a 72-46 win over Vicksburg. (Photos by Terry Lyons and Gary Shook, respectively.)