MIDDLEVILLE – Thornapple-Kellogg senior Anna Benedict remembers competing in Rocket Cheer when she was in elementary school and looking up to the varsity cheerleaders who were there helping her.

Those same girls made it to the MHSAA Finals in competitive cheer, and Benedict aspired one day to reach the same level as her role models.

“I was coached by those girls, and as a little girl that was my dream,” Benedict said. “I wanted to go to the state finals when I was in the cheer program, and it would be so awesome to be back there.”

The Trojans haven’t appeared in the Finals since 2015, when they placed fifth in Division 2, but they are currently in the process of changing that.

A successful start to this season has created a belief that a return to the Finals is within reach.

“There is so much motivation,” T-K senior Zoey Thomas said. “We practice in the big gym and we have all our banners with the different sports, and that is one of our biggest motivations.

“Our coach will point up at the banners and will talk about adding years to conference, Districts, Regionals and state.”

Thomas, a three-sport athlete like many on the team, wants to end her time at the school competing with the best in the state.

“We haven’t been there since 2015, and personally, one of my goals is to end my high school career by going to state in one of my three sports,” Thomas said. “It would be so cool to go for competitive cheer my senior year.”

While the Finals are still more than six weeks away, the Trojans are on an upward trajectory.

The Trojans also won their own invitational last weekend by producing season-high scores in every round.

Prior to that, they captured victories at the West Catholic Invitational and Blue Devil Invitational. 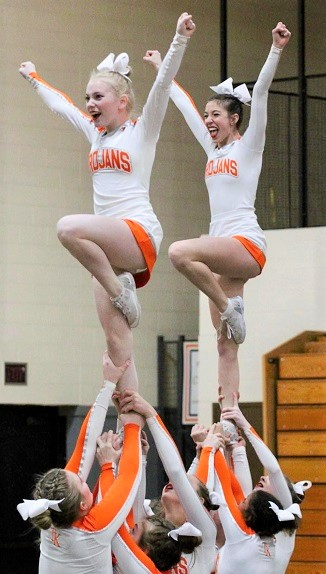 “We’ve had a strong start for sure, and we are just trying to keep the momentum moving throughout the season and into Districts, hopefully Regionals and even going for the state finals,” T-K coach Adrian Sinkler said. “The biggest thing I keep telling them is to be consistent and just go out and have fun. We have to have stronger performances every time, and so far they’ve definitely done that.”

“We are not a school that goes to the state finals every year,” Benedict said. “So it would be cool to show that we can do it. Our season has played out well so far, and we all want it so bad. This team is willing to try anything to try and do it.”

The Trojans currently have the fourth-highest score (719.9) in Division 2, but they are not settling.

“We’ve had good success so far, but we have to continue to put in the work and not get comfortable,” Benedict said. “We have to understand that nothing will be given. Every competition is different, and you can’t predict anything. We can’t stop working hard and we just have to better ourselves.”

Added Thomas: “It took a lot of work to get to this point, and it’s not something that has come easy. It’s been hours upon hours of just cleaning, fixing and changing things. It’s been grueling work, but absolutely worth it, and it’s paid off so far. We're not done yet.”

Sinkler has an invested interest in the program as an alumnus.

She was a member of the first Trojans team to qualify for the Finals in 2012.

“It’s been a while since we’ve been there, and we’re trying to get them to go back,” Sinkler said. “They mesh really well and get along while also keeping each other in check, respectfully.

“They are different kids, and they are very calm, collected and very coachable. That keeps them pushing for something bigger. We have a big senior class and this is their last shot, so they want to leave a legacy and leave their seeds of knowledge back to the underclassmen.”

T-K has been solid in all three rounds, but especially its third.

A few tweaks have been made to improve the complexity and energy in that round, and it’s led to an enhanced confidence level.

“We made some changes a few weeks ago because we just weren’t loving the ending of it,” Sinkler said. “As a coach, it just didn’t do it for me and it didn’t give me that ‘wow,’ so we changed it. It’s definitely worked in our favor.”

Benedict said the third round has become the Trojans’ favorite.

“We’ve gotten better since the changes, and we’ve added a lot of difficulty,” she said. “As the round goes on, the stunts get more difficult, and that’s what makes it so good and so fun to watch.”

PHOTOS (Top) Middleville Thornapple-Kellogg celebrates its championship at its invitational Saturday. (Middle) The Trojans are seeking to reach their first MHSAA Finals in competitive cheer since 2015. (Photos courtesy of the T-K competitive cheer program.)