Jamie Miller is getting used to working alone.

As the lone diver on the Bay City John Glenn swimming & diving team, he spends his practice time by himself, working on the dives he hopes can get him a few steps higher on this year’s Finals podium.

“I’ve worked with plenty of really great coaches, and I’ve been to so many good camps,” Miller said. “I know a lot, and I actually know how to coach. I have a little TV, a little TiVo that records my dives, so 20 seconds later, I can walk up and watch it and see how to fix it. I’m a huge introvert, so I don’t have to talk to anyone and don’t have to worry about anyone.”

So far, so good for the senior, who is off to a strong start after finishing sixth at the Lower Peninsula Division 3 Finals a year ago.

He recently won the Tri-Cities championship at Saginaw Valley State, finishing with a two-day, 11-dive total of 454.5, which would have placed third at this past year’s Finals. He’s also broken the Oscoda pool record, scoring 273.55 for six dives to break the previous mark set in 1989.

“I think it’s going pretty well,” Miller said. “I had had a lot of time off because of COVID, but because of how hard I worked in middle school and my early years of high school, I just jumped right back in where I left off.”

Miller has been diving since seventh grade, although he discovered his skill and love for the sport almost by accident. 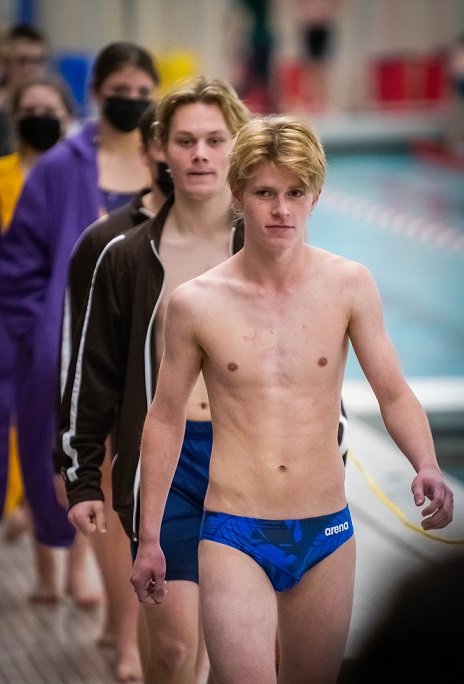 “I joined the swim team because it was the only sport I could pick that wasn’t a scary contact sport,” he said. “I started swimming and I got a really bad cramp and was like, ‘This kind of sucks. I’m going to try this other thing.’ Then I actually started to like it.”

He began working with Bay Aquatics Diving and coach Janet Beattie, which he said helped him to grow a lot as a diver. While the pandemic forced him away from the club, the lessons learned have helped him continue to improve.

He was also fortunate to have a strong teammate in Trevor Post, who placed fourth as a senior at the 2021 Finals.

“Trevor’s the kind of guy – you know the saying, ‘Work hard, because someone out there is working harder than you?’ Trevor was that guy, and I got to dive with him every day,” Miller said. “We got so competitive, and if we weren’t on the same team, we would not have been as successful as we were.”

Without Post pushing him daily at practice, Miller said it can sometimes be tough to be self-motivated. But anytime he needs a push, he looks up at the record board in front of him.

Miller is not only looking to motivate himself every day, he’s also constantly having to get over the fear that creeps in when he’s on the board and prepares to dive. While he considers the sport to be very fun, he’s not afraid to admit it is also “horrifying.”

“I have to get over it every single time I get in the water,” Miller said. “It’s kind of like diving is like a constant mental battle. It’s not a physical sport, it’s all mental. You have to convince yourself of things. You can really learn a lot about your mind with diving.”

As he learns about himself and how to stay motivated, Miller does have a greater goal ahead of him. Only three of the top eight divers from last year’s Division 3 Finals graduated, including two of the top five. Miller has crunched the numbers, and as he sees it, if all remains the same, he will move into the top three this year.

He’s not satisfied with that, though.

“I think the least I can shoot for is top three,” he said. “I should be shooting for first. I should just continue forward, shooting for first for the rest of the season. I know a couple kids who are really good. If nobody (else) just completely shines in their first year and beats me, then I should take third if everything stays the same. But I’m going to shoot for first.”