PLYMOUTH — Nick Galda would be the unquestioned No. 1 man in net for most high school hockey teams in Michigan.

So would Bobby Masters.

At Detroit Catholic Central, the senior goalies operate on a time share, alternating starts regardless of the importance of the upcoming game.

Last year, it was Masters whose turn came up when the Shamrocks played in the MHSAA Division 1 championship game.

On Saturday, the rotation worked out so Galda would start in the final game against Brighton.

Galda stopped 17 of 18 shots, as Catholic Central won its third straight MHSAA championship with a 5-1 victory over Brighton at USA Hockey Arena.

Of all the things Shamrocks coach Brandon Kaleniecki stresses about, goaltending isn’t one of them.

“From a coaching standpoint, I didn’t have to overthink at all,” he said. “I just had to say, ‘Hey, this is it.’ Both guys started early last year and we just kind of let them play one and one. We learned really quickly, hey, they’re both really good. I don’t need to get crazy, unless something weird happened where one of them got sick or got injured. That’s the only time we’ve changed the rotation for that.

“Outside of that, it was back and forth and let it go. When we talked about the Semifinals and Finals, the great part about it is neither one of them questioned it. They’re just, ‘OK, Coach.’ They knew the routine, and they were all in.” 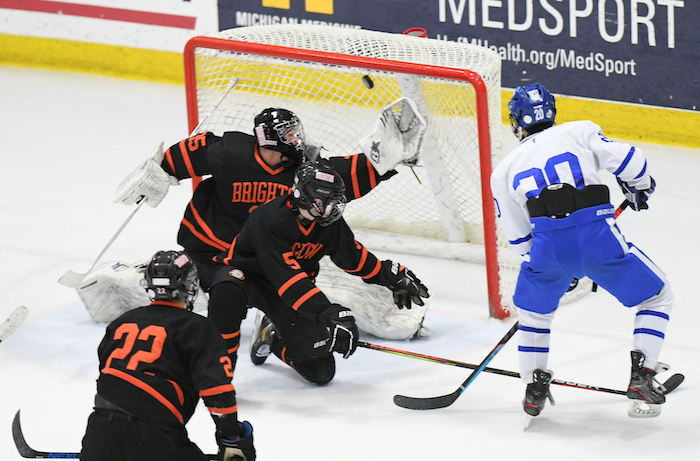 The two have a working relationship that is mutually beneficial.

“Me and Bob, all we want to do is win and do what’s best for the team,” Galda said. “At the end of the day, as long as we win, that’s all that matters.

“Bob pushes me every day to get better. So, I wouldn’t be where I am today without him at practice pushing me to keep going.”

It was the 16th MHSAA championship for the Shamrocks, but the feeling of winning remains fresh in the program. There are always players who won for the first time or who are ending their careers on the highest possible note.

“The seniors who win a state title and go out on top, it’s an unbelievable feeling for us as coaches to see them go out that way,” Kaleniecki said. “It means so much.”

Brighton opened the scoring on a goal by Cameron Duffany at 3:11 of the second period, but that only seemed to light a fire under the Shamrocks.

They stormed back, getting a goal from Parker Jamieson less than three minutes later. Brian Apple’s goal at 11:52 of the second put the Shamrocks ahead, 2-1, entering the third period.

Catholic Central broke it open with goals by Jack Swamba at 2:11, Justin Hubenschmidt at 4:44 and Landon West at 12:11.

Brighton came into the game with a 13-game winning streak since losing 2-1 to Division 2 champion Hartland on Jan. 15. The Bulldogs were playing in their first Final since winning back-to-back championships in 2017 and 2018.

“We left everything out there,” Brighton coach Kurt Kivisto said. “It’s not like we didn’t try. We competed. We blocked shots. We wore a lot of pucks. The effort was there. They were the better team tonight.”