KALAMAZOO — When Nick Verduzco learned his grandfather applied for the baseball head coaching job at Hackett Catholic Prep three years ago, he could not believe it.

When he found out his grandpa got the job, “I was pretty shocked,” the current junior said. “I didn’t really feel like it would happen.

“Once he applied, I was like ‘Wow, he’s actually going to do this.’ He called me right away when he got the job and I was like really emotional, overcome with joy because I knew it was going to be a lot of fun.”

While Smiley Verduzco’s first season leading the Irish was scrapped because of COVID-19, his second was a definite success. Hackett is the reigning Division 4 champ heading into the new season.

Fun and family are the themes running through the Irish baseball program. While Smiley Verduzco is the head coach, his son Steve is one of four volunteer assistants.

And the Verduzcos aren’t the only family filling the Hackett roster. Assistant coach Daniel Backman has two sons, Isaac and Eli, on the team. Catcher Brice Brown’s dad, Steve, is also a coach, and the fourth assistant is Adam Hall.

“I think the thing we found is in small schools like this, we’re pretty tightly knit in our group,” Steve Verduzco said. “We had 12 players on our team last year and will be similar this year. You get to know these kids so well, you learn to love them. They’re all my sons when we’re out there.”

The coaching position also gives Steve Verduzco a bit of leverage over his son. “I can sit him on the bench if he doesn’t make his bed,” he joked.

But all kidding aside, nepotism is not a thing, Brice Brown said.

“The kids don’t treat any of us differently,” he said. “We’re all family.”

The Verduzcos bring tons of experience to the team.

Smiley Verduzco, 78, a retired electrical engineer, has coached youth baseball teams since his son was young.

“He grew up in a poor area and got a football scholarship to go to college (University of Pacific),” Steve Verduzco said of his dad.

“This is who he is. He was captain of the football team, he was student body president, had injuries he played through, got a scholarship for his masters at Stanford, was CEO of companies for years out West.” 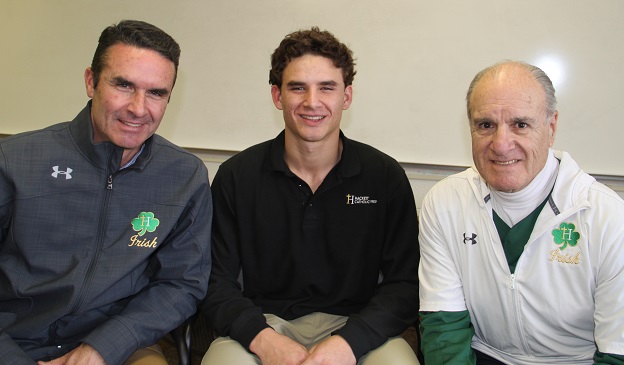 Steve added that it is that kind of leadership his dad brings to the team.

“He sets the tone in leadership for how we treat these kids, how we coach them, we encourage them, we love them, we challenge them,” Steve said.

Steve Verduzco played baseball at Notre Dame and was drafted by the Houston Astros in the fourth round of the 1993 amateur draft.

He played in their farm system for three years before leaving to raise a family.

At age 49, Steve Verduzco laughed: “I’m still young enough that I can throw batting practice and can run around a little bit. It’s getting less every year.”

Nick Verduzco said he is thankful for the opportunity to share the experience with both generations.

“To work with my dad and grandpa every day, especially having such a season like last year, and with all their baseball knowledge is great,” Nick said.

“They are also setting an example as a role model.”

However, the father-son coaching styles are not at all the same.

“My grandpa is more level-headed and calmer,” his grandson said. “He sets a really good tone, making sure we’re always keeping our faith and baseball intertwined.

“My dad does more the approach part of the game, coaches third base. He has a good feel as to what’s going on in game situations.”

Besides coaching, Smiley Verduzco is a spiritual leader of the team.

He borrows from the book “The Soul of a Team” by former NFL coach Tony Dungy.

“S is for selflessness,” Smiley Verduzco said. “O is for ownership; take ownership of what you do in school and on the field. U is for unity. We come together, and L is for the larger community.

“We play for the archdiocese, we play for Hackett, for all the teachers in school, all the students in school. We represent ourselves on the field for that community.”

He also said faith is an important component of the team.

“We pray before every practice and game, and afterwards,” he said. “It’s such a special place because there’s that element in faith and trust in Jesus that brings them together.”

Chips on the shoulder

Despite graduating four top players, the team is even more motivated this season.

“Last year, we were unranked in the preseason state rankings and ended up winning it all,” Nick Verduzco said. “This year, we’re ranked third in the state.

“It seems like we lost a lot, but we returned a lot, as well. No pressure, a lot of motivation, just fuel.” 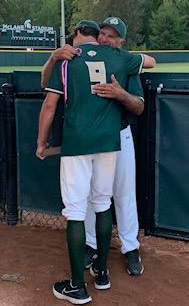 Brice Brown backed up that feeling.

“We always have a chip on our shoulder and this year is no different, even after winning states,” he said.

Practice began Monday and the coaches will get a look at the new team during its first game March 23.

“He’s one of the best two-way players in all of West Michigan, pitching and hitting,” Verduzco said. “He drove in almost 60 runs in spite of missing two weeks. He’s unbelievable. He’s a returning captain.

“Nick had a big year last year and will bat in the middle of the lineup.”

The junior Verduzco drove in 36 runs and posted a .421 slugging percentage.

The Backman brothers round out the preseason top four.

“Senior Isaac Backman had a tremendous year and will be running track this year as well and had a great second half last year,” Smiley Verduzco said. “His little brother Eli is tremendous. Hit .330 as a freshman playing second base and really came through in the playoffs in some really big moments, so that should give him tons of confidence.”

“We’ll count on some freshmen, too,” Verduzco said. “Small school. You’ve got to have freshmen.”

Nick Verduzco sums it up.

“I’m really appreciative of how much fun I have, not only with my dad and grandpa, but with all my teammates,” he said.

“The camaraderie we had, the state championship, all the lights, all the attention we were getting, was all cool. But at the end of the day, I’m just really grateful for the relationships I made, especially with my teammates.”