BLISSFIELD – The 2021 track & field season didn’t start the way Annabelle Smith had hoped, but it sure finished the way she wanted.

Smith opened the season by long jumping only 15 feet, 5 inches, well short of her best. She bounced back quickly and never lost in the event again, culminating with a Lower Peninsula Division 3 championship in the event.

“I think it was probably my worst day since middle school,” she said of last spring’s start.

Those days are long behind her. As she prepares for her senior season, she is confident, mentally strong, and physically ready to beat the early spring Michigan weather.

“It’s sort of hard for me because I much prefer warmer weather,” the Blissfield senior said. “Spring is my time to prepare. I try to give as much as I can.”

Michigan’s weather doesn’t do prep athletes any favors this time of the year. But, Smith said, it’s something you have to set aside and push through. It’s part of being mentally strong and focused.

“It’s something you can’t really control. You just have to deal with it.”

Smith picked up track & field in middle school. Her coaches had all of the athletes try every event to see what they were best at. She immediately took to the long jump. She qualified for the Finals as a freshman and tied for eighth place in the long jump but missed out on being named all-state due to a tiebreaker.

She trained hard for her sophomore year, only to have it canceled due to COVID-19. Last year she recovered from that early-season meet to win the Lenawee County championship, Lenawee County Athletic Association championship, Regional and Finals titles. She set a personal record at the LPD3 Finals meet with a jump of 18-1.5 and became Blissfield’s first female athlete to win a state track title in 30 years.

“What sets her apart is her competitiveness and ability to adapt in any situation,” said Calvin Sullins, a former decathlete at Siena Heights University who now coaches Smith at Blissfield. “She trusts our process and is an exceptional student of the sport.”

There was a time that Smith just went out, located her marks, and jumped. 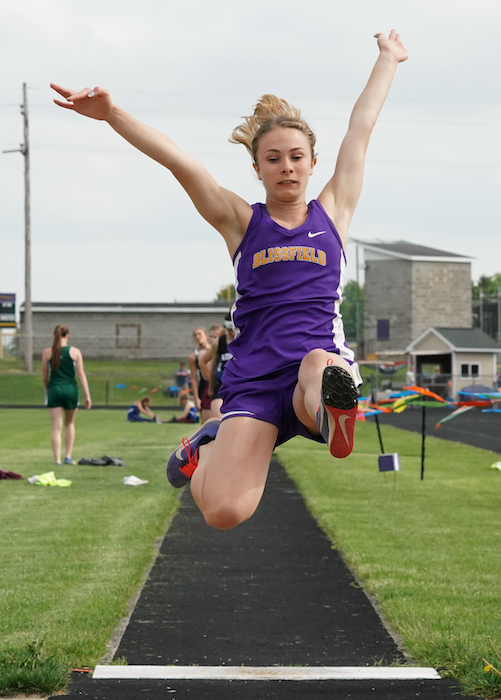 Sullins and the rest of the Royals coaching staff turned her head by concentrating on technique.

“Coach Sullins has a lot of knowledge about track in general,” she said. “It’s been great to work with him. Being a decathlete, he knows about every event.”

One of the techniques she learned was to count steps rather than just look for her mark when starting to sprint as she approaches the long jump platform.

She counts down in her head every time her left foot hits the ground.

“I jump when I’m at one,” she said. “I don’t have to worry where I’m at. It took a little bit to get used to, but it makes everything easier.”

She has scratched on occasion, but she trusts in her ability to take equal strides and count the 11 steps during her approach.

Being consistent in her events is her biggest challenge. She also takes pride in her mental approach to every event. There can be long breaks during a track meet, but she makes sure to get focused when she has to.

“Mentally, I’ve changed a lot,” she said. “For me, what works is to be very involved with the team and not spend my down time thinking about my event. When I start to warm up, I just envision what my jumps are going to look like. That’s my time to myself, my time to get focused.”

In between her junior and senior year of high school, she competed in a United States Track and Field Junior Olympic event in Atlanta, placing third in her division. She also had a national event in Florida. Closer to home, she entered some indoor meets in the open class in the area and trained whenever she found the opportunity to get out of the cold.

“I just tried to stay consistent all winter,” she said. “For me, technique is very important.”

Smith is looking at a few colleges, some nearby and some across the country. She’s undecided what she wants to do or where she wants to compete at the next level.

This year she intends to compete in the 100 or 200 meters and possibly some relays as well as the long jump. Her goal is to start stronger than last year and steadily improve as the season goes on and be at her best come the first weekend in June – when the MHSAA Finals take place.

“This year, my goal is to PR and get back to the state meet and place,” she said. “I have a lot of time to improve myself. That’s my main goal – to be better.”