At a time many coaches and school administrators seemingly come and go like billboard signs on the highway, there are a few who, over time, become part of the fabric of their school and community.

Diane Laffey is one such person.

Some perspective on how long Laffey has been coaching: President John F. Kennedy was still alive when Laffey was about to enter her second season as a head varsity basketball coach.

How many of you remember that sad day in November of 1963 in Dallas or did you simply read about Kennedy’s death years later? Laffey literally has been involved in high school activities for what amounts to a lifetime for many.

The word 'legend' is often misused when applied to an individual who has achieved greatness over a long period of time. But in Laffey's case, it fits her like a woolen mitten in mid-January.

Laffey, 83, started coaching girls basketball in 1962 at St. Anthony, on Detroit's near eastside. The following spring she began her first season as the head varsity softball coach. When St. Anthony merged with Detroit East Catholic and Detroit St. Elizabeth in 1969 to form one high school, East Catholic, Laffey remained for one season before taking over both programs at Harper Woods Regina, an all-girls school, in 1970. Dave Soules, the boys basketball coach at East Catholic at the time, tried to convince Laffey to stay, but to no avail.

With that move Laffey found a home, a home she would care for for years to come. On June 30, Laffey will officially retire from her position as the school's athletic director and as the head coach of the two varsity sports which have been so much a part of her life for seven decades.

When one coaches for 60 seasons, the number of victories, titles and championships can boggle the mind. Laffey has had more than her share of success winning seven MHSAA Finals softball titles, the latest coming in 2019, and reaching four Final Fours in basketball. And Laffey's teams always competed at the highest level, in the Detroit Catholic League Central, and in the MHSAA tournaments. Due to a decline in enrollment Regina moved from Division 1 to Division 2 in basketball two seasons ago. Laffey opted to remain in Division 1 in softball and will continue to compete at that level this spring.

As enticing as retirement might sound, making that important decision can be difficult. Change can be a challenge, especially to one who has dedicated herself with such passion and for such a long time in a profession where the reward is more often a pat on the back, a kind word or the return of former students who just want to say thanks.

There's a saying that needs repeating. It isn't work if you love what you're doing.

“It was hard,” Laffey said. “It's a very hard decision for me to make.”

It's not a stretch to say Laffey and the Catholic League have almost become synonymous over the years. And this relationship began well before her coaching career. Her father Jack 'Red' Laffey was the basketball and football coach at Detroit St. Charles and Detroit Nativity, where his daughter played basketball and softball before graduating in 1957. Her father died when Laffey was in the eighth grade, but she was around him long enough to know that coaching was in her blood.

“I was in the gym a lot,” Laffey said. “He was down to earth, but he could yell (at his players) when he had to. He cared about the kids. He was tough, but deep down he loved his kids.”

For those who know Diane Laffey, it's as if she was talking about herself when making that statement.

Her teams have been an extension of herself. They’ve worked hard. They’ve played the game with passion but without a bravado one might see in other teams that have achieved similar success.

After high school, Laffey received her undergraduate degree from the University of Detroit and then went to Wayne State University, where she earned her master’s in guidance and counseling. There was no question what she wanted to do with her life. It was just a question of where.

Most of her time was spent as a physical education teacher, but she did teach Spanish at St. Anthony and was a guidance counselor before becoming Regina's athletic director in 1977. Remember, Laffey coached two sports every season for 60 years. And if this wasn't enough, she coached softball at Wayne State from 1978-81 without taking time away from her duties at Regina – although she eventually left Wayne State because she said the time she spent coaching in college took time away from her responsibilities, her players, at Regina.

That doesn't mean her time at Wayne State didn't have it moments. There was one instance where the proper paperwork wasn't filled out in order for Wayne State to compete in a tournament. Faced with the problem of not having her team compete, Laffey met with former MHSAA Communications Director John Johnson, who was the sports information director at Western Michigan at the time, and Johnson came through by contacting a Detroit newspaper and obtained the paperwork needed for Wayne State to compete. Laffey said she was forever in debt to a person she would work with many times in the future.

Laffey has been the recipient of numerous awards – most notably her induction into the Michigan Sports Hall of Fame and the National Federation of State High School Associations’ Hall of Fame – yet those honors are not what she'll remember most when her career comes to a close. No, it'll be the same reason why she entered the profession of education – people, most notably her students and assistant coaches.

Her coaching staff this basketball season consisted of Emily Frikken and Kevin Reese. Kerri Kelly, Marisa Mugley, Mike Roeske and Frikken assist her in softball. Frikken and Mugley both played for Laffey.

Frikken played basketball and softball for four seasons before graduating in 2009. Frikken's perspective is quite unique in that she attended Regina the last two years the school was located in Harper Woods and was part of the transition when the school moved to Warren in 2007. A 2013 Albion College graduate, Frikken joined Laffey's staff in 2019 after serving as athletic director, assistant basketball coach and head coach of the field hockey team at Livonia Ladywood.

Frikken played on the 2007 MHSAA Division 1 championship softball team, the program's fourth consecutive title. And in her first season as an assistant, Frikken helped Regina take home its most recent championship.

“That was a great experience,” she said. “(Winning) was so much better as a coach. You have an outside perspective. It was a proud moment. And we won in extra innings (3-2 over Howell). Watching (the players) excitement was amazing.”

For Frikken, the moment that's indelibly stamped in her memory is the one that took place minutes after that victory over Howell.

“Diane and I walked back to our cars,” she said. “And we had parked quite a distance from where most people parked, so we walked a while. It was just the two of us, and she asked me what it was like to be a part of something like that. I'll never forget that.”

Frikken first met Laffey at a summer basketball camp while she was still in middle school. There's a bit of a mystique that surrounds a person who has coached for so long and Frikken, like many others, had to remove that barrier before she became comfortable.

“From her, there's the intimidation aspect,” she said. “There (are) so many things she has done. But knowing her, she's very humble. She doesn't want all the attention she gets. She wants her players to have it.” 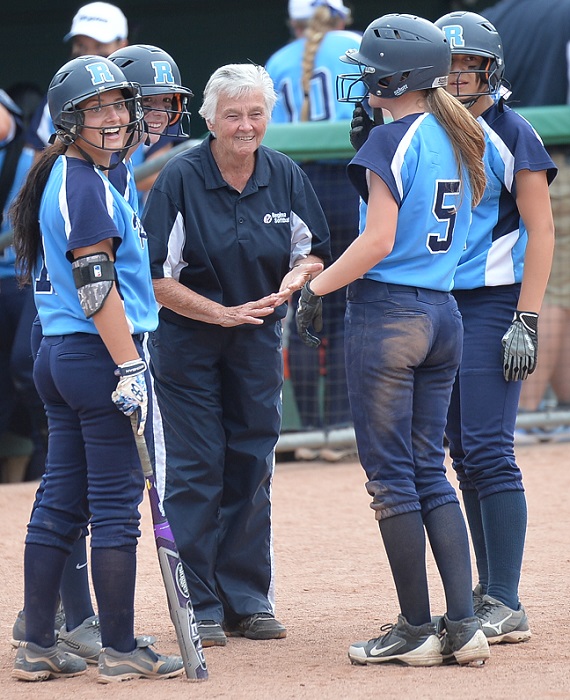 As to why Laffey has had so much success, Frikken said it comes down to basics.

“She keeps it simple,” she said. “She tells her players to play like you're capable of playing. She instills confidence. She brings a lot of passion to both sports.”

In softball, Laffey is Michigan's all-time leader with 1,231 victories.

Like Frikken said, even though Laffey is one of the all-time greats in both sports, she prefers to deflect the attention to others.

“I've had some of the best assistants in the world,” Laffey said. “You have to have someone you can talk to, someone to bounce your ideas off of. Many of our coaches are former players. Our head JV softball coach is an alum. Our JV volleyball coach is an alum, and both the varsity and JV lacrosse coaches are alums. They know the school. They know the program. They kind of know what the program is like; what's expected.”

Laffey also gives kudos to the tremendous athletes she's had the opportunity to coach such as pitcher Nikki Nemitz, who later played at Michigan, and basketball players Sarah Judd (Oakland University) and Paula Sanders, the latter a Miss Basketball finalist and later a star player at Michigan State.

It's uncertain at this time who will become the new head coach in the two sports, but it's safe to assume Laffey will offer an opinion or two. Whomever those in school administration choose, the foundation for success has long been established.

Regardless of who it is, Frikken said she's a better coach and a better person having had Laffey as a coach and now having served as an assistant coach on Laffey’s staff.

“It's not about Xs and Os,” she said. “It's about building relationships with the students. It just wasn't the student-athlete who flocked to be around Diane. Even if you didn't play sports, you wanted to be around her. You can't count how many people she's had an impact on. As a coach, you want to make sure (the players) know you care. And make sure you are a role model for them.

“To play for someone like that is one thing. To coach alongside ... I've learned so much. Regina is very lucky to have her.”

It's not over yet. Laffey returns 10 seniors from a team that reached an MHSAA Regional Final a season ago. Regina won three consecutive softball league titles before Farmington Hills Mercy won the Central in 2021.

Whatever takes place this season, whether there's a league title or a long tournament run in store for her team, what matters most to Laffey is the student part of her student-athletes. She said of the five valedictorians in the school, three are members of her softball team including Abby Hornberger – who has been accepted to begin undergraduate studies at Princeton in the fall.

In the end, Laffey has been deeply touched by all of the attention she has received, especially in recent weeks since announcing her upcoming retirement.

“I've received so many emails congratulating me,” she said. “It's humbling. Very humbling.”

PHOTOS (Top) Diane Laffey accepts the 1991 MHSAA Women in Sports Leadership Award, and at right hands the 2017 Division 1 softball championship trophy to her Regina players. (Middle) Laffey confers with her hitters during a 2015 Division 1 Semifinal.