Jaylin Townsend’s introduction to the state’s track & field scene came a year later than planned, but it was quite a first impression.

As a sophomore, the Flint Beecher star walked out of the Lower Peninsula Division 4 Finals with two individual titles, one relay title and a runner-up finish in another relay.

“It kind of surprised me,” Townsend said. “Coming into the season off of COVID, we could barely get into the weight room, and it was hard to get on the track and run. We couldn’t get the blocks out. It was kind of an eye opener, really.”

Despite it being his first season – the 2020 season was canceled completely – Townsend was dominant throughout. He won all but one of the individual races he competed in, with the lone loss coming in the 200 meters in the first meet of the season.

That was quickly corrected, as he cut nearly four seconds off his time in his next meet and never lost the race again.

The 400 relay team of Townsend, Bradley, Carmelo Harris and James Cummings II took second at the Division 4 Finals with a time of 44.11. It was their first non-DQ loss of the season.

Townsend’s contributions were good for 38 team points, which alone would have placed fourth in Division 4. Beecher as a team finished third with 54 points.

While the immediate success came as a surprise to Townsend, it didn't to his coach.

“I saw it in him,” Beecher coach Joe Wilkerson said. “I knew he could be something special. I told his mother when I talked to her, ‘This guy is going to be a state champ this year.’ There was just something about him that I saw it in him. Lo and behold, he was a three-time state champ. It just made me feel good, because I could trust my own instincts a little bit right now.”

Townsend knows his success will motivate his future opponents even more, but he’s fine with that.

“Going into this year, I know they’re coming for me,” he said. “I know I have to put in some extra work.”

Putting in extra work is something Townsend is used to, as he had to a year ago to get up to speed. He said working on his stride and coming out of the blocks were the main points of emphasis.

“I had to learn a lot, actually,” he said. “Most of the stuff, I was just doing off raw talent. I would make sure to ask Coach, ‘Hey, do you have an extra 30 minutes? Can you stay after?’ My first-ever track meet, when I came out of the blocks, I used to pop right up.”

That has Wilkerson excited, as he believes the sky is the limit for his young star. 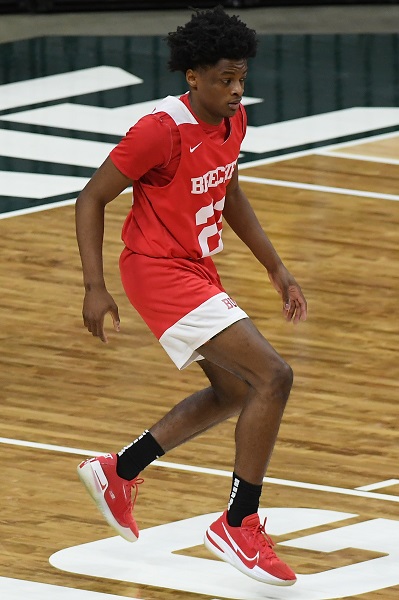 “This guy, he’s exceptional,” said Wilkerson, who has coached track at Beecher on and off since 1979. “I’ve been coaching for a long time, and I’ve never had a student quite like him with that kind of natural ability.”

Townsend’s focus on track is essentially limited to the spring season, as he also plays football and basketball for the Buccaneers.

“I’ve always been a great athlete, and I wanted to continue to be great,” Townsend said. “Going into basketball, it keeps me in shape for track.”

He was a key reserve forward for the Beecher basketball team, which advanced to the Division 3 Semifinals this season. He plays mostly in the post, despite being a shade under 6-foot-1 and 165 pounds.

Football is the sport he’s most focused on, particularly when it comes to competing in college. He plays receiver, free safety and cornerback for Beecher, and said he’s had talks with Central Michigan, Ferris State and Grand Valley State.

It was his performance on the track, though, that really helped to start those.

“When I started posting the speed, some of the colleges started to look like, ‘Hey, we can use this kid,’” Townsend said. “It helped out a lot.”

Heading into his junior track season, he hopes to turn a few more heads. He knows the best way to do that is to hold off the challengers who now have him in their sights, and continue to improve on his times. His goal is to work his 100 time down to 10.5 and his 200 time into the mid 21s.

“It kind of goes together,” he said. “Coming off last season, it put a target on my back, but it made some college coaches want to come to the track meets. They want to see me run. They want to see my speed. It’s nothing I can’t handle, though.”

PHOTOS (Top) Flint Beecher’s Jaylin Townsend, right, turns a corner as he works to get a pace ahead of Saugatuck’s Benny Diaz on the way to winning last season’s LPD4 200 championship. (Middle) Townsend gets ready to defend during last month’s Division 3 Semifinal against Schoolcraft. (Top photo by Will Kennedy; middle photo by Hockey Weekly Action Photos.)