EAST LANSING – The Ottawa Lake Whiteford softball team has been an offensive juggernaut this entire postseason.

Not much changed in Friday’s Division 4 Semifinal.

The No. 2-ranked Bobcats registered 13 hits and used a big second inning to blank Mount Pleasant Sacred Heart 10-0 in 5 innings at Secchia Stadium.

Whiteford (40-4) will play reigning champion Unionville-Sebewaing in Saturday’s 5:30 p.m. Division 4 Final. The Patriots shut out Pickford 13-0 in the other Semifinal.

The Bobcats, who have advanced to the Semifinals four times over the last six years, have outscored their last four MHSAA Tournament opponents by a combined 48-0.

“We can score runs in a few different ways, which obviously is a big advantage, and because we’re so fast and aggressive on the bases that does force the issue for a lot of teams,” Whiteford coach Matt VanBrandt said. “When you know we are going to be running, sometimes you hurry too much defensively, and that’s to our advantage.”

Whiteford jumped out to an early 2-0 lead in the first inning. Junior Alyssa VanBrandt’s single to right field turned into an early run after a fielding error by the Irish allowed her to sprint all the way home.

“I did not expect that to happen,” Alyssa VanBrandt said. “He was waving me home and I was like, ‘I hit a grounder, why is he waving me home?’ But that felt amazing.”

Senior Berlynn Keller followed with a solo home run over the centerfield wall.

The Bobcats poured it on in the second inning with seven runs on seven hits to take a commanding 9-0 lead.

The early barrage of runs helped set the tone.

“Anytime you can get ahead of good teams at the end of the season, it can be a real momentum shift,” Matt VanBrandt said. “And it helps our pitcher stay calm. She knows we can typically score, and it gives her a little more confidence.”

Alyssa VanBrandt and Adrianna VanBrandt, along with Karlei Conard and Shaylin Alexander combined for eight hits.

Ambrelle Billau drove in a pair of runs with a single during the decisive second inning. Sophomore pitcher Unity Nelson tossed a two-hitter and fanned 11 in five innings of work.

“Our whole team has confidence in everyone up and down our lineup, and Unity has been amazing,” Alyssa VanBrandt said. “She hasn’t hardly made any mistakes in our games, and she’s done really well when the pressure is on.”

Sacred Heart (27-12) was making its first appearance in the Semifinals since 2012. The loss snapped a nine-game winning streak.

“It’s been a long time since we’ve been here and I wanted them to experience this, so we got what we wanted out of this,” Irish coach Josh Wheaton said. “I would've liked to put up a little better fight, but anyone that was here to see this game saw one of, if not the best team in the state of Michigan. That is some legitimate next-level talent right there, and that's why they are here a lot.”

The Patriots had no trouble advancing to the Finals for the third straight season behind a powerful offense and stellar pitching.

Senior Laci Harris threw a gem, and the offense supplied plenty of support.

This has been Harris’ first season as lead pitcher after playing third base the past three for the top-ranked Patriots. 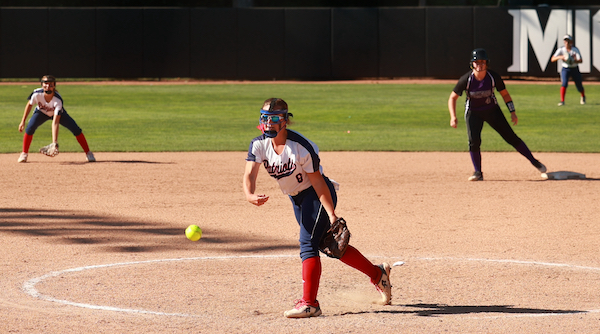 “It means a lot to me to finish in a Final like this because this was my first and only season to be our No. 1 pitcher,” Harris said. “I threw a lot of curveballs, and it was my best pitch. They weren’t touching it at all.”

Harris struck out 10 and walked one. Her bid for a no-hitter ended with one out in the bottom of the fifth inning when Finley Hudecek singled.

“Her pitches were working today, and she overpowered them,” USA coach Isaiah Gainforth said. “When her pitches are working good, she’s always going to give us a chance to win.

“This is something as a little girl she’s dreamt of, to be the pitcher that gets her team to the state championship. A senior in the circle is a good thing to have.”

The Patriots have won four of the last six Division 4 championships, including the most recent two in 2019 and 2021.

“You always want to get to the last week of the season and play in the last game, and literally we can say we are playing in the last game,” Gainforth said. “It’s pretty cool. It’s what we’ve worked for and prepared for, and for it to come to fruition is good, but we’re not done yet. We still have one more tough one ahead.”

USA scored runs in each of the first three innings.

The Patriots exploded for six runs in the third inning, with five coming before Pickford could get the first out. Sophomore Gabrielle Crumm slapped a two-run double to the wall to put the Patriots ahead 9-0.

Crumm went 3-for-4 with four RBI, while Rylie Betson added two hits and three RBI and Harris helped her cause with two hits and a pair of RBI.

A historic season came to an end for the Panthers (25-15-2), who won the program’s first District title en route to the Semifinals.

“This was an amazing run,” second-year coach Matt Hudecek said. “Districts was our goal, and then after that this was bonus softball. We caught fire in Regionals and were able to get down here.”