Ramey and her teammates took the same path this season. But this time, they enjoyed a much different emotion.

“Last year, that same walk we just had was a different type of feeling,” said Ramey, who had a home run and a pair of outstanding defensive plays in her team’s championship game return.

“Now that we came back here, we rewrote the story and it just feels amazing.”

Ramey, who will play at the University of Michigan, was one of eight starters back from last year.

“That was our main focus, and we really wanted to get here again,” she said. “It was just nice to execute today, and we really fed off each other’s energy. That’s what it has been about these last few games. Our energy has kept us in the game.”

Allen Park coach Michael Kish, whose team finished 38-4-1, said his team was determined to return to the Final and avenge last season’s loss.

“Three hundred and 65 days of motivation,” he said. “Six a.m. workouts, we had 12-hour days and we did everything we could. That was my thing. I know the more you invest, the more it’s going to be worth it.

“We knew we had the talent; that wasn’t the issue. It was more of the confidence and the family aspect.”

In the third inning, Allen Park snared the early momentum. 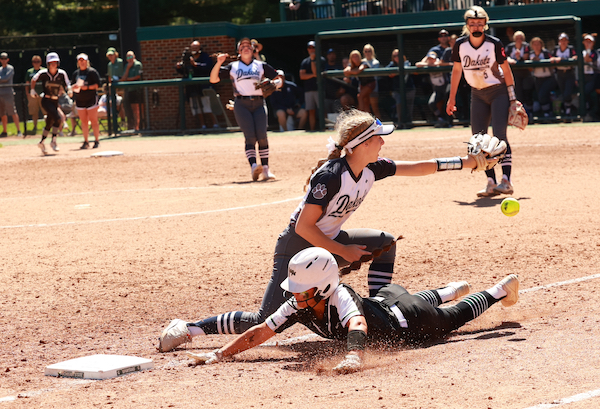 After a leadoff single by senior Madison Hool and a sacrifice bunt, freshman Kiley Carr tripled over the right fielder’s head to give the Jaguars a 1-0 lead.

Carr would score to make it 2-0 after a Dakota fielding error off the bat of Makalya Sitarski.

A squeeze bunt by Avery Garden sent Sitarski home, and it was 3-0.

“That inning was huge, and it’s momentum,” Kish said. “Before the game we were loose, and we’ve been here before. They had the nerves, and we knew if we got on them early it would be tough for them to come back.”

In the sixth inning, senior Madilyn Ramey slugged a solo home run and the lead expanded to 4-0.

“It felt amazing,” Ramey said. “I hit one last year here. My first at bat I struck out and I just had to reset, and it felt great to get that.”

“She’s a gamer, she’s a competitor and she plays the game like a 10-year-old girl that just fell in love with the game,” Kish said.

Allen Park tacked on one more in the top of the seventh inning. Another sacrifice bunt from Garden scored Faith Peschke, who led off the inning with a walk.

Third-ranked Dakota (32-5), which won the Division 1 title in 2017, outhit the Jaguars 5-4, but couldn’t get any timely ones off Allen Park senior pitcher Morgan Sizemore and a stellar defense.

“That’s a really good team over there,” Cougars coach Dan Vitale said. “They are well coached and their shortstop … we know why she’s committed to Michigan. She made some great plays against us and stole some hits from us.

“We weren’t expected to get this far, and we did, so we’re really proud of our kids. We plan on being here next year.”

PHOTOS (Top) Madilyn Ramey’s teammates welcome her at the plate after a sixth-inning home run Saturday at Secchia Stadium. (Middle) An Allen Park runner gets back to third base as Dakota’s Gracie Maloney takes a throw.