Saturday’s Division 2 Final provided another tightly-contested matchup until the Lancers pulled away in the late innings.

The Lancers (40-4) rallied to defeat Trenton 6-2 at Secchia Stadium and won the program’s eighth Finals championship and first since 2014.

Lakeshore’s previous three games all were decided by one run, and this one wasn’t decided until the Lancers scored six runs over the final three innings to erase a 2-0 deficit.

“We tried to instill in the team that pressure wasn't a hardship, it was an honor,” said Lancers senior Anna Chellman, who had two hits and two RBI.

“It was an awesome opportunity to be put in these high-pressure situations because that’s how you make it through to the state finals.”

Chellman and senior Gianna Kerschbaum were on the 2019 squad that lost to Escanaba, 7-3, in the Division 2 Final.

“I can’t fathom this,” Chellman said. “I was here as a freshman when we got second, and Gianna and I have been dreaming about this since that day we lost. Just the way we were able to work through COVID and our junior year. Everyone was on board, and we knew we could pull together and win this.”

Trenton (33-11) was in a Final for the first time since 2005 and seeking its first championship.

The Trojans grabbed the early lead with RBI singles from Annika Segedi and Aleah Tanguay in the third and fourth innings, respectively.

The Lancers, however, mounted a comeback in the top of the fifth.

A single from Gabby Solloway and an error scored two to knot the score at 2-2. Solloway advanced to third on the error and then scored the go-ahead run on a ground out. 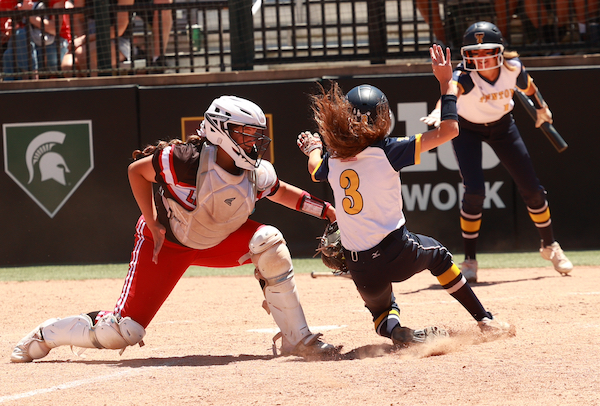 “We had one hit every inning early so we saw that we could hit her,” Chellman said. “If we kept attacking her then we knew it would happen, and it did. Gabby had a great hit, and it broke it open for all of us.”

Lakeshore extended its lead in the sixth inning thanks to a leadoff double by Pallas Dominion, who scored on a fielder’s choice.

The Lancers added a pair of insurance runs in the top of the seventh. A double by Chellman that glanced off the glove of the left fielder scored Kerschbaum, and a sacrifice fly from Eden Gray brought home Solloway.

Lakeshore coach Denny Dock, the third-winningest in MHSAA softball history, pointed to his defense as the turning point after his team fell behind early.

“We’ve played some unbelievable teams and we’ve played unbelievable defense, especially the last half of the year,” Dock said. “From the third inning on I thought defense started to carry us again like it has been, and a huge play was Eva (Kerschbaum) throwing that girl out at second base, and then the last out Gianna makes a phenomenal running catch to get that third out.”

Junior Ava Mullen and sophomore Avery Atwood combined to allow six hits and one earned run. They struck out six and walked one.

“We pitched around the plate, and both girls did fine,” Dock said. “It’s been that way all year with them, and we just hung on and pitched a great seventh (inning).”

Trenton coach Rick Tanguay was pleased with where his team stood after four innings, but two errors proved pivotal in the Lancers’ comeback.

“We battled, and we had them, but we made a couple of mistakes and that’s what cost us,” Tanguay said. “We just made a couple bad decisions on a couple of balls, but the girls were trying their hardest.

“We came into the season with high hopes. We lost a very good player (Michigan recruit Lillian Vallimont, who missed the season with an injury) before the season started, but this team responded and went to the Finals without her. I'm proud of them.”

Segedi, a sophomore, was the only Trojan to collect multiple hits.