EAST LANSING – Buchanan had no shortage of heroes in its 3-1 Division 3 championship game win over Detroit Edison on Saturday at McLane Stadium.

Among them: Cade Preissing, who walked three times and scored all three runs for the Bucks; Matthew Hoover, who drove in two runs with a pair of doubles and also got the W on the mound, and pitcher Macoy West, who made a stratagem by Buchanan coach Jim Brawley pay off by relieving Hoover twice at crucial times to pick up the save.

“I’m very proud of these young men,” Brawley said. “They've worked their butts off all year. They deserve it. They really do.”

The championship was Buchanan's first since 1985. The Bucks most recently finished Division 3 runner-up in 2015.

They won this game with clutch hitting, scoring runs in the third and fifth innings with two outs.

Both times, Preissing walked, then scored on doubles by Hoover.

“(Preissing) is a smart kid, a great hitter,” Brawley said. “He knows how to get on base, steal the bag, and Matthew brings him in.”

“I just tried to slow the moment down,” Hoover said. “Just put it in play. I’m glad I did. We won because of that.” 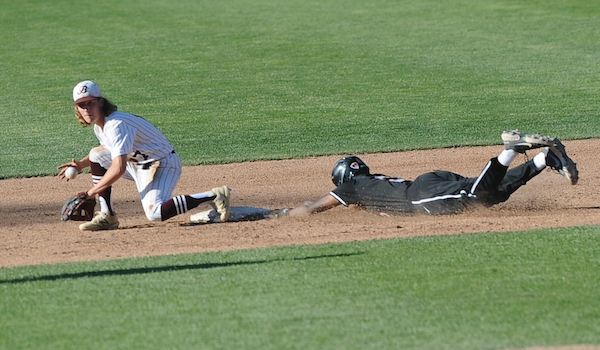 Edison, the first Detroit public school to play for a Finals title in baseball since Detroit Western in 1972, continuously answered to stay close.

That’s where Brawley’s stratagem came in.

Noting that Edison won its first postseason game after its opponent had to pull its starting pitcher due to a pitch limit, Brawley opted to replace Hoover with West in the sixth inning to pitch to the lower third of the Pioneers’ order.

Hoover was back on the mound to start the seventh inning.

Edison got things going with a Terrell Crosson single, although he was a force out when Deshaun Williams reached on a fielder’s choice. But two walks loaded the bases.

In came West, who fell behind 3-1 to the only batter he faced – before coming back to get a strikeout and seal the win.

“We had opportunities,” Edison coach Mark Brown said. “It just wasn’t meant to be”

For the Bucks, it was a crowning achievement for a group that grew up playing baseball and reached their sport’s pinnacle.

“I’m just glad we finally did it,” Hoover said, his voice breaking with emotion. “We've been playing since we were 8 years old, playing in summer league, playing in the backyard. It means so much to me”