Two of the longest MHSAA Finals days at Ford Field – capped by two of the most exciting championship games in recent memory – concluded the 2021 football season this weekend.

Fans were able to savor every moment until nearly midnight both nights, and more than 38,000 made the trip to Detroit over the two-day 11-player event. That was in addition to those who journeyed from near and far the weekend before for the 8-Player Finals at Northern Michigan University’s Superior Dome, where a pair of repeat champions reigned again.

Second Half covered all 10 championship games, with quick recaps and links (click on the game scores) to those stories below followed by notations of performances entered into the MHSAA Finals record book and a report on some of the biggest and best stories to emerge from the championship weekends. 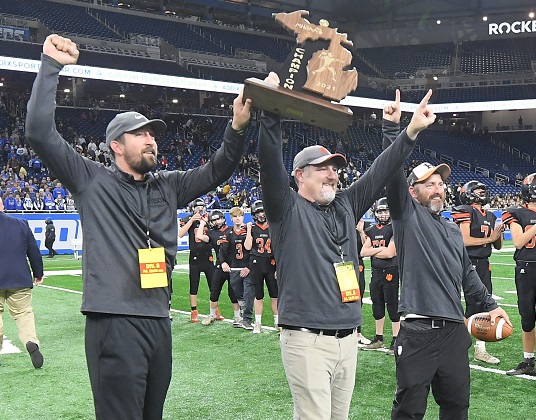 After falling a win short of reaching the Final the last three seasons, Belleville advanced this fall and completed its first championship run. Freshman quarterback Bryce Underwood showed on a statewide stage why he’s received lots of attention during his high school debut, and he was surrounded by seniors including receiver Jeremiah Caldwell who helped carry the Tigers to the win.

After falling in last season’s championship game, De La Salle took the next step in winning its fourth Finals title – and with expectations we could see the Pilots back at Ford Field again in 2022. Junior quarterback Brady Drogosh has been a big part of both trips, and this time he had a hand in 316 total yards and four touchdowns either running or passing.

Two of the state’s premier quarterbacks were on display, junior Dante Moore for King and senior Ty Holtz for reigning champ DeWitt. But the deciding play was a defensive stand – specifically, the Crusaders stopping a 4th-and-goal from their 1-yard line with 2:34 to play. Both teams brought interceptions back for touchdowns, Holtz making the grab and score for DeWitt.

This is the game from this weekend many will be referring to years from now. Take your pick why – the 11-Player Finals record 107 combined points, Chelsea’s also-record 28-point comeback over the final 23 minutes, the fact Unity Christian had set the season record for points scored during the game. Maybe the walk-off field goal by Hunter Shaw saved in part by the deft handling of a short snap by quarterback/holder Lucas Dunn.

The Cougars won their second-straight championship in Division 5 and fifth over the last six seasons to go with Division 4 titles in 2016, 2017 and 2019. They did so with what has to be one of the finest back-up quarterbacking performances ever – senior John Passinault stepped in for injured past Finals star Joey Silveri and threw for 2,307 yards and 37 touchdowns this fall.

The Cougars have been known for their offensive production over the last decade or more, but the defense led the way to their second championship in three seasons – they had won Division 5 in 2019. Lansing Catholic gave up only 40 points – or eight per game – during this playoff run, and in this game took advantage of four interceptions and a fumble recovery.

The Pirates added their fourth championship in six seasons, capping a run which saw them win their league and defeat eight more league champions along the way – one of them Lansing Catholic, the eventual Division 6 title winner. P-W had accomplished most of it with key players out with injuries, but multiple returned to lead the Pirates past Lawton, which was making its first Finals appearance.

Defense has reigned in Division 8 the last few seasons, with Hudson following recent champions Centreville and Reading in thriving on that side of the ball. The Tigers ended their undefeated season having given up only 99 points (7.1 per game), and this time stopped a Beal City team averaging 35.5 points per contest entering Ford Field.

A rematch of last season’s Division 1 Final was more closely contested, but with the same result as Lenawee Christian finished its second-straight undefeated campaign. Cougars quarterback Ashur Bryja is a name to remember – he opened the scoring 51 seconds in with an interception return touchdown, ran for two more scores and threw for 229 yards.

The Jets won their second-straight Division 2 title and fourth 8-player championship total, and put up a combined 133 points over those last two Finals wins. North Central had 520 yards of total offense this time. Wyatt Raab, Luke Gorzinski and Alex Naser all scored two touchdowns, and Gorzinski also was the team’s leading tackler. 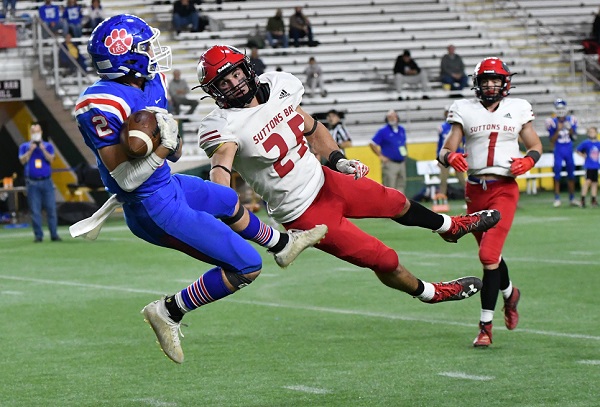 Chelsea and Hudsonville blew past the previous record of 94 combined points in an 11-Player Finals game with their combined 107. Chelsea’s 55 tied for third-most, with Unity Christian now sitting at sixth on that list after Belleville also scored 55 in Division 1.

As expected from a 55-52 game, Chelsea ended up with the fourth-most total yardage in 11-Player Finals history, with 533, and the teams’ combined total of 1,024 ranks second. Chelsea’s 28 first downs are tied for third-most.

Chelsea’s Lucas Hanifan tied 11-player championship game records with 30 points and five touchdowns, and set the receiving touchdowns record by two with that total. His quarterback Lucas Dunn set the 11-Player Finals record with six touchdown passes while also making the yardage list with 308, pass attempts list with 36 and completions list with 25. Hanifan’s nine receptions also rank among the most in that category.

Warren De La Salle Collegiate became the 22nd team to keep an opponent from completing a pass, shutting out Traverse City Central on its nine attempts. Detroit Martin Luther King became the 29th team to not punt in an 11-Player Final.

De La Salle quarterback Brady Drogosh also made the total yardage list with 316 (including 174 rushing). King’s Dante Moore made the completions list with 18 on 24 attempts.

Chelsea’s Hunter Shaw and Belleville’s Brayden Lane tied the 11-Player Finals record held by three others with seven extra points, while in Division 2, De La Salle’s Brady Lowe made the extra point list with five. Shaw and Adams’ Colin Timko became the 11th and 12th, respectively, to make two or more field goals, Timko hitting from 27 and 35 yards in the Division 1 game and Shaw from 26 and 33.

Hudson’s march to victory included 282 rushing yards on 64 carries, which tied for the eighth-most runs by one team in an 11-Player Final.

Powers North Central’s big win was accompanied by multiple scoring record book entries, including for 29 points in a quarter (third most), 49 in the first half (first) and 63 for one game (also ranking third). The Jets also made the team rushing yardage list with 328 and the team first downs list with 20. North Central also became the first in the category for fewest rushing yards allowed, holding Colon to -14.

Suttons Bay’s August Schaub set a record that will be tough to match, returning an interception 99 yards for a touchdown against Lenawee Christian. 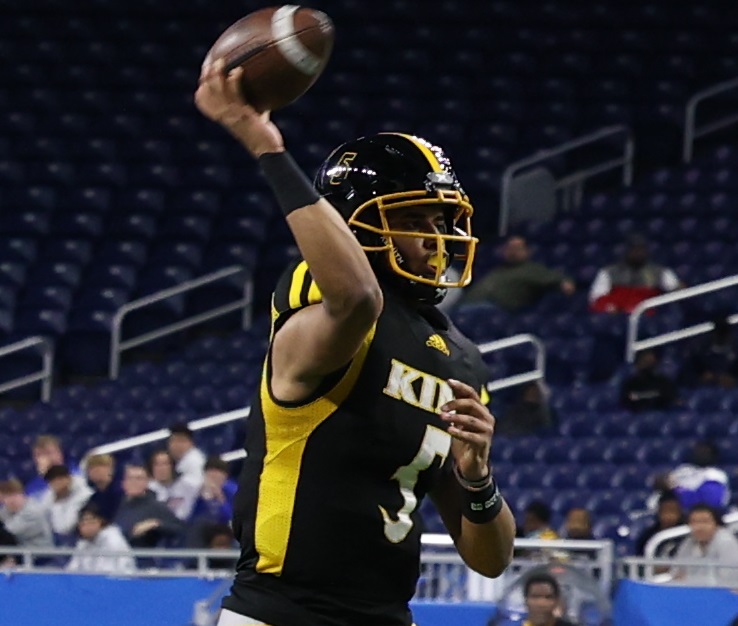 Stories Behind the Scores

Winning streaks grow: A few of this season’s winners not only repeated as champions, but extended overall winning streaks that will be followed closely next season. Grand Rapids Catholic Central has won 36 straight games, tied for the sixth-longest undefeated run. Lenawee Christian has won all 24 8-player games it’s played over the last two seasons, and North Central also is 24-0 over the last two.

QB Power: Michigan is graduating another fine class of high school quarterbacks – DeWitt’s Ty Holtz, in particular, provided two seasons of memories leading the Panthers on back-to-back trips to Ford Field. But we should expect to see some of the other 2021 championship signal-callers a lot next season. King’s Dante Moore will close one of the most highly-followed careers in some time, and De La Salle’s Brady Drogosh will be watched just as much next fall. Belleville’s Bryce Underwood will generate plenty of statewide interest over the next three seasons. As noted, Lenawee Christian’s Ashur Bryja is one of the next stars among the small schools, and North Central’s Luke Gorzinski has led two championship runs and still is just a junior. Two more to remember: Marine City junior Jeffery Heaslip was a standout run/pass threat in leading his team to the Division 5 Final, and Rochester Adams junior Parker Picot became known at least in-state as much for football leading his team in Division 1 as he’s known as a top-level baseball prospect.

No taking ‘normal’ for granted: Those who experienced the start-stop-start 2020 season will never forget it, nor should any of us who had the opportunity to enjoy a more “normal” 2021. With COVID-19 ever present, Michigan high schools did their parts again to play safely this fall. And proper perspective remains a great teacher of just how much that’s worth.