The paths to league championships are getting clearer for many teams all over Michigan as we sprint past the midpoint of this regular season.

Multiple teams clinched at least shares of conference titles during the final weekend of September – while many others now have located paths (some straight forward, and others with plenty of twists and turns) to accomplishing the same.

Read on as we highlight 45 games from Week 5 that likely helped shape where we’re headed over the final four weeks before playoff selection.

HEADLINER Frankenmuth 48, Freeland 21 The Eagles (5-0) set themselves up well in the Tri-Valley Conference East race by handing Freeland its first loss this season. Frankenmuth moved into first place alone, with Week 8 opponent Essexville Garber its only league opponent left with a record above .500 at this point in the season. Cole Lindow ran for 318 yards including a 93-yarder as the Eagles scored more points than Freeland (4-1) had given up total over its first four games. Click for more from the Saginaw News.

The Frankenmuth defense was living in the backfield in the Eagles 48-21 win over Freeland!

Watch list Montrose 35, New Lothrop 14 The Rams’ first win over three-time reigning champ New Lothrop since the Mid-Michigan Activities Conference was formed in 2018 also was the Hornets’ first defeat in any league play since 2009. Now both and Durand are one game behind solo league leader Ovid-Elsie.

Remember this one Flint Hamady 26, Flint Beecher 20 This rivalry matchup is always memorable and this season once again decided at least part of a league title, with Hamady (3-2) clinching a share of the Genesee Area Conference championship.

More shoutouts Millington 30, Carrollton 12 The Cardinals (5-0) clinched a share of the TVC-West I after finishing league runner-up a year ago. Mount Pleasant 26, Midland 19 This win combined with Midland Dow’s 45-44 edging of Bay City Western sent the Oilers (5-0) into first place alone in the Saginaw Valley League Blue.

HEADLINER Brownstown Woodhaven 33, Allen Park 28 On a night with its share of last-second go-ahead scores, Woodhaven benefited from one of the loudest as Cornell Perry pulled in an Ashton Mohlman pass with 10 seconds left to pull the Warriors (5-0) past Allen Park and into first place alone in the Downriver League. The Warriors have won the last three meetings with Allen Park (4-1) since a 2018 loss to the Jaguars cost Woodhaven an outright league title. Click for more from the Southgate News-Herald

Watch list Belleville 21 Dearborn Fordson 19 Belleville (4-1) potentially earned its way back into the Kensington Lakes Activities Association East race by pulling Fordson (4-1) out of a first-place tie with Livonia Churchill, and with Fordson and Churchill set to meet Week 7.

Remember this one Warren De La Salle Collegiate 49, Orchard Lake St. Mary’s 25 The Pilots (4-0) clinched a share of the Detroit Catholic League Central title and can claim it outright this week against Detroit Catholic Central, while St. Mary’s (4-1) could still earn a Prep Bowl rematch.

More shoutouts Clinton Township Chippewa Valley 37, Romeo 34 This combined with Sterling Heights Stevenson’s 31-16 win over Macomb Dakota has Stevenson first and Chippewa Valley and Romeo tied for second in the Macomb Area Conference Red, with Stevenson seeing Chippewa Valley next and Romeo on Oct. 8. South Lyon 49, White Lake Lakeland 35 The Lakes Valley Conference will still be playing out for a few weeks, but this sent South Lyon (5-0) into first place alone with Waterford Mott in Week 8 the most major obstacle left. Lakeland (4-1) sits a half-game back with Week 9 against Milford potentially becoming a huge matchup.

HEADLINER Beal City 55, Evart 20 The Aggies (4-1) suddenly have what appears a very defendable lead in the Highland Conference after sending Evart into second place. Beal City’s final three league opponents are a combined 4-11 and Evart (4-1) had defeated those same opponents to open league play 3-0. The Wildcats hadn’t scored fewer than 40 points in a game before Beal’s defense cut that in half. Click for more from the Mount Pleasant Morning Sun.

Watch list Ovid-Elsie 35, Chesaning 0 As noted above, Ovid-Elsie (4-1) moved into the lead in the MMAC, and reigning champ New Lothrop is up next. But the Marauders also are coming off two straight shutouts after sending Chesaning to 3-2.

Remember this one DeWitt 57, Grand Ledge 15 With heavies East Lansing, Holt and now Grand Ledge behind them, the Panthers (4-1) have paved a nice path toward continuing a league title streak that began in 2006.

More shoutouts Pewamo-Westphalia 42, Fowler 6 This rivalry win put P-W (5-0) in position to clinch a share of the Central Michigan Athletic Conference title in two weeks, although first the Pirates take on another league leader this Friday in Olivet. Portland 49, Charlotte 7 Portland (5-0) and Lansing Catholic will decide the Capital Area Activities Conference White title again this week after the Raiders got past a Charlotte contender that at 3-2 is off to its best start in eight years. 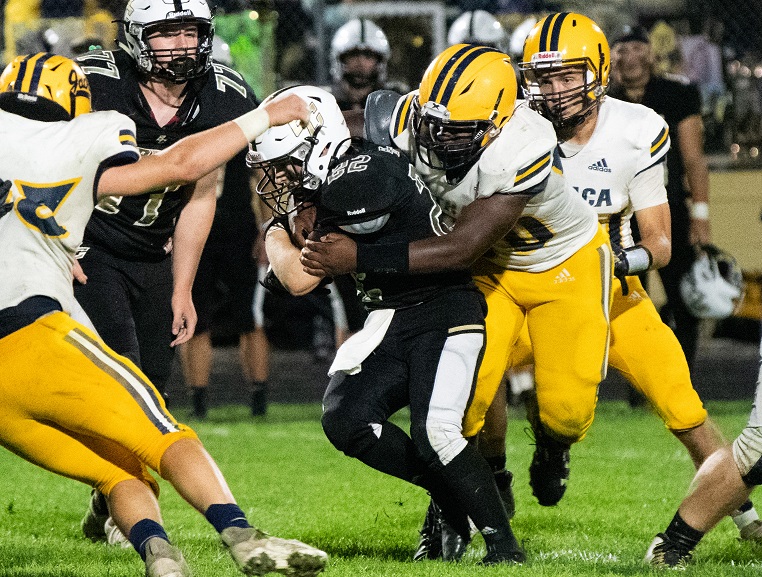 HEADLINER Kingsley 24, Grayling 20 Gage Hessem’s touchdown pass to True Beeman with 5:38 to play helped the Stags (5-0) pull away from their biggest scare so far this fall as they play for a third-straight league title. Circle Week 9 against Traverse City St. Francis as a likely decider in the Northern Michigan Football League Legends division. Click for more from the Traverse City Record-Eagle.

Watch list East Jordan 38, Oscoda 0 This is the second time East Jordan has been listed here this season, and we’ll keep watching. The Red Devils (4-1) are lining up potentially their best season in two decades, with this second-straight shutout putting them in position to play for the NMFL Legacy title over the final two weeks of the regular season.

Remember this one Traverse City St. Francis 48, Boyne City 14 This was arguably the most impressive offensive performance of plenty this fall for the Gladiators (5-0), and no doubt will be recalled as we move closer to playoff time as Boyne City (4-1) was unbeaten and otherwise hasn’t budged much defensively.

Watch list Ann Arbor Huron 38, Monroe 14 The River Rats (4-1) continued to build on a fall full of highlights, with this win giving them their most victories for a season since 2009 and pulling them up to No. 17 in Division 1 playoff points.

Remember this one Hudson 22, Ida 14 The Tigers (5-0) moved into first alone in the Lenawee County Athletic Association, and Week 9 opponent Dundee is the only one of three second-place teams Hudson has yet to face.

More shoutouts Ottawa Lake Whiteford 58, Sand Creek 30 The Bobcats (4-1) remain with Erie Mason the only teams undefeated in Tri-County Conference play after handing Sand Creek (3-2) its first league loss. Homer 28, Union City 22 A week after Union City (2-3) downed another contender in Reading, Big 8 Conference second-place Homer (3-2) edged the Chargers to remain in the title hunt. Homer will be hoping for help this week as Reading takes on league leader Jonesville.

HEADLINER Centreville 32, White Pigeon 16 The reigning Division 8 champ Bulldogs have bounced back well after an opening-night loss to Niles Brandywine, and with this win kept themselves in position to earn a share of the Southwest 10 Conference championship this week against co-leader Cassopolis. White Pigeon (4-1) also entered this game tied for first before Centreville’s defense slowed a Chiefs offense that was averaging 46 points per game. The Bulldogs (4-1) have given up a total of 23 points over their last four. Click for more from the Sturgis Journal.

Watch list Berrien Springs 34, Watervliet 6 The Shamrocks (5-0) begin league play this week in the Berrien-Cass-St. Joseph Conference, and will do so after shutting down formerly-undefeated Watervliet (4-1).

Remember this one Portage Central 23, Battle Creek Lakeview 22 A late touchdown and two-point conversion pushed Portage Central (3-2) past the Spartans (3-2) and kept them in the hunt in the Southwestern Michigan Athletic Conference with league leader St. Joseph coming to Portage this week.

More shoutouts Edwardsburg 49, Plainwell 0 The Eddies’ wild numbers grew again in handing Plainwell its first loss; Edwardsburg is 5-0 with four shutouts and only seven points allowed this season, against an average of 50 points scored per game. Constantine 64, Parchment 14 Four of five teams in the Southwestern Athletic Conference Lakeshore are 3-2 or better, including both of these – and Constantine (5-0) is tied for the early league lead. 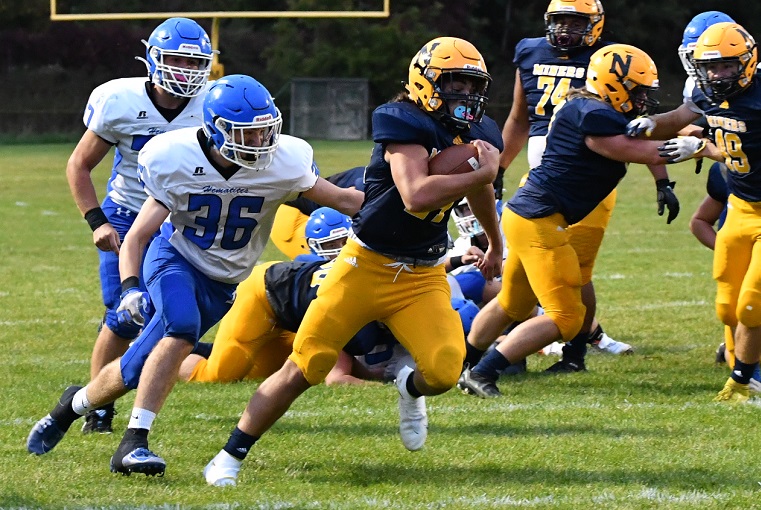 HEADLINER Hancock 20, Houghton 17 Rain soaked this season’s Copper Bowl and surely made it all the more memorable as Hancock (3-2) scored the final points to secure its fourth win in the last five games played against the rival Gremlins (3-2). This victory also muddied up the Western Peninsula Athletic Conference Copper standings a bit more – all seven teams in the league are either 3-2 or 4-1 overall, and all seven could still win the league title. Click for more from the Houghton Daily Mining Gazette.

Watch list Iron Mountain 28, Bark River-Harris 22 Don’t count the Mountaineers out of anything yet, including that West-PAC Copper race. Despite a pair of losses in Weeks 2 and 3, Iron Mountain (3-2) has bounced back with two wins including this one over the West-PAC Iron-leading Broncos (3-2).

Remember this one Kingsford 44, Escanaba 7 The last time Kingsford (4-1) defeated Escanaba, the Flivvers won the Great Northern Conference championship. They have only Menominee left on the league schedule, in Week 9, but also will need the Maroons’ help with Marquette after losing to the latter in Week 4.

More shoutouts Sault Ste. Marie 14, Ogemaw Heights 6 The Blue Devils moved to 4-1 and still have a chance to play spoiler – or more – in the NMFL Legends with St Francis coming up in Week 7. Marquette 43, Gladstone 12 Marquette (4-1) is in position to win the GNC outright with an offense that has gone over 40 points in four of five games this fall. Marquette faces Menominee in Week 7.

HEADLINER Rockford 21, Hudsonville 16 The Rams (5-0) navigated their second-straight one-score win to keep pace with Caledonia atop the Ottawa-Kent Conference Red. Hudsonville went ahead 16-14 early in the second half, but Zak Ahern’s five-yard run put Rockford back on top to stay with 2:58 to go in the third quarter. Ahern averaged nearly 10 yards per carry, tallying 153 on 16 rushes. For Hudsonville (2-3), it was another heartbreaker; all three of the Eagles’ defeats have come by five points or fewer. Click for more from the Grand Rapids Press.

Jason Hutton brings you the highlights of the Rockford (@RockfordRamsFB) vs. Hudsonville football game from Friday night. @RockfordAD

Watch list Coopersville 24, Allendale 6 The Broncos (5-0) have guaranteed their first winning regular season since 2017 and are off to their best start since 2003. They also are one of four teams at 3-0 in O-K Blue play.

Remember this one Sparta 21, Belding 14 (OT) The Spartans (3-2) may have worked their way back into the O-K Silver title conversation. A seven-point loss to leader Comstock Park in Week 3 put them a game back, but Belding (4-1) takes on Comstock Park this week with an opportunity to open the league race up to at least four teams.

More shoutouts Muskegon Mona Shore 49, Zeeland East 30 As a Week 7 matchup with rival Muskegon High draws nearer, the Sailors (4-1) and Big Reds have done their parts to push East (3-2) and others farther out of the O-K Green title picture. Reed City 22, Big Rapids 7 The Coyotes (4-1) might be pulling away from the Central State Activities Association Gold pack, with this win over Big Rapids (3-2) their second against a team currently tied for second in the league – and the third team, Central Montcalm, is up this week. 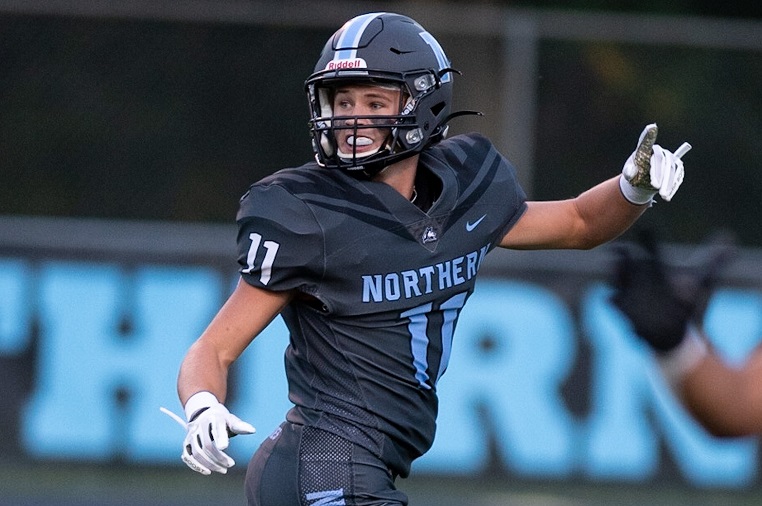 HEADLINER Adrian Lenawee Christian 47, Colon 21 One of the most anticipated matchups this regular season turned into another solid win for the Cougars, even as Colon (4-1) became the first opponent to score in double digits against Lenawee Christian since last season’s Division 1 Semifinals. The Cougars (5-0) scored 47 points on a defense that had given up only 28 total through the first four weeks, including with a 31-6 run over the final three quarters. Click for more from the Adrian Daily Telegram.

Remember this one Newberry 34, Rudyard 28 With three games left in the GLEC East schedule, these two are joined by Pickford and Munising tied for first in the league after Rudyard (4-1) entered the weekend alone at the top. Newberry also is 4-1 overall.

More shoutouts Climax-Scotts 52, Athens 14 The Panthers (4-1) will be the next to try to dethrone Lenawee Christian in league play with this big win keeping them tied atop the Southern Central Athletic Association A standings. Suttons Bay 46, Munising 0 The undefeated Norsemen (5-0) continued to shine on both sides of the ball, with this shutout taking their defensive points allowed average down to 9.2.