By Dennis Grall
For the Second Half

ESCANABA – It should not come as a surprise that the Class A school with the highest percentage of multi-sport athletes has an athletic director who lived that life.

Alex Tiseo, athletic director at Marquette High School, received 15 varsity letters while he was a student at the school, including as a three-sport participant for two years in the fall alone. Tiseo played soccer for four years while running cross country for three years and playing football for two. He also played basketball and ran track.

He is not taking any credit for the excess of multi-sport athletes at his alma mater. "It is the foundation of the thing, the culture of the coaches," Tiseo said of all the school's coaches supporting and encouraging all-around athletic participation.

"It is the benefit and mentality of getting away from (athletic) specialization," Tiseo said, noting an athlete may be "a leader in one sport and just a role player" in another.

He also pointed out athletes are not penalized when they have to miss practices or events because of their heavy extracurricular participation.

According to the most recent multi-sport participation survey conducted by the Michigan High School Athletic Association, Marquette had the highest percentage of multi-sport athletes among all Class A schools in 2018-19 with a whopping 85.9 percent. Grand Rapids Northview, at 83.1 percent, was the only other large school above 80 percent.

"It is near and dear to my heart," Tiseo said of seeing multi-sport participation. Students must pick a priority sport if practices or games would conflict on the same date. "For me, it was cross country," Tiseo said, noting his soccer and football coaches knew he was getting plenty of running in that primary sport. In football, he was a place-kicker, which made it easier if he had to miss a practice.

He would often kick with his dad, he said, agreeing that a primary position player may have found it harder to miss a practice or game.

He also pointed out that in fall sports, "one-third of the season comes before school starts" and fall sports ended in mid to late October, reducing the number of potential conflicts.

Tiseo said multi-sport athletes work closely with their coaches to arrange practice schedules: "If coaches have difficulty with the kids in putting the schedule together, there is a caveat there where I can help." To date he has not needed to assist.

Students and coaches alike "reinforce the importance of academics," Tiseo said. "Multi-sport athletes are definitely among our highest academic achievers."

Athletes realize, he said, the importance of staying academically eligible so they can compete in their athletic endeavors.

Tiseo also has noticed student-athletes in general maintain better attitudes, which permeates the hallways and classrooms and benefits the general student body.

Success in athletics can generally bolster improved spirit and attitude in school. He said there is a general attitude of wanting to participate in something "when you see your peers having fun." The long Upper Peninsula winters also help encourage students to participate in athletics to help the time speed along. "It also correlates with the success of the teams," he said.

Two other Upper Peninsula schools have also found outstanding multi-sport participation, with Class B Gladstone at 86.7 percent and Class D Watersmeet with 90.3 percent during 2018-19. 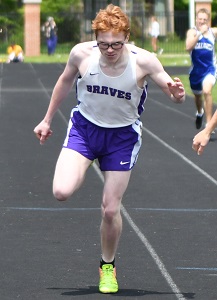 First-year Gladstone athletic director Dave Lindbeck said "I strongly promote for kids to go to the next level. When I hire a new coach, I ask them how they feel about (multi-sport participation)."

Like Tiseo, Lindbeck also encourages athletes to get involved in programs for lifting weights and nutritional growth. Tiseo said proper conditioning and nutrition "help lessen the risk of injury" and playing multiple sports allows students to use different sets of muscles in those various activities. "You don't see over-use injuries" he said.

Lindbeck said "a good strength and conditioning program involves everything, including in-season and off-season workouts and help them maintain strength. We're not asking kids to bulk up. There is a lot of strength and flexibility (training), working (various) muscle groups, strengthen(ing) ligaments."

Lindbeck said the Braves' coaches are encouraged to attend games in the wide selection of activities, which shows students they care.

He also said it is easy to see how students grow in athletics and socially as they raise their participation levels. "You see how they communicate, you see it in the hallways," he said.

He also noted it has a big impact on their classroom work. "Those who don't participate don't do as well," he said, noting B-C students tend to improve their grade-point averages as they increase their involvement. "Kids seldom have issues with their grades.

"It is so crucial to be involved with sports," Lindbeck added. "The ones who do it really value it. We use it as a carrot, a motivator. It also keeps the structure and holds each other accountable."

Watersmeet has only 44 students this school year – up from 36 last year – but the Nimrods definitely are a school and community-oriented program.

Pizza parties, camping trips and cook-outs are among projects to encourage students to participate in sports, and fund-raisers are used to buy warm-ups for players in grades 6-12. "We dress them up so they look special," said long-time administrator-coach George Peterson.

"We work hard to get them to enjoy all the sports."

The board of education uses the Nimrod Fund to help students "dress up and be a part of it," said Peterson, who indicated much of that financial opportunity comes from the memorable 2003-04 season when ESPN coined the "Nimrod Nation" program.

That spring the boys basketball team appeared on The Tonight Show, and the Sundance Channel did a series on the school/town in 2006.

Peterson said the school realized $500,000 in gross revenue as a result of that national exposure and still averages $10-13,000 a year in profits. "I still pinch myself. I still can't believe it happened," Peterson said of that exposure and financial benefit.

Watersmeet has girls volleyball and offers cross country country, basketball, track and golf for boys and girls. "They are proud to be out there," said Peterson. "They have to conduct themselves in a respectful manner.”

The MHSAA study revealed nearly 43 percent of state prep athletes participated in two or more sports in 2018-19. It also indicated "early and intense sport specialization has become one of the most serious issues related to health and safety at all levels of youth sports, with overuse injuries and burnout among athletes tied to chronic injuries and health-related problems later in life."

The survey found 45.1 percent of boys and 40.4 percent of girls participated in more than one sport.