The next two games will determine the success of the Rams’ postseason.

Lamphere – 22-3 and ranked No. 7 in Division 2 this week – is in the midst of one of the program’s best seasons, as the Rams captured the Macomb Area Conference Gold title outright posting a 13-2 mark. On May 19, Lamphere faced St. Clair Shores Lakeview in the last division game of the season. If Lakeview had won, it would have created a shared title with Lamphere (the teams also shared in 2019). But with one out in the bottom of the seventh inning, Nick Krstich, a junior catcher-third baseman, hit the first pitch he saw for a home run to give Lamphere a 4-3 victory and the outright championship.

“It was probably the greatest moment in my baseball life, and I’ve been playing since I was 8 (years old),” Krstich said. “It took me a few steps to realize it was out. All game they were starting me off with a curveball. They brought in a new guy. He threw a fastball, and it was in my happy zone. As I came around third, all the guys were waiting for me and they all jumped on me as I crossed the plate.”

Rewind another month to April 23, shortly before the start of the league season, when Lamphere played traditional power Detroit Country Day. In a wild affair, junior Aiden McGinnis, a spot starting pitcher who works mainly in relief, came to bat in the bottom of the seventh inning with the score tied at 13-13. McGinnis sent an 0-1 pitch over the left field fence for a 14-13 victory.

“That got us going in the right direction,” Lamphere coach Adam Wooley said. “That was cool. It showed we could play with anybody.”

Wooley is in his 20th season as the program’s head varsity coach and his teams, for the most part, have been competitive. His best were headed by players like Greg Fettes, Ryan Horvath and others a decade ago. In 2010, Lamphere reached the MHSAA Division 2 Regional Finals before losing to eventual champion Dearborn Divine Child. The next season expectations were greater with the return of Fettes and Horvath, but Lamphere lost to Country Day in District play.

“We had seven players who went on to play in college from those teams,” Wooley said. “We have five on this team. We won Districts in 2012 and 2014, and again in 2019. It probably sounds worn out, but I thought we’d be good this year. We had eight starters back (from two years ago) and they had had success. They were anticipating getting back together.

“I’m a lot different coach than I was 10 years ago. I was like a Kirk Gibson then, intense. Now I’m more like a Miguel Cabrera, more laid back.”

Wooley has 16 on his varsity roster, including nine seniors. There are no superstars – just a bunch of good players who pull for each other and have played a lot of baseball together over the years.

Wooley said he and his program hit a downturn for a few years following the 2014 season. Coaching had become a drudgery, not something Wooley looked forward to after teaching class (at Lamphere). Simply put, he got stale.

“I questioned myself,” he said. “It was getting to the point where I was getting frustrated. Then in 2017, I went to an aspiring principal program, as part of my wanting to become an administrator. I had a chance to look at myself. It made me look at my core values. Core values? What are they? I needed to change.”

Wooley redefined his role as a coach. He built his new approach on what he calls the three pillars of his program – trust, commitment and grit.

“The mantra is family,” he said. “We give up so much to be a part of this. You have to understand that we are working toward the same goal. That grit piece? I’m from Madison Heights. No one has succeeded in this town without hard work.”

After last season was cancelled due to COVID-19, Wooley knew there would be a transition period so he intentionally started the season late (April 9) to give his players time to get back to basics. And he’s convinced that extra time spent practicing paid off.

Lamphere’s strengths are hitting, one through nine in the order, and pitching. The players are patient at the plate, and they’re not afraid to fail. 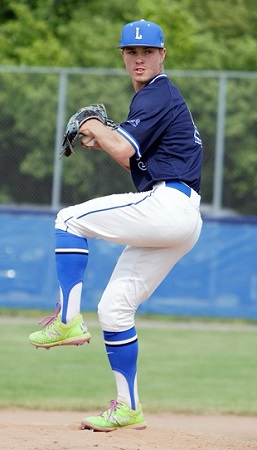 One of Lamphere’s top players is Jake Malak, a pitcher-catcher-outfielder, who will play at St. Clair Community College next season. Malak is batting over .400 and is 4-0 as the team’s No. 2 starter.

And Wooley has the luxury of rotating three catchers on a weekly basis – Chargo, Malak and Krstich.

Malak is one of the leaders and, like Krstich, was a starter on the football team. Malak comes from a family of catchers. His father, Ricky Malak, was a catcher at Madison High. His grandfather, Ronald Malak, also caught and his cousin Billy Malak was a catcher-third baseman on the Madison Heights Bishop Foley teams that claimed a Finals three-peat with Division 3 titles in 2011, 2012 and 2013.

“I love catching,” Jake Malak said. “I like being the leader on the field. I honestly love everything about it. You’re always doing something.”

To stay on top of his game during the cancelled 2020 season, Malak continued to do “something.” He worked with his father one-on-one on catching drills and hitting. Malak also joined a health club nearby to maintain his conditioning.

On Tuesday, Lamphere will play Bloomfield Hills Cranbrook Kingswood in a Division 2 District opener at Orchard Lake St. Mary’s. Cranbrook handed Lamphere its only nonconference loss, 9-4. The winner will play Country Day on June 5 in a District Semifinal. Should Lamphere win, the Rams will likely play the host team, top-ranked St. Mary’s, for the championship that same afternoon.

It’s a daunting task but one the Rams have been preparing for since the start of the season. And should they reach the District Final and play St. Mary’s which, by virtue of its title in 2019, is the reigning Division 2 champion, Lamphere would be a decided underdog.

PHOTOS: (Top) Aiden McGinnis (22) and his Lamphere teammates have had plenty to smile about this spring. (Middle) KJ Whitman makes his move toward the plate Friday against Madison Heights Bishop Foley. (Photos courtesy of Allison Minowa and the Lamphere baseball program.)