EAST LANSING – The moment. The venue. It all got to Beal City’s Keegan Haynes as he took the mound to begin his team’s Division 4 Semifinal against Gaylord St. Mary on Saturday.

Haynes retired the first batter, gave up a base hit and proceeded to throw 10 straight balls walking the bases full before going 2-0 on the fifth batter, Alex Pudvan. Aggies coach Steve Pickens came out to talk to his junior pitcher, settle him down and hopefully instill some confidence.

Haynes threw a strike and then got a bouncer to start a double play, pitcher to home to first. Just like that, the Aggies escaped the top of the first inning unscathed – and that changed everything.

Beal City scored twice in the bottom of the inning and tacked on four more runs in the second on the way to defeating St. Mary 7-3 at McLane Stadium to advance to Saturday’s championship game, which will be its first since 2014.

“That pretty much defined the game for us,” St. Mary coach Matt Nowicki said. “That first (inning) could have been promising for us.”

Instead of scoring a run or more, and perhaps knocking Haynes out of the game, St. Mary was deflated.

Conversely, Beal City got pumped up. Run-scoring singles by Haynes and catcher Cameron Lynch staked Haynes to a 2-0 lead. When the Aggies added four the next inning, keyed by Kollion Sharrar’s two-run triple, Haynes and Beal City were in command.

“I told (Haynes) to trust his defense,” Pickens said. “With that double play, we were only one pitch away from getting out of the inning.

“Hey, that’s a good team over there. We scored a number of runs today with two outs. We’re getting some timely hitting. We were moving the ball. We didn’t strike out much (four times) today.”

St. Mary (26-6) scored all of its runs in the fifth inning, stringing together five consecutive singles to knock Haynes out of the game. That was good and bad news for the Snowbirds. They finally got on the board, but the run also prompted Pickens to bring in his ace. Senior Brett Upton, 11-2 on the season, fanned the first two batters he faced, then got a pop out to shortstop that stranded two runners.

Upton, who threw 23 pitches in retiring all five batters he faced, will be ready to start on the mound in the title game.

Aaron Schafer relieved Upton in the sixth and got the final four outs.

Haynes got credit for the win and he also went 3 for 3 with two RBI.

“The nerves got the best of me in that first inning,” Haynes said. “(Pickens) said to me to throw strikes and calm down. Giving up no runs in the first, that was the best-case scenario. This is the biggest game I’ve ever pitched in.”

For St. Mary, Drew Long went all six innings and pitched well after the first two. Joseph Moeggenberg had two hits and an RBI.

VIDEO: Aaron Schafer scores on a close play at the plate in the fourth inning for Beal City off a single by Ryan Schafer.

Brendan Prime went the first 5 1/3 innings for USA to earn the victory. He survived a shaky start, and when his pitch count ran out, Devin Riskey came to his rescue. Riskey, likely Saturday’s starting pitcher, allowed one hit and struck out two in his 1 2/3 innings of work. 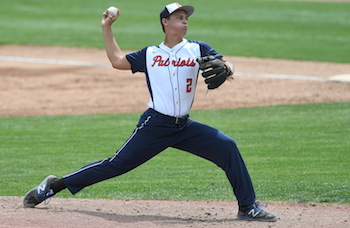 Prime allowed three hits and one run in the first inning, and allowed just one hit after.

“I don’t think I was in a groove yet,” Prime said. “After those four runs, when they got that one, I didn’t think about it much.”

Last season USA scored a bunch of runs early in a Division 4 Semifinal but failed to close out Portland St. Patrick. USA led 7-3 after three innings in that one before St. Patrick came back to win, 12-8, and go on to claim the championship.

“I felt we were going to do well in the tournament in the Districts. We’re not done yet.”

USA batted around in the first inning; the big hit was Braden Carter’s two-run single.

For Lake Michigan Catholic (27-4), starting pitcher Matthew Defay had a triple and scored on Jacob Kissane’s sacrifice fly. Defay gave up all five runs, but only two were earned.

PHOTOS: (Top) A Beal City runner tries to beat a throw to third base during his team’s Semifinal win over Gaylord St. Mary. (Middle) Unionville-Sebewaing’s Brendan Prime delivers a pitch as the Patriots earned a trip to Saturday’s championship game.