EAST LANSING – Portage Northern has made a habit of getting on top of teams early this season.

There’s no secret to that success. The Huskies are just that good at the plate.

“We can all hit,” senior outfielder Tyler Helgeson said. “This is a great lineup, this is a great team, because if one guy is having an off day, you know that the whole team has your back.”

Pretty much everyone in the lineup had a good day Saturday as the Huskies pounded out 12 hits on their way to a 10-4 victory against Rockford in the MHSAA Division 1 Baseball Final at McLane Stadium on the campus of Michigan State University. The title is the first in Northern baseball history.

“It feels surreal – it hasn’t really hit me yet,” Hegelson said. “This is what we’ve all been working toward. This has been our goal for four years now, and to finally accomplish it, it’s very special.”

Saturday’s win was Northern’s 24th over its final 25 games of the season, with its only loss coming against Division 2 finalist Orchard Lake St. Mary’s in the final game of the regular season.

“This group of kids is just phenomenal,” Northern coach Chris Andrews said. “They’ve been a selfless team, they’ve worked like crazy – we do mental conditioning, we practice then they do weight training twice a week, and these guys never complain. They put in all the work, and they play for each other. It’s just awesome.”

It was the second trip to the Finals for the Huskies (39-7), who had finished runner-up in 2015. Several of those players, as well as other alumni, were on hand to watch Andrews lift the trophy for the first time.

“It feels amazing,” senior first baseman Cam French said. “All of us seniors, we came in with a big goal, and we worked our butts off every day. Bringing home the first state title ever definitely feels good, and I feel like everyone knows that we earned it, so I’m happy.” 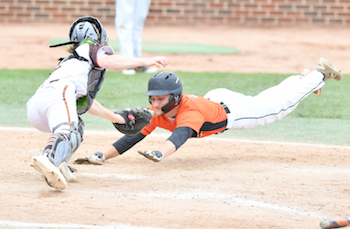 French and Helgeson had the biggest hits for the Huskies, as French drove in two runs during a four-run first inning and Helgeson hit a three-run home run over the wall in right field to highlight a five-run fifth.

They each had three hits on the day, as did Zach Quinn. Nolan McCarthy, Greg Lapetina (RBI) and Gannon Andrews (two RBI) each added one hit, while Parker Brey and Malcom Gaynor each added an RBI.

A balanced lineup has been key for the Huskies all season, as seven players hit above .380 for the year, and that doesn’t include the leadoff hitter Helgeson, who hit .355 with 30 stolen bases and will play at Eastern Michigan University next year.

With four Rockford errors sprinkled in, it was more than enough for Northern to distance itself.

“They hit the ball well, and they put the bat on the ball,” Rockford coach Matt Vriesenga said. “We didn’t make a couple plays, and really when you’re playing against a team like Portage Northern, you have to make plays. They’ve hit the ball all year long. They’re a great team. If we make a couple of those plays, maybe it’s a one-run, two-run game, but they deserved to win.”

Xander Morris was the beneficiary of that run support, picking up the pitching win in a complete-game effort. The sophomore struck out four while allowing seven hits and one earned run.

“Xander Morris, he’s a sophomore, unflappable,” Chris Andrews said. “The kid just throws strikes. He’s got a wipeout curveball, he can throw it over for a strike. He’s an amazing kid. He’s planning on being a Navy SEAL, and with that effort, I wouldn’t doubt it.”

Rockford (28-10) scored two of its runs in the third inning to make the score 5-2 at the time, but never was able to get closer. A solo home run by Zach Schamp in the fifth inning gave the Rams some late life, and they threatened again in the sixth only to have that rally cut short by a Brey throw to the plate from right field to prevent a run and end the inning.

“There’s no quit in them – they battled and they keep battling until the end,” Vriesenga said. “You know they’re not going to take an at-bat off. That’s what we’ve talked about; you might go 0-for-2 with two strikeouts, and the next time up you hit a triple, but you have to keep your head up and you have to stay in the game. A kid like Zach Schamp, to come up in his third at-bat and hit a home run – super proud of him and the rest of the guys.”