The sleepy village of Centreville was even quieter last June 13 when seemingly every resident trekked to East Lansing to watch the Bulldogs’ varsity baseball team take on Muskegon Catholic Central in the MHSAA Division 4 championship game.

“When we were at Michigan State last year, what’s funny is that, we’re in a small town, but the whole small town was at Michigan State,” Centreville coach Mike Webster said. “If you were in Centreville that day, the bank could have been robbed; the grocery store could have been robbed. We had the directors of the MHSAA come up to us and tell us we had the biggest crowd out of anybody — Division 1, 2, 3 or 4 schools.

“That lets you know that this town was waiting for something like that. The support is there and my phone has been off the hook since that day last year. I know we’ll have that fan support and school support. It makes it that much more fun.”

It was a historic run for the Bulldogs last spring, one that included a 29-2 record, a Berrien-Cass-St. Joseph East championship, the program’s first Regional crown and a spot in the penultimate game. The Bulldogs fell to MCC by a score of 10-8 to finish as Division 4 runner-up.

Now there’s only one goal: Win it all.

In order to meet that expectation, the preseason No. 2-ranked team in D4 will have to rely heavily on the right arm of senior pitcher Michael Kool, who had a remarkable 0.97 ERA in 2015. The recent Calvin College commit said, “I just got to trust my stuff like I did last year.”

That’s even easier to do with the gloves supporting him.

“I have to trust my defense behind me,” he added. “I wouldn’t have a below 1.00 ERA without the defensive players behind me.”

Helping Kool pick up the slack on the mound this season will be junior Coletin Gascho, who posted a very impressive 1.57 ERA as the team’s third pitcher in 2015. Senior Jake Milliman will provide depth on the mound for the Bulldogs, as will sophomore Andrew Stevens.

The Bulldogs’ offense, which posted a .312 team batting average and a .433 on-base percentage in 2015, brings back six of its top seven hitters from a year ago. Seniors Jalen Brown and Nick Kelley are among those returners looking to improve upon an offense that didn’t produce great power numbers last year but was still effective from top to bottom.

Brown, who went on a tear during the playoffs, finished 2015 with a .430 batting average.

Kelley, a rare strikeout victim in 2015, posted an eye-opening .560 on-base percentage during the regular season to go along with a strong .396 batting average. Kool also will look to provide some offense in 2016 just as he did in 2015, when he led the team in home runs (two). 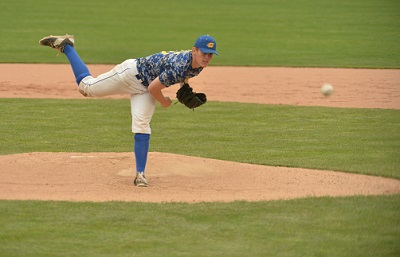 “I think we’re all hungry to get back to the state championship and finish the job this time,” Kool said.

Centreville returns almost all of its key defenders to this year’s roster. Kelley, who along with Kool will make up one of the most successful and experienced batteries around the state, will anchor the defense from behind the plate.

Sophomore centerfielder Nick Webber is a major asset with a year of experience under his belt.  Junior shortstop Brady Reynolds is just as invaluable.

“He’s (Reynolds) a very energetic kid, a very quick kid, and he’s a natural baseball player,” Brown said in describing why his teammate was the best defender on the Bulldogs’ roster.

This veteran group knows, however, this spring will be quite different being chased instead of being the pursuant.

“We have always had a very competitive conference,” Webster said. “With the returning players we will be having, we expect teams to not overlook us.”