EAST LANSING – No one knows better how good of a pitcher Andrew Manier is than Sterling Heights Parkway Christian catcher Alex Julio.

“He was something special today,” Julio said. “He’s a good pitcher, and has been. But today he was special.”

Manier didn’t allow a hit until there was one out in the fourth inning, and the senior lefthander went the distance as Parkway Christian defeated reigning runner-up Centreville, 5-1, in a Division 4 Semifinal on Friday at McLane Stadium on Michigan State University’s campus.

Neither school has won an MHSAA title in the sport.

Manier was never in serious trouble Friday. Parkway Christian scored four runs in the top of the first inning, and Manier did the rest. He walked two and struck out four, and the only inning he allowed two batters to reach base safely was the seventh when Centreville scored its run.

“In a big game like this you have to step up, calm your nerves,” Manier said. “I had two walks but I had great fielding behind me. The curve was working well. You have to keep the hitters off balance. I love the responsibility.”

The first inning gave Parkway Christian the 4-0 lead and momentum. Montana Essian executed a suicide squeeze that scored Manier, who doubled, for the first run. Julio followed with an RBI single and Jacob Bambrick had a two-run single.

Julio had another RBI when he was hit by a pitch with the bases loaded in the seventh inning.

Collin Kirby had an RBI single for Centreville (28-4).

The Bulldogs started Coletin Gascho on the mound but he lasted just one inning. Coach Mike Webster went with Alex Meyer for the final six.

Webster said Manier was one of the best pitchers his team had faced this season.

“He’s definitely top three,” Webster said. “He’s a competitive kid. That was the most talented team we’ve faced all year.”

Parkway Christian coach Rick Koch said this Semifinal victory was something that had been building for the past three years. The Eagles lost in the Quarterfinals in 2014 and reached a Regional Final last season.

“We thought we had the potential all three years,” he said. “We play for one run per inning. We know our pitching is solid. It is nice to get those four (runs). It helps to get the butterflies out.”

St. Patrick coach Bryan Scheurer went against conventional thinking and went with a freshman, and not his senior ace, in Friday’s Semifinal against Gaylord St. Mary.

Nathan Lehnert made his second cousin look like a genius, as Lehnert went six innings and allowed five hits, all singles, and walked only two. 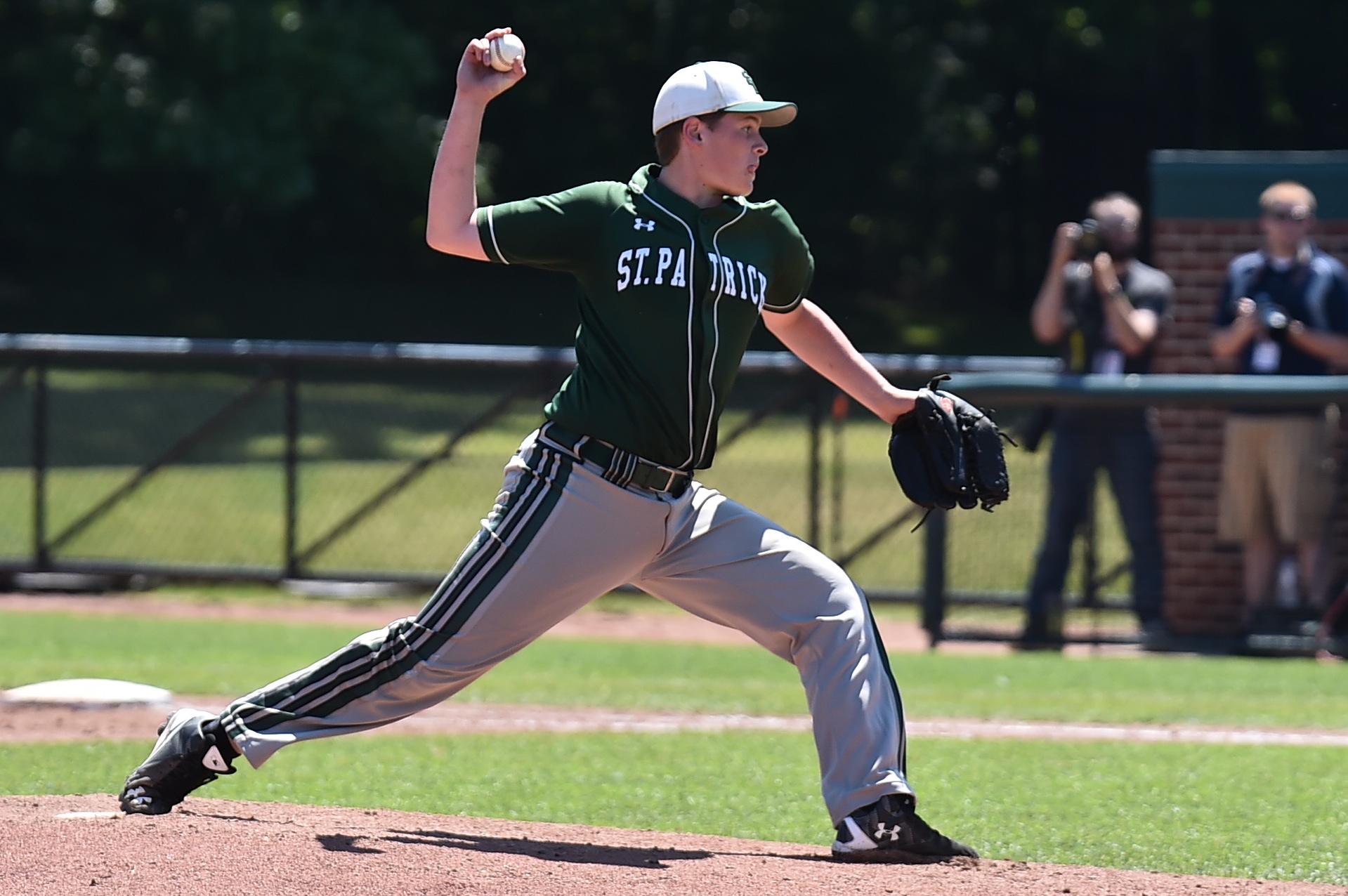 And Scheurer will start Travis Moyer against Parkway Christian. The Eagles are also expected to go with their ace, Riley McManus, in the final.

Moyer relieved Lehnert, walked the first batter and retired the next three in order.

“All he’s done as a freshman is to go 8-0 with an ERA of 1.00,” Scheurer said of Lehnert. “Some people say that was taking a risk. I don’t see it that way. To bring Travis back twice after three days’ rest was too much.”

“I talked to Travis and he said he was sore,” Scheurer said. “He said he’d go, but I looked at his body language.”

Dan Mackowiak’s bunt single scored Brendan Schrauben to give St. Patrick a 1-0 lead in the top of the first inning.

St. Mary (31-6) loaded the bases with one out in the second before Lehnert struck out John Paul Zeilinski and got Ethan Szymanski to bounce into a fielder’s choice to end the threat.

The Snowbirds also loaded the bases the next inning but couldn’t come through with a two-out hit. Adam Nowicki reached base on an error to start the inning, and when Mackowiak made a diving catch of Nicholas Torsky’s line drive in the next at-bat, the momentum stayed with the Shamrocks.

St. Patrick added a run in the fifth, and St. Mary left the bases loaded again in the sixth to end Lehnert’s day.

“We just went at it as any other game,” Lehnert said. “Our game is revolved around small ball.

“Nervous? Yes. When we started to make plays, I wasn’t so nervous.”

Torsky pitched well for St. Mary as he also gave up five singles and he walked three.

“We hit some hard balls,” St. Mary coach Matt Nowicki said. “And they made some great plays. That’s baseball.”

PHOTOS: (Top) Parkway Christian’s Andrew Manier prepares to unload a pitch during Friday’s Semifinal win over Centreville. (Middle) St. Patrick’s Nathan Lehnert makes his way toward the plate while pitching the Shamrocks to the Division 4 Final.