If you would have told Brown before a Division 3 Semifinal against Pewamo-Westphalia that his team would have gotten four hits, committed three errors and his four seniors would’ve gone 0-for-12 with seven strikeouts, he wouldn’t have thought they would be coming back to McLane Stadium on Saturday.

But somehow, some way, Edison got it done, advancing to its first championship game with a 3-2 win over the Pirates.

The Pioneers (25-12) prevailed through a combination of clutch pitching, clutch hitting and taking advantage of P-W miscues.

Pewamo-Westphalia loaded the bases in the third inning, but Matthews got out of it with a strikeout. He also stranded a runner at third base in the fourth inning and another at second base in the fifth inning before pitching a 1-2-3 sixth.

“I feel it was a great choice to put me on the mound,” Matthews said. “I felt like nobody could do it better than me. I was trying to work on the outside corners, inside, change-ups low in the dirt and curve balls. Just a mixture of things.”

At 99 pitches to start the top of the seventh, Matthews was pulled in favor of senior Greg Pace, who got the first two outs before a hit batter, wild pitch and walk put runners at first and third.

But Pace induced a weak groundout to first to end the game.

“I’m just trying to throw strikes at that point,” Pace said. “It was a relief. I knew I could trust anybody the ball was hit at.”

Matthews also had two hits to lead the limited offensive production for Edison.

Senior Tanner Wirth and junior Trent Channell each had two hits to lead Pewamo-Westphalia (23-11-2), which also committed three critical errors and a couple of baserunning mistakes that halted rallies.

“Sometimes the results don’t necessarily match the results,” Pewamo-Westphalia head coach Curt Nurenberg said. “But you keep on pushing on and moving on. I thought they did a great job.”

Edison opened the scoring in the bottom of the second inning with two runs. After Matthews reached on an infield single, he stole second and took third when the throw went into centerfield. Matthews then scored on an infield error.

Following a wild pitch that put another runner in scoring position, Edison took a 2-0 lead on an RBI single with two outs by sophomore Deshaun Williams.

The Pirates cut Edison’s lead to 2-1 in the fourth inning on an RBI single by Channell, but Matthews stranded the potential tying run on third base.

Edison then got the run back in its half of the fourth on an RBI single up the middle by sophomore Kole Waterman, again with two outs.

After putting runners on second and first with one out in the fifth inning, Pewamo-Westphalia made it 3-2 on a fielder’s choice groundout when a throw to first to complete a double play got by the Edison first baseman.

Up until Buchanan senior Matt Hoover stepped to the plate in the top of the eighth inning, it had been a pile of frustration for the Bucks in the second Division 3 Semifinal.

Buchanan had gone 0-for-11 with runners in scoring position when Hoover took his turn with a runner on second base and one out in a 1-1 game.

“All week, I was hitting high curve balls off the machine over and over again, just seeing the spin at the top of the zone, not trying to do too much and put it in right-center” Hoover said. “I did that all week, and finally got my one in the right spot.” 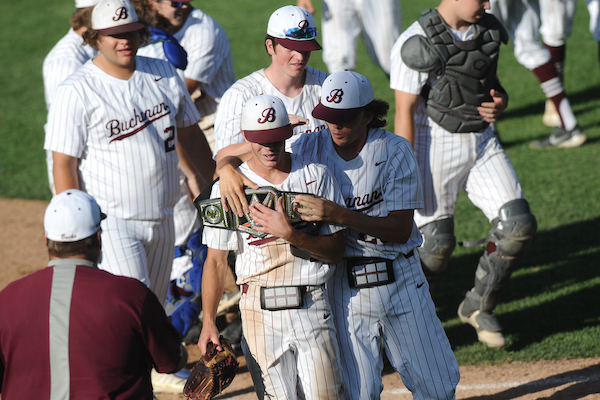 Indeed, just as he did in batting practice, Hoover laced an RBI single to right-center to score junior teammate Cade Preissing and give Buchanan a 2-1 lead.

As it turned out, it also burst a dam for the Bucks, who went on to score five runs total in the inning and earn a return trip to McLane.

The win also earned some redemption for Buchanan (28-4), which was shut out in a Semifinal last year by Grosse Pointe Woods University Liggett.

“Our kids have been on a quest from Day 1,” Buchanan coach Jim Brawley said. “They’ve only wanted to get back here. Last weekend, we didn’t even care about the Regional trophy. Their goal was to get to the championship game.”

Following Hoover’s hit, senior Macoy West sent a two-run triple to center and sophomore Nick Finn added an RBI single to give Buchanan a 5-1 lead. A sixth run scored on a wild pitch.

With Hoover, the team’s ace, at 25 pitches after coming on to relieve starter Drew Glavin in the sixth inning, Buchanan elected to re-insert Glavin in the eighth to finish the game and preserve Hoover for the Final.

The matchup was a pitchers’ duel between Standish-Sterling senior Chase Raymond and Glavin for the first five innings, with neither allowing a run.

Raymond pitched a scoreless sixth, and then Standish-Sterling broke the tie in its half of the inning.

With one out, Raymond dumped a blooper over the second baseman’s head to score senior teammate Cole Prout and give Standish-Sterling a 1-0 lead.

Buchanan answered in the top of the seventh, putting runners on second and third with nobody out after a single by senior Murphy Wegner and a double by West. The Bucks tied the game at 1-1 when Wegner was safe at home on a fielder’s choice groundout.

However, it could’ve been a lot worse for Standish-Sterling.

With runners again on second and third and nobody out, Raymond got out of the jam via a popup, fielder’s choice groundout and a strikeout to keep the game tied.