The Shamrocks committed four errors over the first four innings of their Division 4 Semifinal and trailed Unionville-Sebewaing 8-4.

That wasn’t working. In addition to the errors, St. Patrick issued three walks.

“We weren’t playing well,” Scheurer said. “Another one of our mottos is, losing is not acceptable. We’re going to chip away, grind away.

The Shamrocks scored four runs in the fifth inning to tie the game and pushed across four more in the seventh to defeat USA, 12-8, on Friday at Michigan State’s McLane Stadium.

Hudson, which had never won a Regional title until this season, trailed Gaylord St. Mary, 2-1, after four innings and then scored two in the fifth and added three in the sixth to take a 6-2 lead on the way to achieving another program first.

St. Patrick had two triples in the fifth inning of its win. Freshman Devin Fedewa’s two-run triple was the key hit.

Graham Smith then started the seventh with a walk, and the bases were loaded with one out after an error and a hit batsman. Dan Mackowiak batted in what proved to be the winning run with a sacrifice fly to center. Nathan Lehnert and Scheurer’s nephew, Brandon Scheurer, had RBI singles, and another run scored on a well-executed double steal.

St. Patrick trailed Bay City All Saints 3-0 and 6-4 in a Regional Final before coming back to win, 7-6. Brandon Scheuer said his team has come back a number of times this season, so the fact the Shamrocks were trailing again didn’t faze them.

“We’ve seen games like that before,” he said. “We try not to hit doubles and home runs. We want to hit singles. We play small ball. We’re good at it. Apparently, they are, too.”

USA (30-8-1) batted around in the third inning and scored four runs to take a 7-3 lead. Scheurer came on in relief in that inning, and though he gave up three of the four runs, he settled down and allowed just two hits and no runs over the final three innings to receive credit for the victory.

Scheurer had four hits, and four of his teammates had two including Brendan Schrauben, Lehnert and Fedewa, all of whom had two RBI.

St. Patrick had 15 hits to nine for USA. Cooper Kauffold had three hits and three RBI for the Patriots.

“That was a heck of a game when you think about all of the back-and-forth play,” USA coach Tyler Bader said. “I told our players you’ve got to use this as a springboard. Not having experience here can add up.”

USA was playing to reach an MHSAA Final for the first time.

Jesse Hesistan went the first six innings for Hudson before filling the bases with no outs in the seventh. Coach Jeremy Beal brought in Garrett Gamble from third base and switched Hesistan to third.

The move worked. Drew Koenig hit a grounder to Hesistan, who stepped on the bag and threw to first to complete the double play. Though a run scored, Hudson got what it wanted. 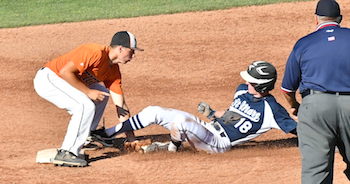 “I was nervous,” Gamble said. “Pitching in relief is never easy. You just have to get it done. You prep for this.”

Brady Hunter singled in St. Mary’s fourth run, but Gamble got the last out on a fly out to center.

“(Hesistan) had enough pitches left to finish,” Beal said. “He was staring at getting us to the Final. That double play was just like we drew it up.”

“We needed to score some runs,” St. Mary coach Matt Nowicki said. “When you get in a hole like that, it’s tough. It would have been nice to take that next step.”

Nick Torsky went the distance for St. Mary (29-8), and Joseph Moeggenberg went 3-3 at the plate.