Heavy downpours earlier in the week, combined with all-night rain on Friday, meant the title games in both baseball and softball were postponed from Saturday, June 19 to the following Monday.

Colon grabbed a 2-1 advantage in the third inning and had multiple opportunities to up its lead, loading the bases in both the fourth and again in the top of the sixth innings. But the Magi were unable to capitalize. In the bottom of the sixth with one out, Mesick’s Monty Geiger ripped an opposite-field double within inches of the rightfield foul line, scoring Chuck Hockey to knot the game at 2-2, setting the stage for a thrilling finish. 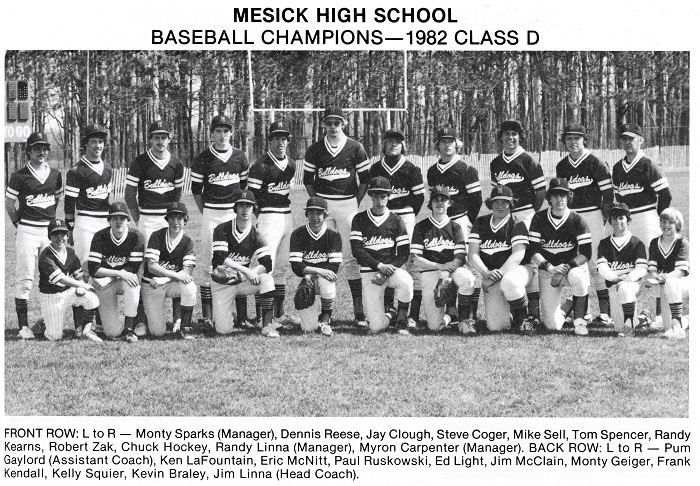 In the seventh, with Mesick runners at second and third and nobody out, Colon coach Mike Sowles ordered an intentional walk to Bulldogs star Frank Kendall. With the bases loaded, a grounder to short was tossed to home plate for the inning’s first out. Another near-identical shot, again to the shortstop, followed. The throw to the plate was accurate and beat the sliding runner, Ken LeFountain. However, the umpire ruled the catcher had been pulled off the plate by the throw, allowing Mesick to score the game winner.

“Our clutch hitting didn’t come through for the first time in a long time,” said Sowles to the Battle Creek Enquirer. His team had stranded 13 runners on the morning. “We just didn’t get the key hits to put them away.”

"Most observers in the press box located directly behind home plate, thought the umpire was right,” stated Steve Morse, staff writer at the Enquirer, who had covered the game.

While Sowles disagreed with the game-ending call, he added, “You’ve got to give credit to Mesick. They pitched out of those jams time and time again.”

Also named all-state in football and basketball, Sanford Meridian’s Ron Fillmore doubled off the centerfield fence, then scored what proved to be the winning run in the fifth inning following a two-out single by catcher Brian Garner as the Mustangs downed Buchanan 6-4 to earn the Class C baseball crown. It was the second consecutive runner-up finish for the Bucks, who finished the year at 25-6.

Beaten only once, at a tournament during the regular season by eventual Class A champion Midland, Sanford Meridian (29-1) banged out 13 hits and opened the scoring in the top of the first when Dave Ehlert scored on a double steal. The Mustangs then added runs in the second, and a pair in the third inning, for a 4-1 lead.

Buchanan knotted the game in the fourth inning.

Fillmore, who was headed back to Central Michigan University in the fall on a football scholarship, tripled, scored twice, and added an RBI on the day. Garner drove in three runs on a double and a pair of singles, while Jim Bailey and Kirk Shauger also added two singles. The Mustangs had added an insurance run in the sixth following a Dennis Ladlow sacrifice fly.

“Fillmore concluded an outstanding athletic career at Sanford-Meridian with his performance in the title contest,” wrote Jack Walkden in the St. Joseph Herald-Palladium. “Three times he bailed starter Dave Walter (12-0) out of tight jams. And the senior righthander closed out the game with a flourish striking out Buchanan’s 1-2-3 batters. He worked 2 2/3 innings in all, yielding no runs, no hits, striking out five, and walking just two.”

“Sanford-Meridian got some other good news Monday,” added Walkden. “The baseball program had been dropped for 1983 as part of budget cuts at the school.

“‘But it’s about 80 percent sure that it will be reinstated through outside funding,’ Sanford-Meridian Athletic Director Steve Digsby said.”

Bob Podschline drove home the tying run with a two-run double in the Class B contest, scored the winning run on a Carl Novick two-run double in the third inning, then racked up 10 strikeouts as Southgate Aquinas topped Bay City Handy, 6-2. The Raiders southpaw allowed just two hits across six innings. Novak added a fifth-inning home run, and Gary Lizanich tossed a hitless seventh to seal the win. Aquinas ended the season with a 22-10 mark, while Handy closed out the year 30-9.

In the day’s final contest, Midland’s Chemics downed Plymouth Canton, 5-4, in Class A. Rick Leppien smacked a 385-foot two-run homer over the left-centerfield fence in the top of the second inning to open the scoring. It was his eighth round-tripper of the year. He scored again on a double steal to up the score to 3-0 in the fourth.

“The Chemics increased their lead to 5-0 with two more runs in the top of the fifth,” stated Don Winger in the Midland Daily News. “Bryan Kuehne doubled, moved to third on a ground out by Chris Carter, and scored when (Canton) shortstop Don Dombey threw wild to first on Mark Sayad’s grounder. Sayad raced all the way to third on the play and pitcher (Greg) Money promptly doubled him home.”

Victory, however, would not come easy.

Leppien, the ace of the Midland pitching staff with a 16-1 record, was limited to a relief role in the championship contest because of a “30 outs rule in effect for the semifinal and final games.” Hence, Midland coach Frank Altimore was forced into juggling pitching duties across four members of the staff.

A series of walks, a passed ball, and a timely single – Canton’s lone hit on the day – cut the margin to 5-3 in the fifth inning. Additional issues in the sixth led to another run, setting the stage for an exciting finish. 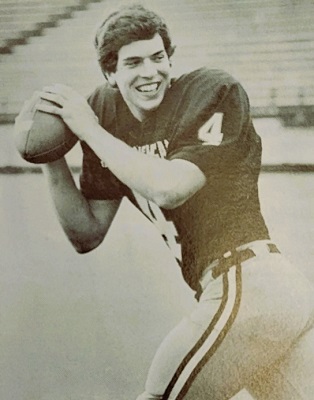 In the bottom of the seventh, Altimore moved pitchers in and out like chess pieces. The Chiefs had the winning run at third base when Money returned to the mound for the fourth time, and “blew a 3-2 pitch” past Canton’s batter to end the game for the final out.

“It was dark, and I told them to just come in with heat. They did, and we won. It was a great ballgame,” said Altimore.

Moments later, “a heavy downpour inundated the playing field,” concluded Winger. “But, by that time the Chemics were celebrating their second state title in 10 years, and they were oblivious to the raindrops.”

Money, the starter, was credited with both the win and the save for Midland, which finished with a 35-5 mark. Canton ended the season at 25-5.

“They were on a vision quest,” their coach would recall in 2007 when the team was honored with induction into the Midland County Sports Hall of Fame.  “We had an incredibly talented team in 1981, senior-loaded. They went to the regional finals, where they got beat by a very poor team from Jackson with a great pitcher.”

Three one-run games kept softball fans on the edge of their seats at Lansing’s Ranney Park.

The Irish, focused on aggressive baserunning, stole 10 bases and took advantage of six errors by the young Gaylord squad. Up 2-0 after the first, and 4-2 after three innings, Gabriel Richard pushed across four more runs in the fourth. The Irish ended the campaign with a 30-6 mark, with O’Sullivan finishing her senior year with 16 wins against four defeats.

“New Lothrop’s first batter of the game, Kelly Fisher, crossed the plate with the game’s only score,” stated Bill Khan of the Flint Journal in his article covering the Hornets’ 1-0 win over Pontiac Catholic in the Class C Final. According to Khan, the “lone run couldn’t have been planned much better.

“Fisher led off the Hornets’ half of the first inning with a walk, then proceeded to swipe her 71st base of the season.”

The thefts marked the top season total recorded in Michigan, as well as the nation, at the time.

Fisher advanced to third on a groundout. A squeeze that went back to the mound initially held her at third, but the toss by the pitcher to first for the out opened an opportunity.

“… Fisher came streaking down the line and made a headfirst slide into home,” just under the tag of the relay to the plate, scoring the game’s only run.

Pontiac Catholic junior Vicki Morrow, who would later earn the Big Ten Softball Player of the Year honor at the University of Michigan in 1987 and was later selected to the Big Ten All-Decade Team, struck out five and allowed only four hits, while New Lothrop pitcher Sandy Deneen limited Pontiac’s offense to just five scattered hits and two walks across seven innings. New Lothrop ended the year with a 29-4 record, while the Titans finished at 30-3. 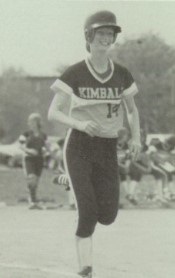 Ogemaw Heights held a 2-0 lead entering the seventh, but a pair of runs in the bottom of the inning by the Bulldogs pushed the game to extra innings. It was the third straight “cliffhanger” for Chelsea, which ended the year with an impressive 33-2 record – tops in school history.

“In the regional final, they scored four runs with two outs in the seventh inning to trip Dearborn Divine Child, 4-2,” according to Rob Allstetter of the Ann Arbor News, “and they needed an Unterbrink double in the bottom of the eighth inning to turn back Richmond in the semifinals, 4-3.”

A leadoff single in the seventh was the only hit allowed by Bishop, who upped her career mark to 46-5 with the win.

Kimball’s Lisa Bean, who had walked earlier in the inning, scored the game’s only run in the third when Mary Pike smashed a two-out double over the left fielder’s head. It was one of only two hits allowed by VanDerMolen.