GRANDVILLE – Spencer Verburg understands his position on the baseball diamond isn’t the most glamorous.

It doesn’t bother the Grandville senior standout one bit.

In fact, he takes pride in his role as one of the top catchers in the Grand Rapids area.

“I like to do the dirty work,” said the 6-foot-2, 200-pound Verburg, who recently signed with Central Michigan University. “Not many people want to do that, and everyone wants to be a shortstop or center fielder where you look cool and get the girls.

“I feel like a team can't take it to the next level without a dude behind the plate that is willing to block and get down and dirty to help the pitchers look pretty.”

Verburg is a defensive stalwart who embraces the opportunity to help his pitching staff.

“I like receiving because I’m able to stick pitches that other catchers would drag out of the zone,” Verburg said. “It’s such a confidence booster when you stick and steal one and it can change the whole game because your pitcher gains the confidence he needs and then he starts rolling.

“I’ve always focused on defense because it's hard to find good catchers out there. I feel like so many people have focused on hitting, so I focused on catching where I knew not as many people would focus on.” 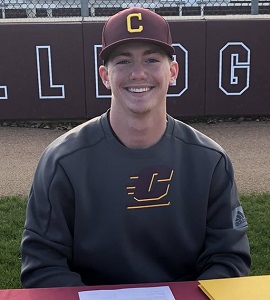 Verburg’s prowess and maturity was on display in Grandville’s first tournament of the season last weekend.

Bulldogs head coach Matt Cook was impressed by Verburg’s ability to block out his offensive struggles and remain focused on his catching duties.

Verburg is thrilled to be back on the field with his teammates after the pandemic wiped out his junior season.

Last year was a challenging time for all spring sports athletes in the state.

“It hit hard because baseball is such a big part of my life,” Verburg said. “I didn’t get to play with my teammates and see them every day. There weren’t any places to work out or throw or hit because so many places were shut down because of COVID.”

The Bulldogs had just wrapped up tryouts before they found out the season would be put on pause. It eventually turned into a cancellation.

“There was no way I thought they were going to cancel the season, and we thought we would just wait it out for a couple weeks,” Verburg said. “It felt like it dragged out, and eventually we sensed that we wouldn’t be playing at all.”

Verburg had mixed emotions because he knew he had another year of high school baseball.

On the other hand, he knew that wouldn’t be the same for his senior teammates.

“I felt really bad because I’ve been playing with those guys since I was a freshman, and I’ve been through so much with those guys,” he said. “It was hard to not be able to go out and play that last season with them and know they were not going to enjoy senior night and everything else.”

“It was heartbreaking for everyone around the state and the country,” Cook added. “Guys like Spencer and others who had been waiting in the wings and they knew they were going to be day-one starters and play every single inning. And then for the season to get canceled ... I know it was really tough on those guys.”

Cook saw a noticeable difference in his players’ preparation upon learning of their return this spring.

“They have been so locked in this year, and I think a lot of it is because they lost a year and are not taking anything for granted,” Cook said. “We’ve had our best practices so far this year than we’ve had in my four years here. 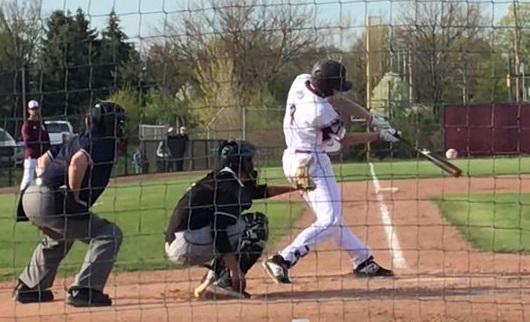 “Guys are more locked in because of that missed year. They don’t take practice for granted, and they want to be there.”

Verburg feels blessed to have the opportunity to play in his final season.

“I’m so thankful because last year it was obvious to everyone that things can be taken away so fast,” Verburg said. “This is the first year I’ve been able to play with all the guys I grew up with since kindergarten. It’s nice to go out and play the game that we love together and just have fun doing it.”

Verburg has been on the varsity since he was a freshman. As a sophomore, he spent time playing behind then-senior Jake Paganelli.

The following offseason, playing with his Diamonds travel team, Verburg began to show promise at the plate.

The combination of defense and hitting helped him earn interest from college scouts.

Verburg fit in right away as an incoming freshman on varsity.

“He was business-like then, and had goals early,” Cook said. “We recognized him as a kid that was only going to work and work and work, It’s rare when you find a freshman that carries himself the way he did. He carried himself like an upperclassman.”

The Bulldogs possess a lot of potential this year after winning 24 games in 2019.

“I think we’re being slept on, but we're scrappy,” Verburg said. “I  think we can make a deep run in the tournament.”

PHOTOS: (Top) Grandville catcher Spencer Verburg gets ready for another inning behind the plate during his team’s doubleheader against Grand Ledge earlier this month. (Middle) Verburg signs with Central Michigan in November. (Below) The then-sophomore drives a pitch for the varsity in 2019. (Photos courtesy of the Verburg family and Grandville baseball program.)