EAST LANSING – Stephen Kwapis is headed off to Notre Dame next season to play baseball at his dream school.

“It’s unreal,” said a wide-eyed and giddy Kwapis, who went 2-for-4 with two runs scored and an RBI.

“I’ve been dreaming about this for my whole life, and for it to actually happen ... it hasn’t hit me yet, honestly. I can’t believe that just happened.”

It was the first Finals win in school history for Hackett baseball, which reached the championship game for the first time.

Hackett (31-9) scored at least one run in each of the first four innings and received stellar pitching from senior Sam Shea and junior reliever Brenden Collins.

“It’s surreal to watch these boys accomplish this,” Irish first-year coach Smiley Verduzco said. “They worked so hard, and it’s all about the boys. We’ve had some really tough games, and this was a really good baseball team that we beat. To be able to do this is very special for these young men.”

Shea and Collins combined to limit Mooney to only four hits while striking out seven.

“They’ve been good all year, and to step on this stage and to come through like that is very special,” Verduzco said. 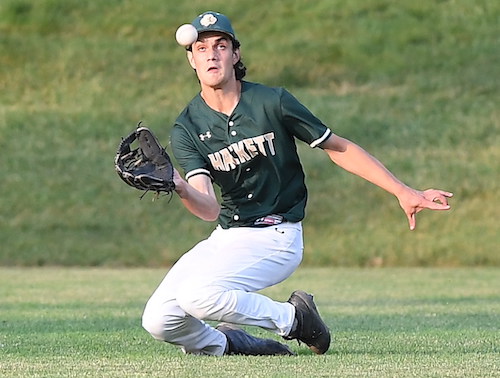 Shea wasn’t slated to pitch in the Final after starting the Semifinal. However, the lineup’s big first inning Friday against Glen Lake allowed him to return after throwing only 23 pitches.

“I’m thankful that I was able to pitch in the last game because I didn’t think that would happen,” Shea said. “It was unbelievable to pitch in the championship game, and it was super important to get those early runs so we could calm down and play our usual baseball.”

Kwapis had a strong belief in his team’s ability to make a postseason run. He said it was apparent early due to the tight-knit bond.

“I knew the brotherhood that this team had, and that’s what made this team so special,” he said. “We all came together at the beginning of the year, and I just knew by the way we played that we could make it happen.”

Hackett’s bats were pivotal throughout the tournament, scoring 71 runs over its seven postseason games.

Isaac Backman also had two hits for Hackett, while Eli Backman and Steven Widger each had a hit and two RBI.

The Irish went ahead 2-0 in the first inning after a Kwapis RBI single and sacrifice fly from Shea.

They extended their lead to 8-1 after four innings.

“They came out hacking,” Mooney coach Mike Rice said. “They were hitting the ball, and we haven’t been squared up like that in a while. We tried our best and gave it our all, but at the end of the day they out-hit us and we made some defensive mistakes.”

Mooney, also making its first Final appearance, committed four errors on the day and left 10 runners on base.

The Cardinals ended the season with a 28-7 overall record.