Baseball has always been a big part of Bob Andrezejewski’s life.

“I was one of those guys that would sneak a radio in his bed when he was younger to listen to the Tiger ballgame,” Andrezejewski said. “This was back when I was 8, 9, 10-years old. I’ve always been a big baseball fan.”

Half a century later, the enthusiasm for the game is still there for the Saginaw Heritage skipper, who recently became the fourth baseball coach in state history to reach 1,000 career wins.

“I haven’t really tried to stay in coaching to try and get a certain number,” said Andrezejewski, who began his career in Bridgeport in 1970 before coming to Saginaw Heritage in 1996. “There are more positives than any kind of negative that comes up with coaching. Even though I’ve been coaching for a long time, every year is a new year. There are new players, a new direction – that’s just part of the challenge, and it’s exciting.”

Win No. 1,000 came on April 22, when the Hawks – who are now 11-2 on the season – defeated Beal City 12-3 in the Midland Dow Tournament. He entered the season with a 996-440 career record, and joins Pat O’Keefe of Grand Ledge, Larry Tuttle of Blissfield and Frank Sumbera of Grosse Pointe North in the state’s 1,000-win club.

While Andrezejewski said he hasn’t taken the time to think about reaching the milestone, his players certainly knew it was coming up and were excited to be part of the team that helped their coach reach it.

“It’s an honor to be part of the team that got that win for him, but I pitched in that game, so it was even more memorable for me to be able to contribute like that,” Heritage senior Brendan Jackson said. “To do it in that fashion, it really made it even more special.”

Andrezejewski was born and raised in Saginaw and attended Saginaw Arthur Hill High School, where he played football, basketball and baseball. He attended Central Michigan University before coming back to the Saginaw area and joining the Bridgeport baseball coaching staff as the junior varsity coach in 1970. He stayed in that position for three seasons before taking over the varsity position.

“Then I took a year off – I wanted to concentrate more on my family,” he said. “I took a year off, and the opportunity came and they wanted me to try out for the head baseball job in Heritage, since I lived in the community. I said, ‘OK, I’ll do that for a year or so.’” 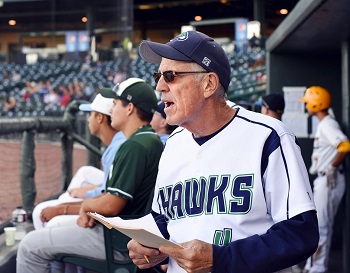 “He’s definitely an old school guy, but in a good way,” Jackson said. “He’s a great leader, and he’s able to motivate his players to get things done, as you can see. He’s able to connect with his players.”

During a career that has spanned more than 40 years, Andrezejewski has plenty of special memories, but didn’t want to single any out as favorites. Instead, he said, it’s the relationships he’s made at both schools that really stick out to him. He still communicates with players he coached in the 1970s, and it’s things like that which stand out more than championships.

Perhaps that’s why Andrezejewski’s rallying cry isn’t to go out and win the game, but to go out and play your best. It’s something that has stuck with his players.

“He doesn’t care about winning or losing, he cares about us going out and playing our hardest,” Heritage senior outfielder and pitcher Noah Marcoux said. “He just wants us to go out and give it our best, and winning or losing, that will come.”

It’s a message that has resonated generation after generation for Andrezejewski. So even though he’s coached through five different decades, he’s still reaching and motivating his players.

“I’m a firm believer that baseball is really a timeless sport, and being able to connect through that is really the key to getting your guys fired up and ready to go,” Jackson said. “He has so much baseball wisdom with the experiences he’s had and the teams he’s coached, you can’t not give the guy respect. And even beside that, he’s just a great guy.”

PHOTOS: (Top) Heritage coach Bob Andrezejewski reached 1,000 wins as a high school baseball coach April 22; here he instructs Devin Sutter before his at bat against Flint Carman-Ainsworth on April 24. (Middle) Andrezejewski was selected to be part of the coaching staff for the first North/South Baseball Classic with high school players from Bay City and Saginaw taking on players from Flint on July 15, 2015, at Dow Diamond. (Photos by Lamont Lenar/Township View).