EAST LANSING – Stevensville Lakeshore trailed 1-0 and did not have a hit until leadoff batter Ryan Remus stepped to the plate to open the bottom of the third inning of Thursday’s Division 2 Semifinal against Chelsea.

That’s when the game changed. Remus singled, went to second on a balk and with a head-first slide scored the tying run – swinging the momentum clearly toward the Lancers.

Lakeshore went on to score four runs in that inning and defeat Chelsea 7-1 at Michigan State’s McLane Stadium.

Lakeshore (35-6), headed to a Final for the first time since 1990 when it won the Class B title, will play Bay City John Glenn for the championship at 11:30 a.m. Saturday. Glenn will make its second Final appearance in search of its first MHSAA title.

Glenn (34-8) hammered Dearborn Divine Child, 15-4, in the second Semifinal, with 15 hits and a seven-run second inning to set the tone.

Cal Barrett homered with two outs in the first Semifinal to stake Chelsea to a 1-0 lead. The Bulldogs allowed three walks over the first two innings, but Remus’ at bat helped turn the game around. Standing on second after the balk, Remus got a good jump on Trey Thibeault’s line drive single to right center. Hunter Neff’s throw to Barrett seemed to beat Remus to the plate, but the senior second baseman alluded the tag with his slide.

Tyler Mojsiejenko followed with another single to center, and when the ball got past Neff, Thibeault scored for a 2-1 lead. Starting pitcher Connor Brawley tripled to score the third run, and Brawley came home on Max Gaishin’s sacrifice fly.

From there Brawley held Chelsea (31-10) to two hits over the final four innings, and the junior lefthander finished with a complete game five-hitter. He walked none and struck out five.

Remus said he didn’t notice the balk, but was aware that he started something big.

“I was just trying to get myself a good lead,” he said. “I didn’t look to see the throw (from center). I trusted my on-deck hitter (Brawley). He knew when it was coming and gave me the (slide) sign. After that we started hitting the ball hard and finding holes.”

Chelsea coach Adam Taylor didn’t think those four runs changed the momentum. He said his team had come back from greater deficits and was confident they’d do it again.

“The difference was their starter,” Taylor said. “He threw all three pitches for strikes, and in high school that works. Get it and go.

“When people scored on us throughout the year, we did a good job of coming back. It goes back to what I said. Their pitcher was the difference.”

Lakeshore had nine hits, and Mojsiejenko (with three) was the only batter with more than one.

“That balk kind of loosened us up,” Lakeshore coach Mark Nate said. “Sometimes it takes us awhile. That slide was big. Credit my third base coach (Matt Cotton) for that.”

John Glenn had four hits in the second inning, and add in three Divine Child errors and the Bobcats had a big, early lead. 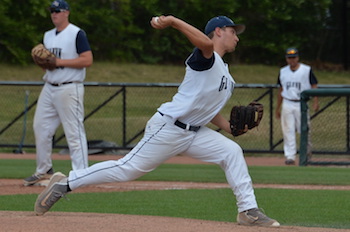 “They had us for three (errors), and it could have been four,” Divine Child coach Dan Deegan said. “They teed off on every one of our pitchers.”

Brad Mularz went all five innings and allowed five hits for the Bobcats. Getting those seven quick runs made his job that much easier.

“It means a lot to just go five,” Mularz said. “It keeps us fresh. With (Friday) being a day off, we’ll be ready.”

Corey Langenburg had two hits and four RBI to lead Glenn. Matt Fisher, Ben Cnudde and Mularz each had three RBI, and Tanner Gilles, the eighth batter in the lineup, went 4-4.