GROSSE POINTE – Neither Frank Sumbera nor Dan Griesbaum were raised in Grosse Pointe.

But no one, at least at the high school level, has done more to enhance and promote baseball in the Pointes than this long-serving pair.

This last statistic is notable in a sense that the two programs are often paired in the same District, as they are this season. South will host North in a Division 1 District Semifinal at 10 a.m. Saturday.

This season there is an added twist to the much-anticipated community showdown. Grosse Pointe Woods University Liggett, for the first time, will compete in the Division 1 tournament lined up on the other side of the bracket from North and South. University Liggett will play Detroit East English in the other Semifinal at 11:30 a.m. The winners will play for the title approximately 2 p.m.

University Liggett won four MHSAA Finals titles the past six seasons, two in Division 4 and two in Division 3, including last season in the latter. Coach Dan Cimini, knowing he had a strong team returning, petitioned the MHSAA to opt up to Division 1 for this season and 2018.

So far the Knights have proven they can hang at the Division 1 level. They are ranked No. 2 in the latest poll released by the Michigan High School Baseball Coaches Association.

And Cimini’s group received a break in the draw as it won’t have to defeat both North and South to win the District title.

This is Cimini’s 14th season as head coach, and he tips his hat to the job Sumbera and Griesbaum have done in laying the groundwork.

“Frank has been there forever,” Cimini said. “Dan has been there a long time. I feel old, and I’m 48. I’ve coached 22 years. No doubt about it, those guys have set the standard.”

Cimini grew up in Grosse Pointe and competed in the city’s strong Little League program. He played for Griesbaum at South and played four years in college, two at Macomb College and two at University of Detroit Mercy. He was part of the 1987 South team that reached the MHSAA Semifinals for the first time in school history.

Cimini said the quality of baseball has remained strong in the community over the years but noted there have been some changes.

“The Little Leagues are phenomenal,” he said. “The Federation ball is phenomenal. But there aren’t as many kids playing. Now there are seven teams playing in the (Little League) majors. Back when I played there were 13 of 14. I miss those days. If I could take myself back, that’s where I’d go.”

At least in the modern era, one must point to Sumbera as the person most responsible for the quality of baseball being played at the high school level.

Sumbera played three sports at Chesaning High – baseball, basketball and football – and then went on to Central Michigan where he played basketball. 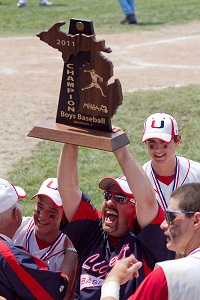 Upon graduation Sumbera went looking for a job and received a tip from a college roommate. Sumbera was told that Grosse Pointe High would be splitting into two schools, North and South, and that they needed teachers, and, naturally, coaches. North opened for the 1968-69 school year, and Sumbera was hired as an assistant junior varsity football coach. In 1973 he became the assistant varsity baseball coach, and the next season he took over the baseball program.

“We won the District that year,” he said. “I’ll never forget it. We beat (then Detroit, now Warren) DeLaSalle, 2-1, in the final.”

Sumbera has coached some of the best teams in the state. His 2006 Division 1 championship team was 38-1. His 1980 Class A championship team was probably his best. Five players on that team were selected in the Major League Baseball amateur draft including Bill Babcock, one of the top pitchers on that team. Babcock’s son, Luke, will enter the ninth grade next fall is expected to enroll at North and play for Sumbera.

That’s the way it is in the Pointes. This large community that borders Detroit’s eastside is infectious. It’s common for someone who grew up here to remain in the area and raise his or her own family.

“A lot of the kids I coached in the 80s, I’m coaching their sons,” Sumbera said. “They play a lot of baseball here. As they grow through the ranks to high school, (Griesbaum) and I have to make cuts. You might have 250 at the Little League level, and by the time I get them we have like eight.

“The North-South rivalry is as good as any around. I coach football, and it’s intense every year. In baseball it’s as good a rivalry as there is in the state. It’ll be the fifth time we will have played South (this season). In our last doubleheader we won the first, 12-6, and lost the second, 3-2, in eight innings. That was a crusher. It’s big. The kids know it. The families know it. They all go to church together and play against each other during the summer.”

Griesbaum, a graduate of St. Clair Shores South Lake and Central Michigan, where he played baseball, said the level of competition is remarkable especially when one considers the schools do not have open enrollment. The only way one can play for North or South is to live in the school district.

“There’s nothing like a North-South game,” he said. “Our rivalry is one of the best. It’s a baseball community. My 6-year-old grandson plays T-ball. You look at what North and South have accomplished. There’s the (Grosse Pointe) Farms and City (Little League) teams. Then there’s the success of the Redbirds that (former Detroit Tiger) Dave Bergman ran. We run a (Christmas) Holiday hitting camp. We have 75 kids the first day and 75 more the next. It’s for the second through the sixth grades. We want to expose baseball at an early age.”

Some have expressed displeasure that all three Grosse Pointe schools are in the same district. Cimini scoffs at that thought. He said there are many districts throughout the state that have more than their share of quality teams.

The last two seasons North and South were in separate Districts, and they won their respective Districts both years. In 2015, they met in a Division 1 Quarterfinal, and South won. It was the Blue Devils’ seventh trip to the Semifinals, a record (tied with Saline and Grand Ledge) for a public school in Division 1/Class A.

Cimini said he’s looking forward to seeing what his team can do against the established powers.

PHOTOS: (Top) Grosse Pointe South's Dan Griesbaum, left, and North's Frank Sumbera both have led their respective programs for more than three decades (Sumbera for more than four). (Middle) University Liggett coach Dan Cimini played for Griesbaum at South and has built a top program in the community as well. (Photos courtesy of the Griesbaum family, C&G Newspapers and the University Liggett baseball program.