EAST LANSING – Grosse Pointe Woods University Liggett has much to play for this season. As the favorite entering the Division 3 tournament, the Knights have had their eyes set on winning the school’s fourth title in six years.

On June 1, their focus became even sharper.

The father of University Liggett coach Dan Cimini died of cancer that day, leaving the team stunned and Cimini torn between the sorrow that was within him and his obligation to his team.

The pain remains for Cimini and his players, and the Knights are still on course to win that title.

Anthony George shook off a few first-inning jitters and threw a complete-game four-hitter to lead the Knights to a 9-0 victory over Scottville Mason County Central in a Division 3 Semifinal on Thursday at McLane Stadium on the campus of Michigan State University.

University Liggett (31-4) will play New Lothrop in the Final at 5 p.m. Saturday.

New Lothrop defeated Jackson Lumen Christi, 6-1, in the other Semifinal.

George, a sophomore right-hander, hit the first batter, walked the second and loaded the bases before Cimini took a trip to the mound.

“I told him to take a deep breath,” Cimini said. “He was amped up. Everyone was.”

George retired the next two batters, and no other runner reached third base over the final six innings. He allowed that one walk and retired the final eight batters in order.

“I tried to overthrow,” George said. “Coach said to take a step back. I was trying to do something I’m not accustomed to. With the defense behind me, you don’t have to strike everyone out.”

“It was a team thing,” George said. “As a family we had to take it to heart. That meeting was a big part of us getting even better.”

The Knights scored four in the third inning highlighted by William Morrison’s three-run double. That inning lessoned the pressure on George.

The Knights scored single runs in the fourth, sixth and seventh innings, and they scored two in the fifth.

“I’m so proud of them,” Cimini said. “Everyone knows that your goal is to get to the final four. Everything was geared for us to get back to the final. We’ve been ranked No. 1 all year, and we love it. We want that. When that happens you know that you get (the opponents’) best.”

“That’s not what we normally do,” Central coach Don Thomas said. “We usually throw strikes.

“We have nothing to hang our heads about.”

Cam Pope leaned on the experience gained from pitching in a 2014 Semifinal to pitch a complete game victory in this year’s Semifinal on Friday.

Pope pitched 6 1/3 innings in 3-1 victory over Maple City Glen Lake two years ago to get the Hornets to the title game. 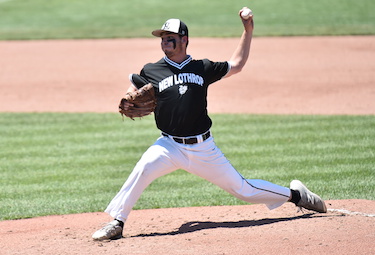 He allowed eight hits, three walks and struck out six against reigning champion Lumen Christi. Pope ran into trouble in only two innings, and Lumen Christi (25-14) ran itself out of a potential big inning in the third.

With one out, starting pitcher John Fleming doubled for Lumen Christi. He scored on Connor Mogle’s triple to tie the game at 1-1. The third hitter in the lineup, Zach Mehelich, batted next, and when a Pope pitch got away from catcher Zac Besant, Mogle tried to score. Besant threw to Pope, who put the tag on Mogle.

Mehelich singled but Pope got the last out.

“I was hoping to hit my spots,” Pope said. “It’s unbelievable. We knew we had a good team in 2014. We have a lot of young guys this year and didn’t know what to expect.”

The Hornets scored two runs in the fourth inning and added three in the fifth to give Pope a sizeable cushion. Max Wendling had RBI singles in each of those innings.

“It was just a perfect game,” New Lothrop coach Benjamin Almasy said. “They made plays. Our shortstop always makes plays.

“We just kind of do our thing. We believe in the name that’s on the front of our jersey.”