EAST LANSING – By the time the final weekend of the baseball season came around, Orchard Lake St. Mary’s was a juggernaut.

The young but incredibly talented Eaglets showed that by defeating their final two opponents by a combined score of 18-1, including an 8-1 victory Saturday against Grand Rapids Catholic Central in the MHSAA Division 2 Final at McLane Stadium.

But after a 7-9 start to the season, what seemed inevitable by the end looked far from certain.

“That Ohio trip (on spring break), we really just kind of bonded closer,” St. Mary’s sophomore second baseman Alex Mooney said. “We said, ‘Enough is enough, we’re not losing anymore,’ and that’s actually what we did – we haven’t lost since. You see all the talent, you see all the (college) commitments and stuff, and it’s like, ‘Why aren’t we winning?’ Then it finally just clicked, and everything just came together.”

"It’s good putting it all together,” Eaglets coach Matt Petry said. “At the beginning of the year while we were struggling, we would get good pitching and we wouldn’t swing. Or we would swing and we wouldn’t get good pitching. For the last two months, we’ve kind of put it all together and we’ve won every type of game possible, and the guys were just really confident coming into this weekend.”

That confidence was evident Saturday, as the Eaglets were always in control against the Cougars thanks to strong hitting and a stellar pitching performance from freshman starter Brock Porter. In six innings of work, Porter struck out seven while allowing five hits, three walks and one run.

“I definitely have confidence in Brock,” Mooney said. “He’s no normal freshman, so I don’t think the stage ever gets too big for him. He’s going to be a stud.”

Senior Dillon Kark closed the game, allowing one hit before forcing a double play ball to end the seventh inning.

Petry said he had complete confidence in Porter, despite his age, but he also knew he had the full strength of his deep pitching staff at the ready thanks to a complete-game outing from Thursday’s starter Logan Wood. 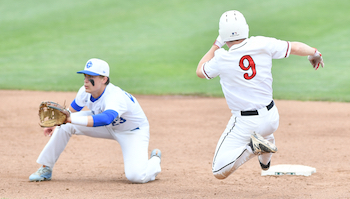 “Brock has thrown great for us,” Petry said. “That was his first start in the playoffs, but he had three wins prior to today in relief. We really couldn’t make a bad decision, whether we wanted to start Brock or Anthony Fett or Mikey Gall, we were confident in all those guys, but we went with Brock. It started with Logan Wood on Thursday going a complete, that way we had the whole rest of our staff available. Some very talented guys and guys with experience. After Brock we had Dillon Kark closing it out, which was very valuable.”

St. Mary’s bats wasted little time getting going, as they scored two runs in each of the first three innings to jump out to a 6-0 lead.

Senior catcher Harrison Poeszat opened the scoring with an RBI single, and Kameron Arnold, who came in to run for him, made it 2-0 with some heads-up play. After he stole second, the throw went into the outfield and Arnold took advantage of the confusion to run home.

Mooney drove in a pair of runs with a single in the second inning, and the Eaglets added two more runs on an error in the third.

Catholic Central (27-11) got on the board in the fifth inning with a sacrifice fly from Kyle Tepper that drove in Nate Trudeau.

“We looked at their lineup before we played and we saw that the bottom of their order, 7-8-9, were seniors,” Catholic Central coach Tim MacKinnon said. “When you have seniors hitting 7, 8 and 9, you have a pretty decent ballclub, and we knew that. We had seen them play Thursday, and we knew that they would come out swinging the bat, and they did. We didn’t get the results we wanted, but we got a good effort out of Joe Collins. But a couple of balls got left up, and they tattooed them a little bit and got some runs early. Then we had to fight back from there.”

Mooney led the way for St. Mary’s with three hits, while Schubert had two. Cole Sibley added an RBI.

“We had a great season,” MacKinnon said. “We ran up against a really nice ballclub. Matt Petry does a good job with his team, and they played all aspects of the game very well. Porter did a great job, they hit the ball extremely well today and played good defense. After the game, I told (my team) they had a good season, and you don’t throw one season into a situation where one last game means everything for the season.”