His talented teammates did the same on the base paths.

“It was a good outing, and I was dialed in,” said Allman, who’s headed next to Jacksonville University. “I trusted my team behind me, and everything was working; the off-speed, curveball and slider.

“This is the best way to end it, with a state championship. The whole year we battled, and we pulled it off. I’m proud of my team.”

Allman surrendered only two hits in 6 1/3 innings of work. He struck out seven and didn’t allow a walk. 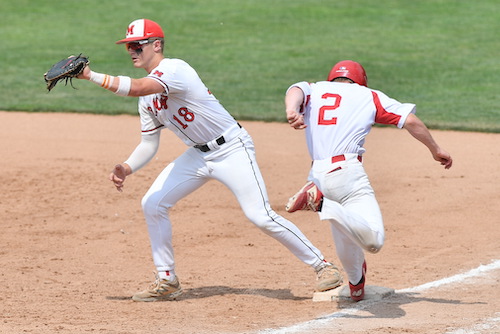 “It was a heck of a performance from Tommy; that was awesome,” St. Mary’s coach Mike Petry said. “The plan was to split the game among three guys, but Tommy was throwing so well that we didn’t do that. I made the decision to take him out (in the seventh), and he got a great ovation.”

The Eaglets finished with 12 stolen bases. The total eclipsed the previous Finals record of nine, set by Colon in the 1989 Class D Final against Gaylord St. Mary’s.

Alex Mooney and Ryan Mooney both tied the Finals individual record with three steals each.

“We work out all year trying to stay athletic, and I feel like it really helps,” said Alex Mooney, who scored twice and had two RBI.

“From the first inning we knew we were getting good jumps and their pitchers were not doing the best job of keeping us on. We got our timing down, and we knew we could swipe bags and we did.”

Nolan Schubart broke a scoreless tie in the fourth inning with a two-RBI double.

“Nolan is a stud, and I had all the confidence in the world that he was going to get a hit there,” Alex Mooney said. “It was a huge hit for us, and it really got us going and started that big inning for us.”

Ryan McKay followed with another double to drive in a pair and make it 4-0.

The Eaglets finished with six runs in the inning, then added another three in the sixth.

“This was the ultimate goal,” said Petry, whose starting lineup was loaded with Division I college talent.

Freshman Noah Chase started on the mound and went 3 ⅔ innings for the Lancers.

Lakeshore, which committed three errors and had only two hits, finished the season at 28-12 overall. The loss was its first in a Final after winning back-to-back Division 2 titles in 2017 and 2018 and a Class B crown in 1990.

“Going into the fourth, we felt really good about ourselves and the game plan was working,” Lancers coach Mark Nate said. “I’m proud of our kids for the way they fought early, and then their true talent came out and that's the bottom line.

“That team is a very, very good baseball team, and they’re deserving of winning it all.”