EAST LANSING – Petersburg Summerfield pitcher Brock Olmstead said he was a little surprised when he got the ball to start Friday’s Division 4 Semifinal, thinking it would be Bulldogs ace Derek Clark who took the mound with a trip to the Finals on the line.

His coach, Travis Pant, feels his team has two aces, however, and his confidence was rewarded as the sophomore threw a two-hitter to lead the Bulldogs to a 5-0 win over Gaylord St. Mary and their first-ever championship game appearance.

“I kind of thought he was going to put Derek to throw in front of me, because we want to get there before we can actually play there,” Olmstead said. “I was happy that he trusted me, and he threw me out there, and it worked out good.”

Summerfield (27-4) will play Saturday against Saginaw Nouvel, which defeated Decatur 4-2 in the second Semifinal at McLane Stadium on the campus of Michigan State University.

Olmstead entered Friday’s game with a chip on his shoulder, carried all the way from last year’s Quarterfinal, a 3-2 loss to St. Joseph Lake Michigan Catholic. Olmstead took the pitching defeat in that game and said he’s had the final scoreboard saved as the lock screen on his phone ever since.

“I just have all the confidence in the world in Brock,” Pant said. “He lost the Quarterfinal game last year, so I was going to give him a chance for some redemption. He’s been throwing great for us all year, and we’re solid defensively when he pitches because I get to put Derek in center field – he made a couple plays today that you just kind of shake your head at. But that was the decision, that’s what we’ve been rolling with and I wasn’t going to change anything because I didn’t want him to think I didn’t have any confidence in him. He’s been throwing Game 1, and Derek will throw Game 2.”

Clark had three hits, one RBI and two runs scored Friday. Olmstead struck out five, allowing the two hits and one walk, facing just 24 batters in seven innings of work.

He also had some early run support, as the Bulldogs jumped on the Snowbirds (26-6) right away. Brendan Dafoe led the game off with a single, followed by a bunt single from Clark. They were both driven in two batters later by Ethan Eyler.

It was the top of the order that was responsible for all of Summerfield’s runs, as the Bulldogs struck again in the third inning. Clark and Eyler each had an RBI triple in the frame, putting the Bulldogs up 4-0. Another run was added in the fifth when No. 5 hitter Mark Keller drove in Dafoe with a sacrifice fly.

Dafoe and Clark each ended the game with three hits, while Eyler had two.

“Our early leads, we’ve been doing that all year,” Eyler said. “I think it’s really key for us to get the early lead and then keep adding on and on. The top of our order is really killing it right now. Everyone one through nine is a hard out.”

Drew Koenig and Logan Murrell each had a hit for St. Mary. Koenig took the loss, striking out five while allowing nine hits.

The Snowbirds were making their fourth straight Semifinal appearance and could see every player who started Friday’s game return next season.

“Obviously next year is next year, but we have the same crew of kids coming back for the most part,” St. Mary coach Matt Nowicki said. “Our plan is next year to work just as hard and get here again.” 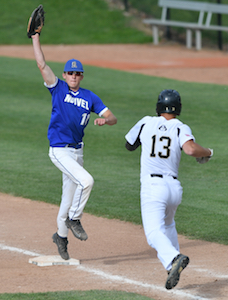 Brady Alverson and his Saginaw Nouvel teammates didn’t see themselves as a below-.500 team entering the postseason, despite their 9-16-1 record.

“We didn’t really think about our record,” the Nouvel sophomore said. “We knew going into the postseason it starts 0-0. It doesn’t really matter what our record is, it just matters who wins the most games in a row.”

Thanks to a big fifth inning and a resilient pitching performance by senior Jacob Burr, Nouvel has now won five in a row, and a sixth win will give them a Finals title and a .500 record.

“Our regular season, we played a lot of tough teams,” Nouvel coach Shawn Larson said. “We try to do that, too. Not only is our conference tough, but when we’re scheduling out-of-conference games, we want to play good teams. That makes us better, because we know come playoffs, everybody is 0-0 and we all have a shot.”

The Panthers made the most of their shot with a two-out rally in the top of the fifth inning, which provided all four of their runs. Alverson started the scoring with a bases-loaded double, which plated two runs, and in the next at-bat, Justin Osmond singled to drive in two more and make the score 4-1. Prior to that inning, the Panthers had managed just one hit against Decatur pitcher Jakob Southworth.

“I was just thinking of a way I could help my team,” Alverson said. “I was looking for a fastball on the inner half of the plate and tried driving it. I was a little late on it, and I put it in the left-center gap. When it hit the ground, I knew we were going to score, and it was just a rush of adrenaline going through my body as we scored that run.”

That was enough for Burr, who bounced back after allowing a solo home run to Southworth in the first inning that cleared the scoreboard in left field. Burr finished the game with four strikeouts while allowing five hits and two runs in seven innings.

“That’s kind of like the theme of our season: can we come back after being punched in the mouth,” Larson said. “Overcoming some adversity has been huge for us, and I credit the entire season for how we responded right then. There was a time when this team would have shut it down, but not anymore.”

Decatur did add a run in the bottom of the sixth inning, as Benjamin Cerven scored on a double steal following a strikeout.