Tyler Sager isn’t worried about jinxes. He’s worried only about the next hitter.

So, it’s safe to talk about the fact that, after a win Monday against Mount Morris, the Chesaning senior hadn’t allowed a hit since April 11.

If not for the incredible success of his own team, that would be the MHSAA record for consecutive no-hitters. The second one, however, came in a 19-0, three-inning win against Durand, and games must go five innings to count for the record books.

“It’s motivating to a point, but at the same time, I can’t go out there every time like I have to throw a no-hitter today,” Sager said. “I’m just going to go out there, throw hard and see what happens. The goal every game is to get through five and set it up for the back-end guys.”

Sager, an honorable mention all-state selection a year ago, is off to a torrid start this spring. He’s thrown 35 innings, allowing four hits and three walks while striking out 92. In his two starts that didn’t end as no-hitters, he struck out 19 and 20 batters.

The MHSAA record for consecutive no-hitters is three, held by six pitchers. Coleman’s Ryan Hasenfratz has the record for most no-hitters in a season at six, which he set in 2005. Three pitchers hold the career mark at eight.

Not including the three-inning no-no, Sager has five career no-hitters, as he threw two as a junior.

“He does a real good job of hitting his spots, and honestly, he’s been able to overpower people here lately,” said Chesaning coach, and Tyler’s dad, Robert Sager. “Being able to hit his spots the way he does really helps, and he’s able to keep hitters off balance a little bit. When he’s able to bust them inside, he’s pretty tough. Then he’s started throwing a slider in there, and that’s really helped him.” 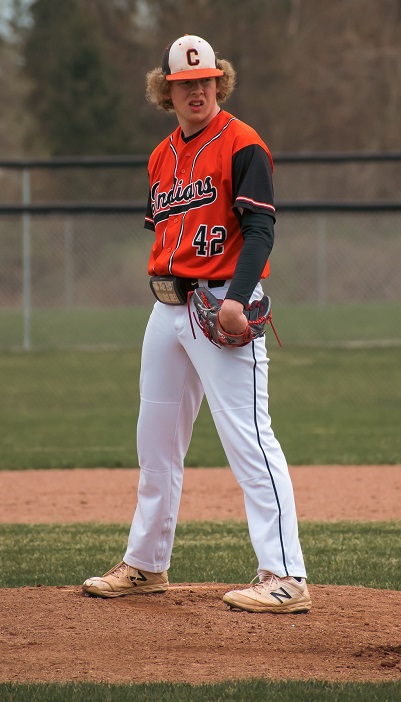 Tyler expected big things from himself coming into the season. But even he’s a bit surprised by this level of success.

“After last year, I was really excited to get back,” he said. “I was honorable mention all-state last year as a pitcher, and we have an all-state wall (at the school), and it’s been one of my goals ever since high school started – my dad (football) and aunt (Melissa Sager, softball) are up there, and I want to be up there with them. So I’ve always had those goals, and I wanted to get better, but I didn’t think I’d start this hot.”

The team is also off to a hot start, going 14-1-1 and allowing a total of three runs over its past six games.

That hasn’t changed the goals for Chesaning, although it may have given the players a bit more confidence to achieve them. Winning a Mid-Michigan Activities Conference title, winning a District title and competing for a Regional championship were always on the board, and remain so.

“Coming in, I thought we’d be good,” Tyler said. “We’re really young. The main group of our team, when we were younger, (Robert Sager) was our little league coach, too. He’s kind of always been there coaching-wise for a lot of us. We’ve been pretty hot lately, and it’s been fun. But I can’t say I expected to be 14-1-1.”

After his senior season concludes, Sager will move on to Northwood University, where he has signed to play baseball. And, for the first time, he’ll be able to focus all of his attention on pitching, as he also plays football and basketball for Chesaning.

“Personally, I think (Tyler’s ceiling) is pretty high,” Robert Sager said. “Being a three-sport athlete, he hasn’t been able to only focus on it, so there’s still a lot that he’ll develop and a lot he’ll improve on when he goes to Northwood and they really start working with him on pitching and being a pitcher.”

Tyler Sager is excited for the opportunity, too, but his focus remains on this season. On the next hitter.

“I’ve always kind of thought that if I can only play baseball, that obviously I would get a lot better in the first year or two, just because I haven’t been able to focus on one thing,” he said. “But, honestly, I haven’t thought too much about it yet.”

PHOTOS (Top) Chesaning pitcher Tyler Sager makes his move toward the plate. (Middle) Sager looks in for the sign from his catcher. (Photos courtesy of the Chesaning baseball program.)