But one of the team’s most special moments this fall came a few days before during the Warren Mott “Last Chance” meet – which ended up being Laura Nemes’ first chance to run this season after summer surgery to remove a brain tumor.

Nemes, a junior who had been on the team the previous two seasons, told teammates during June conditioning sessions that her goal for the fall was to run, or at least walk, in one meet this season. She’s been referred to lately as “Miracle” Nemes and no doubt gave her teammates an inspirational boost as they chased her and cheered her Oct. 29 – four days before the team finished 16th in Division 2, a five-spot improvement from 2012.

The Detroit Free Press spoke last week with Nemes, who told of the support she received from her team in what can often be considered an individual sport. Click to check it out.

Prep Rally winners to be honored

The Fenton girls swimming and diving team – winner of this summer's inaugural “Prep Rally” contest, has chosen to be recognized during the Lower Peninsula Division 1 Final on Nov. 23 at Oakland University.

The team had the option of receiving tickets to attend an MHSAA Final in any sport, and chose Oakland so those not competing will be able to cheer on their teammates.

The contest was part of the MHSAA’s Preparation Lasts All Year campaign aimed at promoting preseason preparation so athletes are physically ready and in the fall acclimated to hot weather when practices begin. The Tigers’ swimmers and divers trained all summer for a “survival trip” at Pigeon River Country State Forest near Vanderbilt that included miles of hiking, some lake swimming and plenty of bonding during challenges set up to get the future teammates working together.

We're always looking to bolster our record books, and we've finished some major construction to our Finals records for cross country.

Both cross country record books have been significantly bulked up. Find now the fastest 5K Finals times for every division and class and an all-time top 10 since that became the length of MHSAA races. Also added were records of most team championships won and longest championship winning streaks. Click to see the additions to the girls and boys records.

We don’t have a specific occasion or reason to show this photo except that we like it.

The shot, taken by Lansing-area photographer Alan Holben, shows a Mason player helping up an Okemos player during one of the biggest regular-season soccer games in mid-Michigan this fall. 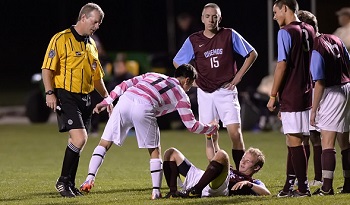 Mason and Okemos have a rivalry similar to the most heated from any part of the state – the communities are adjacent, the schools are similar in size and both generally are competitive in a number of sports. Their soccer teams generally are considered among the state’s elite on an annual basis, and there is plenty of history between them. Plus, the two don't really care for each other much.

We hear more frequently about cases of bad sportsmanship. So it’s always a good time to point out there’s plenty of good out there as well.